Men are creepy.  That’s a scientifically measured social valuation in late-twentieth-century America.  Biological anthropologists have established that males are demonic.  Moreover, according to medieval French literature, men’s genitals are ugly.  Not surprisingly, men experience much more frequently sexual rejection than women do.  Men must strive for the love to which women are naturally entitled.  In the context of this reality, Boccaccio’s Decameron tells the story of a gentleman named Gentile, the beautiful lady Catalina, and her husband Niccoluccio.[1]

Gentile became enamored of Catalina.  She did not requite his love.  In despair, Gentile left his home city, Bologna.  Catalina became pregnant.  After  a number of months, she suddenly became gravely sick.  In a short time, several doctors pronounced her dead.  Catalina was buried in a church in Bologna.

Gentile responded to the news of Catalina’s death with self-abnegation.  He was overcome with grief.  Then he said to himself:

So there you are, Madonna Catalina, you’re dead.  Well, I never managed to get as much as a single glance from you while you were alive, but now that you’re dead and can’t defend yourself, it’s only right that I should take a kiss or two from you.

The double assertion of “dead” underscores how Catalina defended herself in life.  Catalina refused to acknowledge Gentile’s presence.  The dead can also do that.  In life, Catalina’s defense against Gentile was her live threat of actively scorning him.  Social power, not physical power, is how women keep men subordinate.

Gentile dramatized men’s sexual interests being put to death.  During the night, he secretly journeyed to Catalina’s tomb.  He opened the tomb and went inside:

lying down beside her, he drew his face close to hers and kissed her again and again, all the while weeping profusely.

The narrative here injects, even for a deprived, weeping man within a tomb, the voice of social disparagement of men’s sexuality:

But as we know, men’s appetites — and especially those of lovers — are never content to stay within bounds, but always want to go further

That’s the same social voice that today suggests that nearly a quarter of men deserve punishment for rape, if enough prisons could be built to hold them.  Gentile vacillated, and then transgressed the suppressive moral bound:

just as he was deciding that it was time to leave, he said to himself: “Ah, why don’t I fondle her breast a little, seeing as how I’m in here?  I never touched her in the past, and I will never have the opportunity to do so again.”

overcome by this desire, he placed his hand on her breast, and after keeping it there for some time, he thought he could sense her heart faintly beating.  Having subdued his fears, he began examining her with greater care and discovered that she was in fact still alive, although the signs of life in her were minimal and very weak.  Consequently, as gently as he could, he removed her from the tomb with the aid of his servant, and having set her across his horse in front of him, he carried her in secret to his house in Bologna.

Gentile didn’t carry Catalina secretly to his house in order to ravish her.  Gentile’s mother lived there.  She revived Catalina.[3]  Catalina subsequently gave birth to the son conceived before she was buried.  With a new orientation to love, Gentile declared to Catalina:

I propose to stage a solemn ceremony in which I will make a precious gift of you to your husband in the presence of all the leading citizens in the town.

The solemn ceremony enacted in allegory the Christian Holy Week, with Catalina as Jesus:

Little prized by her own people, she was thrown out, like something vile and worthless, into the middle of the street from which I retrieved her, and through my care, I saved her from death with my own hands. Recognizing my pure affection, God has transformed her from a fearsome corpse into the beauty you see before you.

By established legal reasoning, which Catalina’s husband Niccoluccio publicly endorsed, Catalina belonged to Gentile.  In Christian understanding, the law of God the Father is fulfilled in God’s loving gift of Christ.  Gentile gave Catalina and her newly born son back to Niccoluccio.  God’s gift of Christ is the higher meaning of Gentile’s gift. Gentile saved Catalina “with my own hands,” with “pure affection.” In all his masculine creepiness, Gentile acted as an earthly deputy of God the Father in the new Christian dispensation.[4]

The Decameron’s tale of Gentile, Catalina, and Niccoluccio isn’t just a love story.  It’s an allegory of the Christian Holy Week deliberately stretched against social disparagement of men’s love.  Gentile implicitly acknowledged this stretching.  To proclaim Catalina’s chastity, Gentile swore “by that God who perhaps made me fall in love with her so that my love might be, as indeed it has been, the cause of her salvation.”  The “perhaps” and “might be” signal questioning.  Uncertainty about the allegory is reasonable.  But the story is “as indeed it has been.”[5] 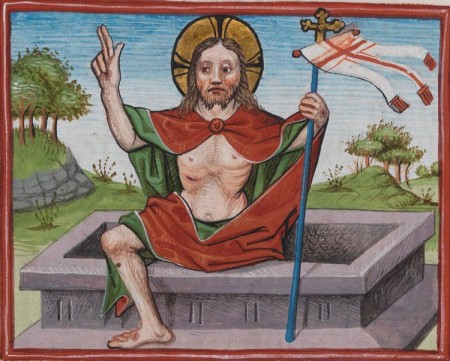 [1] Giovanni Boccaccio, Decameron, Day 10, Story 4.  The story gives Gentile’s full name as Messer Gentile de’ Carisendi.  Niccoluccio is given as Niccoluccio Caccianemico.  Both Carisendi and Caccianemico were historically the names of noble families living in Bologna.  Rebhorn (2013) p. 937, n. 2.  The English form of the Bolognese name Catalina is Catherine.  The subsequent quotes are from the story as translated from Italian in id. pp. 771-8.  Here’s an online version in the English translation of Riggs (1903), with section links to the Italian text. This story shares the false entombment motif with the twelfth-century French romance Floris and Blancheflour {Floire et Blancheflor}. Boccaccio also used it in his Filocolo in its thirteenth question of love.  There the story is oriented toward rhetorical debate.  In the Decameron, allegorical enactment trumps the forensic conclusion for the story.

[2] For a violent approach to this text in the service of supporting dominant academic misandry, see Moe (1995).

[3] Gentile’s mother skillfully revived Catalina “with the aid of a series of warm baths and a good hot fire.”  Heat is a relatively simple treatment.  It’s also associated with love.  Other ancient, non-Christian accounts existed of physicians reviving the dead.  Upon reviving, Catalina begged Gentile “to do nothing to her in his house that would impair her honor or that of her husband.”  The revived young woman in Apollonius King of Tyre made a similar request.  Moe (1995) describes Gentile’s treatment of Catalina as “sexual aggression.”  That’s literally and literarily obtuse.  Hollander & Cahill (1997), p. 140, declare that Gentile “paradoxically ‘saved her {Catalina’s} life’ as a result of his necrophiliac exploitation of her.” Within the story, Gentile actually did save Catalina’s life.  Describing Gentile’s sexual creepiness as “necrophiliac exploitation” doesn’t provide a good starting point for understanding the significance of how Gentile saved Catalina’s life.

[4] In Isaiah 65:4, God, speaking through Isaiah, threatens just punishment for those “who sit inside tombs and spend the night in secret places.”  But then Isaiah 65:17-25 declares a new creation: “I am about to create new heavens and a new earth; the former things shall not be remembered or come to mind.” Failure to appreciate biblical allegory in the story of Gentile, Catalina, and Niccoluccio obscures a significant verbal play.  In giving Catalina back to Niccoluccio, Gentile described them as his comare and compare, respectively.  These Italian words mean both godmother and godfather and close, status-symmetric friends.  Gentile acted as a godfather for Catalina and Niccoluccio’s child. Catalina and Niccoluccio are godparents to Gentile born again in Christian love.  Catalina and Niccoluccio are both godparents and friends — comare and compare — to Gentile in the sense of John 15:15.  Cf. Rebhorn (2013) p. 777, note, which identifies the relevant meaning as only “close friend.”

in our opinion, the work {Decameron} should not be read as an allegory that conforms to Christian exegetical norms.

Hollander & Cahill (1997), pp. 112-3.  Lauretta tells the story of Gentile, Catalina, and Niccoluccio.  As the example of Marie de France also illustrates, women have often appreciated men more than men have.

[image] Jesus emerging from the tomb.  From the Prayer Book of George II of Waldenburg. Waldburg-Gebetbuch, WLB Stuttgart, Cod. brev. 12, fol. 111v, dated 1486.  Thanks to Wikipedia and Württembergische Landesbibliothek Stuttgart.

Hollander, Robert, with Courtney Cahill. 1997. “Day Ten of the Decameron: The Myth of Order.”  Pp. 109-168 in Hollander, Robert. 1997. Boccaccio’s Dante and the shaping force of satire. Ann Arbor: University of Michigan Press.