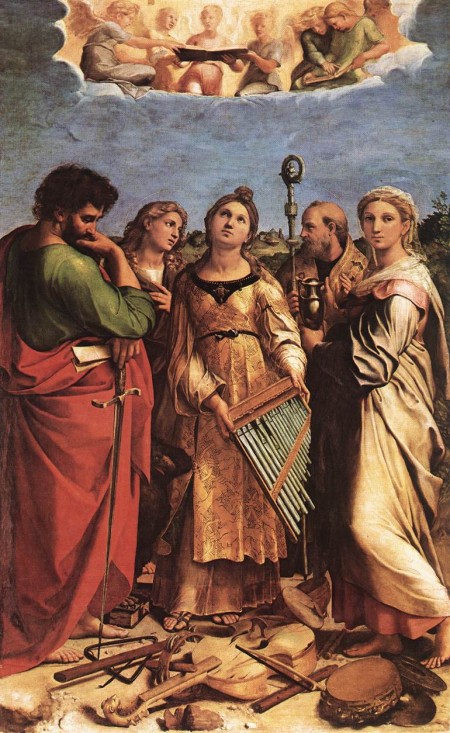 Despite her association with Bona Dea and her going through with her marriage to Valerian, Cecilia wanted to remain a virgin. She sang in her heart to God alone:

Keep my heart and my body spotless, and let me not be mixed-up. [3]

She started wearing a hair shirt under her golden clothes. She fasted and prayed and sought the support of holy women and men in heaven:

She summoned the angels with prayers, disturbed the apostles with tears, and prevailed upon the entire holy procession serving Christ, that with their prayers they would help her commend her chastity to the Lord. [4]

Cecilia seemed to have believed that having sex with her husband would contaminate her. That’s a demeaning view of men’s sexuality.

The most widely distributed medieval version of Cecilia’s life doesn’t even bother to explain why she married Valerian if she didn’t want to have sex with him. But a version that probably dates from the late fifth century explains:

The resolve of her family and fiancé was raging around her with such force that she could not reveal the desire of her heart or disclose by clear indications that she loved only Christ. [5]

In medieval Europe, loving only Christ was highly respected. Moreover, a woman couldn’t be married without her consent. Perhaps Cecilia was too meek to declare her dedication to Christ and refuse to consent to marriage with Valerian. But even by the relatively weak standards for rationalizing women’s behavior, that’s completely implausible.

Cecelia showed on her wedding night that she was a strong, independent woman. Celicia and Valerian were then together in the bedroom for the first time as husband and wife. She said to him:

O dearest and most loving young man, I have a secret to tell you if you will swear to do everything in your power to keep it hidden.

Was it that her mother wanted to move in with them? But that couldn’t remain a secret. Perhaps a venereal disease? Pregnant already? Several secret children with other men? Valerian, mind racing with possibilities, swore to keep Cecilia’s secret. Cecilia then said:

I have an angel of God as my lover, who guards my body with extreme jealousy. If he should see any indication that you touch me with polluted love, he will immediately release his rage against you, and you will lose the best part of your wonderful youth. But if he knows that your love for me is pure and spotless and that you keep my virginity completely unimpaired, then he will love you just as he loves me and will show you his favor. [6]

A lover already? An angel lover? A bisexual angel lover? Manly men don’t put up with this kind of bizarre crap from their wives. Valerian declared:

If you want me to believe your words, show me this angel; and if I determine that he is truly an angel of God, then I will do as you say. But if you love another man, I will run you both through with my sword.

Valerian probably lacked good legal alternatives for terminating his marriage and receiving compensation for the damage done to him. If you want peace, work for justice in divorce courts.

Cecilia led Valerian to believe and see her angel lover. Sex is so simple that all kinds of animals do it. Seeing an angel lover required a multi-step process. Cecilia explained to Valerian:

If you promise to follow my advice, permit yourself to be purified in the unfailing wellspring, and believe there is one God in heaven, living and true, then you will be able to see him.

Lord Jesus Christ, good shepherd, sower of chaste purposes, receive the fruit of the seeds which you sowed in Cecilia. Lord Jesus Christ, good shepherd, your handmaiden Cecilia zealously serves you like a disputatious sheep. For her spouse, whom she received as a fierce lion, she has sent to you as a very gentle lamb. This man would not have come here if he did not believe. Therefore, Lord, open the gate of his heart to your words, that he may recognize you as his Creator and renounce the devil with all his vainglorious displays and idols. [7]

Valerian proclaimed: “One God, one faith, one baptism; one God and Father of all, who is above all and in us all.” He believed as all Christians believe. More distinctively, instead of a fierce lion for a husband, Cecilia got a very gentle lamb. Wimpy husbands who see their wives’ lovers as angels help to sustain sexless marriages.

Like Valerian and Margery Kempe’s husband, many husbands today have sexless marriages. These aren’t marriages in which their wives have angel lovers. Their wives simply refuse to provide affirmative consent, in accordance with all duly established sex regulations, when their husband requests permission to initiate an act of marital sexual relations. In such circumstances, husbands should seek an angel lover and strive to imitate Cecilia, a widely celebrated saint.

[1] The church of Saint Cecilia in Trastevere was regarded as having been built upon the house in which Cecilia lived. Archaeological investigation showed that underneath the church are ruins of an important shrine to Bona Dea. Connolly (1994) pp. 40-51.

Bona Dea, also known as Fauna and Fatua, came to be associated with various myths. One myth suggests that Bona Dea (Fauna) was the wife of Faunus. Faunus found her secretly drinking wine. As punishment for that offense, he beat her with myrtle twigs. Plutarch, Roman Questions 20. A more exaggerated variant has Fauna drinking a “a full vessel of pure wine.” Her husband Faunus then beat her to death with myrtle. He subsequently deified her out of regret for his violence against her. Versnel (1994) p. 273.

Another Bona Dea myth anticipates discourse about rape culture. This myth is factually inconsistent with the previous one:

It is said too that she {Fauna / Bona Dea} was the daughter of Faunus, and that she resisted the amorous advances of her father who had fallen in love with her, so that he even beat her with myrtle twigs because she did not yield to his desires though she had been made drunk by him on wine. It is believed that the father changed himself into a serpent, however, and under this guise had intercourse with his daughter.

Macrobius, Saturnalia 1.12.20-9, from Latin trans. Brouwer, from Versnel (1994) p. 273. Common features of the myths are mythic claims about men’s violence against women and mythic depictions of men’s moral inferiority to women.

Publius Clodius Pulcher, a young patrician, barely escaped alive after, dressed as a woman, he attended the Bona Dea ritual. For a conventional political discussion of the incident, Yoshida (2008). The Clodius Pulcher incident with Bona Dea indicates the extent of social acceptance of violence against men and the harsh punishment of men transgressing women’s privileges.

[3] My translation from the Latin Fiat cor meum et corpus meum immaculatum, ut non confundar, from ll. 10-11 of In festo Sancte Cecilie virginis et martyris (On the feast of Saint Cecilia, Virgin and Martyr), Paris, Bibliothèque Nationale, MS. Latin 3278 (dating to later thirteenth century), in print with English translation in Reames (2005) pp. 516-27. MS. Latin 3278 is an abbreviated version of Passio S. Caeciliae, but is identical with the latter through to the middle of the Christian catechism of Valerian’s brother Tiburce. Reames (1990) p. 338. All subsequent quotes are from early in the Passio S. Caeciliae. They are thus taken from Reames’s text of MS. Latin 3278, in Reame’s English translation unless otherwise noted.

Singing in the heart has deep biblical resonances. In biblical language, the heart encompasses the whole moral orientation of the person. Singing is associated with joy and cosmic order. Ephesians 5:18-9 declares:

be filled with the spirit as you sing psalms and hymns and spiritual songs among yourselves, singing and making melody to the Lord in your hearts

For further discussion of the biblical resonances of singing in the heart, Connolly (1994) pp. 64-6. The biblical Song of Songs made clear to medieval Christians that joy in the Lord doesn’t require sexless marriage.

Passio S. Caeciliae is now thought to have been written sometime between 486 and 545. The best edition of Passio S. Caeciliae is currently generally regarded to be Delehaye (1936) pp. 194-220, based on Municipal Library of Chartres MS. 144 (from the tenth century) and Paris, Bibliothèque Nationale MS. Latin 10861 (from the eight century).

everywhere — embedded in language, in law, and in practice — is the association between heterosexual intercourse and the subordination of women.

Elliot (1993) p. 157. Tell that to Matheolus, Merlin, Aristotle, Ruodlieb, the Ménagier de Paris, two married women and a widow, and many others from medieval times. Just as with anti-men bias in criminal law, medieval men’s sexual hardships are conceptually excluded from concern:

Altogether 64 of 151, or 42 percent, of the female saints in our sample had conflicts of one sort or another arising from their sexual lives. For men the corresponding figures are 137 of 713, or just over 19 percent. The facts themselves, stated in this bare way, are eloquent. The differences bespeak both cultural prejudice and social reality.

Weinstein & Bell (1982) p. 97. Unfulfilled sexual desire is a source of enormous conflict in men’s lives. It also motivates much violence against men. Apparently such conflicts didn’t count in “conflicts … arising from their sexual lives.” That reflects cultural prejudice and social reality: the relatively low social value of men’s sexuality.

[5] This text also isn’t in the life of Saint Cecilia in Jacobus de Voragine’s Legenda aurea. The Legenda aurea version was very widely distributed. While nearly contemporary collections of saints’ lives have survived in only a couple of dozens of manuscripts:

Jacobus’s Legenda Aurea, by contrast, has survived in almost a thousand manuscript copies of the Latin text alone, with another five hundred or so manuscripts containing translations of all or part of the Legenda into one or another of the great European vernaculars.

the ambiguity about the gender of the speaker in the Prologue, rather than indicating incomplete revision, might have been purposefully left by Chaucer because it sets aside gender boundaries that create exclusive categories.

[6] The Legenda aurea version of Cecilia’s life is more direct about the threat to Valerian: statim feriet te (“he will immediately kill you”), my translation from Latin text at Reames (2006) p. 205.

That the word was originally ovis seems evident from the context, for Christ has just been addressed as a “good shepherd” who is attended by Cecilia, and Valerian has been changed from lion to lamb — all rather more in keeping with the activity of a sheep than a bee.

In the early Life of Cecilia, the disputatious sheep Cecilia used her argumentative skills to convince Valerian to accept a sexless marriage. That’s significant for understanding men’s subordination to women. The shift to Cecilia the “busy bee, without guile” reflects Chaucer’s anti-meninism, along with the more general women-are-wonderful effect.

[image] Ecstasy of Saint Cecilia in sexless marriage with Valerian. Raphael, 1516-17. Held in Pinacoteca Nazionale, Bologna. Thanks to Wikimedia Commons.

Yoshida, La’akea. 2008. “Clodius Pulcher: Caesar’s Willing Puppet. The Bona Dea Affair and Its Effect on Cicero and the Fall of the Republic.” Hohonu: A Journal of Academic Writing. 6(2): 3-8.