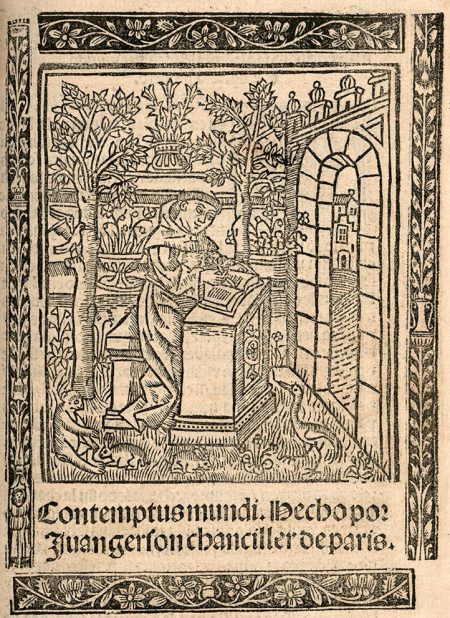 Medieval Europe, like most human societies, was profoundly gynocentric. Yet medieval Europe was relatively tolerant of dissent compared to codes of conduct now pervasive in the U.S. and similar societies. Medieval forefathers of today’s MGTOWs wrote explicit statements of contemptus mundi (contempt for the gynocentric world) in which they sharply criticized women and urged men to withdraw from the gynocentric world.

Beneath superficial titles, women in actual practice are the leaders in gynocentric society. Men follow women and obey them. So it was with Eve and Adam in medieval Christian understanding:

But Eve was destruction to him whom she ought to have helped,
and having sunk first, she sank her spouse in the depths.
And, since deceptive words of a deceptive wife tend to deceive,
she willingly deceived hers in this way.
A wicked enemy makes the woman wicked, and the man by the woman.
Each believes the wicked one, and each is made wicked.
The enemy deceives him through her while destroying them.
He takes both from God; he gives both to himself.
The enemy tempts, the woman delights, the man obeys,
and because of this triple wound of death, humanity sins. [2]

Both the woman and the man sin. But the man sins through obeying the woman. With men subservient to women in gynocentric society, sin is thus prevalent.

Perceiving grave gender injustices and righteously angry, medieval MGTOWs advised men to protect their lives by fleeing from women. Medieval MGTOWs refused to idolize women, and they frankly acknowledged women’s power over even the strongest men:

Listen to my teaching if you want to avoid ruin.
Woman is a fragile thing, a slippery thing, a childish thing;
fickle, wilful, with nothing in her but quarrel.
She snatches your heart and takes it away and softens chests of iron.
The first woman cast the first man down to the bottom.
Woman vanquished Samson, David, and Solomon.
You are not greater than Samson, David, and Solomon.
Woman deceived our trusting, first parent.
If you seek the Lord, flee from conversation with women.
Their conversation is nothing but bitter venom.

Shun flighty Venus, flee the enticing woman,
a despised thing, a changing thing, a hurtful thing.
In every way she is a thing full of knots,
a poisonous thing, a worthless thing, a wicked thing.
No one imbued with love can maintain moderation,
and he thinks what harms him can be delightful.
Since you are an image of God, an illustrious thing worthy of victory,
an heir of heaven, a companion and jewel of the saints,
despise her glittering apparel and deceitful face.
The shining beauty outside is inwardly full of sorrow,
shit, and muck, very much like a beast of the herd.
Despise the stench of Venus, follow Decency.
The first makes the mind insane, breaks the body, and empties it.
The other causes the mind to flourish along with the body.

Biological evolution has made males and females for each other. Most men don’t regard women as a fish regards a bicycle. Yet under oppressive gynocentrism, men may rationally choose to go their own way in relation to women. Men can develop their minds and bodies and be decent persons without women.

The literature of contemptus mundi makes clear that men don’t govern the world. According to today’s orthodoxy, men throughout history have subjugated women under patriarchy and treated women as men’s property. Why then did some men express contemptus mundi and seek to flee from women? One might speculate that they realized that women hate men. That’s no more plausible than believing that men hate women. The vigorous voices of men’s sexed protest throughout history are best understood as men ineffectively crying out under gynocentric oppression.

The literature of contemptus mundi rejects worldly values, vigorously declares that worldly pleasures and worldly honors soon pass away, and urges men to seek eternal goodness. Its message is blunt and forceful:

What is flesh? Vile earth. What is the glory of the flesh? Smoke.
Every honor is fleeting, excess of possessions perishes instantly.

Yet it also shows personal sympathy for men and considerable psychological insight:

Wretched me, what shall I do? I carry a wound under my chest,
a wound of stinking, inveterate sin,
as if I were carrying death under the same chest.
As often as I have cleansed it and applied plasters,
so often has the healing burst from corruption.
I have put on a thousand bandages of no value.
The skin is always burst, there is never hope of deliverance.
Every hour this soul of mine is full of sorrow.

In medieval Europe, Cupid, serving the goddess Venus, was known to shoot men in the chest with arrows to cause them to suffer love madness. From a modern, scientific perspective, desire for women is deeply rooted in men’s human nature. Having to flee women and the gynocentric world is a bitter pill for men to swallow. Yet compared to the more enlightened Middle Ages, within today’s reign of ignorance, anti-men bigotry, and superstition, more men with better reason have contempt for the world.

Chartula contemptus mundi was composed in the second half of the twelfth century. Pepin (1999) p. 55. It characteristically begins “This page of ours sends greetings to you, Beloved {Chartula nostra tibi mandat Dilecte salutes}.” Only the first 374 lines of Chartula contemptus mundi are included in some manuscripts. That shortened version is sometimes entitled “Poem of Exhortation {Carmen Paraeneticum}.” It is sometimes addressed specifically to “Rainald” rather than “Beloved”. Id.

Chartula contemptus mundi is associated with contemptus mundi literature that was widely disseminated in medieval Europe. Bernard of Cluny in the twelfth century wrote a much longer poem, De contemptu mundi. Before becoming Pope Innocent III in 1198, Cardinal Lotario dei Segni wrote a similarly themed poem entitled On the misery of the human condition {De miseria humanae conditionis}. Chartula contemptus mundi came to be included in the Eight moral authors {Auctores octo morales} that formed the core of late-medieval school instruction in Latin.

[2] Pepin translated peccat homo as “the man sins.” Pepin (1999) p. 73. That seems to me a significant mis-translation in the context of trino mortis uulnere and the prior verse.