In the growing movement for men’s liberation, Men Going Their Own Way (MGTOW) has been highly influential. MGTOW is an alternate lifestyle for men that emphasizes men’s intrinsic human worth. MGTOW rejects men being merely tools in service to particular women and to gynocentric society in general. The backlash against MGTOW brings the dominant forces of misandry and castration culture to wage war on men. That isn’t a new phenomenon. When men in medieval Europe pursued an alternate lifestyle, they too were attacked with misandry and castration culture. 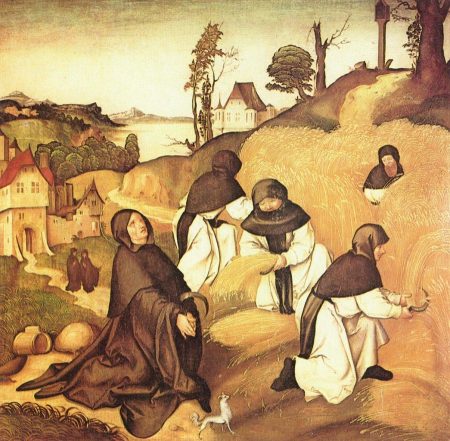 Men who sought to change their lives radically in medieval Europe could join monastic orders as conversi, also known as lay brothers. The conversi made monastic vows, but they were often illiterate and lacked deep knowledge of scripture and church teaching. Monks who were ordained as priests celebrated the sacraments, sang sacred music, and pursued advanced learning. The conversi worked in the fields and around the monastic houses to sustain the mundane life of the community. Some conversi sought to reform themselves from wrongful behavior in their prior, non-monastic lives. Others sensed oppressive, unholy circumstances in the secular world. Seeking an alternative, they became conversi.

According to the twelfth-century Latin masterpiece Speculum stultorum, the donkey Burnel threatened Cistercian conversi. Burnel had taken a path across the field of a Cistercian monastery near Lyons. The Cistercian brother Fromundus urged his dogs upon Burnel. The dogs tore into Burnel. One even bit off the end of his tail. Acting in the person of a papal envoy, Burnel cursed Fromundus for all his days.

Those converts {conversi}, better known as perverts,
and from their actions drawing certain names —
if anyone catches them outside the church,
destroy their right-side eyes and feet.
And if bells not hang around their necks,
let the penises attached to them be cut off.

Conversi were men pursing an alternate lifestyle relative to peasants and priestly monks. The papal envoy first attacked them by stereotyping them as sexual criminals. The papal envoy then sought to confine the conversi to church as if they were priestly monks. Like associating toxicity with masculinity (“toxic masculinity”), the papal envoy required that bells be attached to these men’s necks so that all would be warned of their coming. If men didn’t wear this signal of their menace, they would have their penises cut off. That’s how misandry and castration culture have functioned throughout history.

Men today have good reason to flee the lifestyle typically imposed on men. Be a worker drone, financially support women and children, and die for your country. Even before those roles were as devalued as they are today, what man would want only them for his life?  Few men would. Misandry and castration culture, among with myths of misogyny, patriarchy, and rape culture, are necessary to keep men confined within the soul-destroying structures of gynocentric society.

The above quote is from Speculum stultorum ll. 977-82, Latin text from Mozley & Raymo (1960) p. 53, my English translation, with some help from Regenos. Regenos translated those lines as:

That all those converts, rather perverts as
They’re known, get certain names to suit their deeds.
Who catches sight of them outside the church
Let him forthwith their eyes and feet destroy.
And if a bell be hung not from their necks,
Then let them be emasculated too.

In the above quote, the context of specific physical organs (eyes and feet) make clear that the proper translation for mentula is “penis.” The same is true in Bernardus Silvestris’s twelfth-century Cosmographia, Microcosmus 14.166.

[image] Medieval Cistercian conversi at work. Illustration from a psalter on the life of Saint Bernard of Claivaux. By Jörg Breu in 1500. Image thanks to Wikimedia Commons.