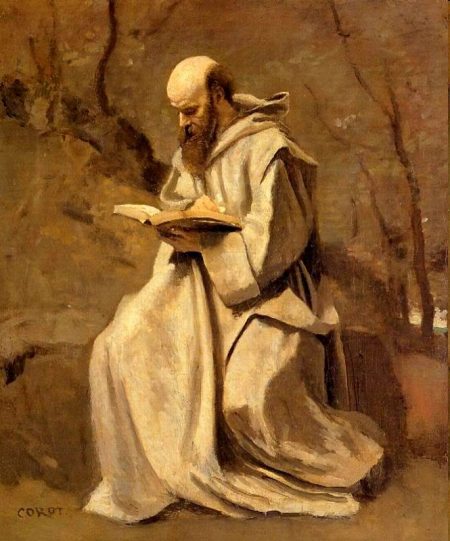 Monks serving God in the deserts of North Africa and Mesopotamia about 1500 years ago commonly regarded women as creating a hostile work environment for them. Young, attractive women sexually harassed monks and made them less productive in their prayers. While it’s difficult for many persons today to comprehend, women in the ancient world often had loving concern for men. John Moschos recorded about 600 GC in his Pratum Spirituale {Spiritual Meadow} that women acted shrewdly and fearlessly, as well as strongly and independently, to end their sexual harassment of men.

Moschos in the Pratum Spirituale told the story of a monk who was temporarily staying in the home of a Christ-loving farmer. The farmer had a daughter who was a young, beautiful woman. By her presence she so sexually harassed the monk that he “burned with desire for her.” After her father left on a business trip, the monk sought to have sex with the daughter. With sharp reason she interrogated him:

“You, brother, how long have you been in your monastery, sir?” He said, “Seventeen years.” She replied: “Have you had any experience with a woman?” and he said he had not. The maiden answered the brother: “And you wish to destroy all your labour for the sake of an hour’s pleasure? How many times have you poured poured out tears that you might present your flesh spotless and without stain to Christ? And now you are willing to dissipate all that labour for the sake of a short-lived pleasure?” [1]

The price men pay for sex, which apparently lasted longer in the ancient world than it commonly does today, isn’t just spiritual. Today, financial “child support” laws impose massive income-based taxes on men merely for having had sex. The maiden reminded the monk of the less totalitarian, less punitive version of such laws in the ancient world:

And if you do as you wish and fall into sin with me, have you the wherewithal to assume responsibility for me and to support me?

The monk confessed that he lacked the financial means to support her. But he didn’t suggest that she get a job and support him. The maiden then put forward a further legal threat: if the monk continued to seek to have sex with her, she would hang herself. This strong, independent woman forcefully declared:

you will be judged as a murderer. Rather than become the cause of so much evil, go back to your monastery. You will have plenty to do in praying for me. [2]

The monk obeyed the maiden’s order. He went back to his monastery and resolved never again to go out into the world. The monk thus never again experienced sexual harassment. He never again faced the punishment imposed on men who are sexually harassed.

In the ancient world, strong, independent, fearless women acted decisively to end sexual harassment of men. Moschos’s Pratum Spirituale tells of a young man who felt a “satanic desire” in his heart from a young woman sexually harassing him. To save the young man from his desire for her, the young woman withdrew into the wilderness. She lived there for seventeen years, subsisting only on a basket of soaked beans. She told an anchorite:

so great has been the providence of God to me that I have been able to eat of them {the beans} all this time and they have not decreased. And this too you should know, father: that His goodness has so sheltered me that in all these seventeen years no man ever laid eyes on me until you did today. Yet for my part, I could see all of them. [3]

Another strong, independent, fearless woman took even more dramatic action to end her sexual harassment of a young man. She was an anchoress and highly virtuous. She:

led a solitary life in her own home, cultivating her soul with fasting, prayers, vigils and by making many charitable donations. [5]

The anchoress, however, apparently was young and beautiful. She also occasionally left her home. She thus enabled the devil to inflame a young man “with Satanic lust for her.” That’s very severe sexual harassment. It created further harm:

The youth would wait for her outside her house. When she wished to go out, to go from her home to the oratory to pray, the youth would hinder her, forcing his attentions upon her in the way lovers do. The anchoress was so besieged by the attentions of the youth that she could not even set foot outside her own house.

To solve the problem at its roots, the anchoress fearlessly summoned the young man to her home. There she strongly interrogated him:

“Now, brother, why do you persecute me like this, sir, and why will you not even let me out of my house?” The youth answered: “Oh mistress, I want you so badly! Whenever I see you, I am all on fire, from head to toe.” She said to him: “What do you see in me that appeals to you so that you love me so?” The youth said: “Your eyes. It is your eyes which have seduced me.” When the anchoress heard this, that her eyes had led the youth astray, she picked up her shuttle and pierced and cast out both her eyes with it. When the youth realized it was because of him that she had put out her two eyes, he was so filled with remorse that he went away to Scêtê {a Christian monastic center in the Egyptian desert} and distinguished himself as a monk. [6]

Criminal law today tends to criminalize men both for seducing women and for being seduced by women. Yet seduction happens because women, intentionally or unintentionally, sexually harass men. Women in the ancient world weren’t passive and lacking in agency and responsibility. Women themselves took decisive action to end their sexual harassment of men.

John Moschos’s Pratum Spirituale “is probably the best known and the most neglected of the major documents describing the early centuries of Christian monachism.” John Wortley in Ihssen (2014) p. vii (Forward). Little is known about John Moschos. The available evidence suggests that John came from Damascus and was born between 527 and 565. John, along with his close friend and fellow monk Sophronios, traveled to Egypt, Mount Sinai, Palestine, Antioch, Alexandria, and Rome or Constantinople. The manuscript tradition of Pratum Spirituale is rich and diverse. No critical edition exists. On John’s biography, the text of Pratum Spirituale, and his political and religious circumstances, Booth (2014) Ch. 3, and Ihssen (2014) pp. 1-18.

[2] Moschos, Pratum Spirituale 205 is an alternate version of the story. In that version, the maiden said to the monk:

I am having my period. Nobody can come near me or bear the smell of me for the stench which mars my body.

[4] Ihssen (2014) pp. 28-33, sees this story as a chaste version of the life of Mary of Egypt. Ihssen doesn’t recognize, however, how seventeen years in the desert affects the extent to which a woman sexually harasses men. Changes in the woman’s appearance are explicitly described in the lives of Mary of Egypt and Pelagia.

[6] Christian scripture described brutal bodily self-punishment in the context of stumbling and forgiveness. On taking care not to cause another to stumble, Romans 14:13-21.

[7] Moschos described a young monk with a pure heart spending time in a tavern. An elder monk said to him:

Do you not know that you are a young man? Are you not aware that the snares of the devil are many? Do you not know that monks who live in cities are wounded by means of their eyes, their hearing and their clothing? You went into the tavern of your own free will; you hear things you do not want to hear and see thing you would rather not see, dishononourably mingling with both men and women. Please do not do it, but flee to the wilderness where you can find the salvation you desire.

Away with you, good elder. God requires nothing but a pure heart.

Pratum Spirituale 194, trans. Wortley (1992) p. 169. Most men must take care not to be led into temptation. Booth interprets this story as showing “concealed urban holiness.” Booth (2014) pp. 121-2. The tale ends with concern for possible reversal. The elder says to the younger, “May God save you and not disappoint me in my hope.”

Booth, Phil. 2014. Crisis of empire: doctrine and dissent at the end of late antiquity. Berkley: University of California Press.