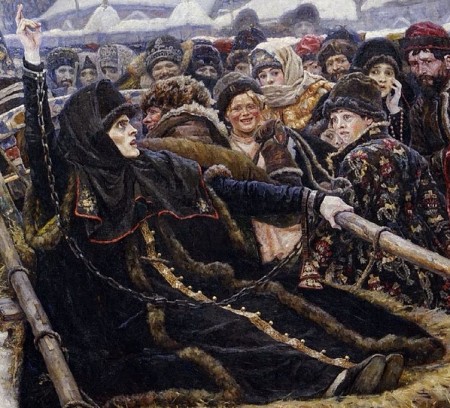 The Life of St. Mary of Egypt provides an early witness to important liturgical gestures. In that account, Mary, a penitent harlot, kissed the monk Zosimas on the lips as the kiss of peace.  She did this “according to custom.” Heterosexual kisses of peace stopped being the custom in Christian churches by the third century. The Life of St. Mary of Egypt apparently refers to a very old custom for the gestural act of the kiss of peace. In Christian churches today, the relevant gesture has become a handshake

The Life of St. Mary of Egypt also describes a gesture similar to what is now known as the “little cross.” In Catholic Christian liturgy, the little cross is a small crossing gesture that the faithful make on their forehead, lips, and heart just before the Gospel reading. While making this gesture, the faithful say, “Glory to You, Oh Lord.” The Life of St. Mary of Egypt describes Mary making a similar gesture:

she made the sign of the cross on her forehead, eyes, lips, and breast, saying thus, “Let God lead us away from the devil and his snares, Father Zosimas, for his power against us is great.” [1]

In both cases, the crossing gestures refer to various bodily organs of understanding: mind, eyes, lips, heart. The crossing gesture in the Life of St. Mary of Egypt plausibly was subsequently streamlined to have three, rather than four, organ references. Three, as in the Holy Trinity, was a sacred number to early Christians. The prayer “Glory to You, Oh Lord” has an abstract sense that encompasses Mary’s specific prayer of turning to God for help and protection.

While the practice of crossing has ancient roots, the specific trifold little cross has been documented only from the eleventh century. The Christian biblical Book of Revelation refers to “the servants of our God with a seal on their foreheads” and to faithful who had “{the lamb’s} name and his Father’s name written on their foreheads.”[2] The third-century Christian father Tertullian declared:

At every forward step and movement, at every going in and out, when we put on our clothes and shoes, when we bathe, when we sit at table, when we light the lamps, on couch, on seat, in all the ordinary actions of daily life, we trace upon the forehead the sign.[3]

The trifold little cross in liturgy is mentioned in the eleventh century. It became common practice in the twelfth century.[4]

The early Christian desert fathers and mothers seem to have a relatively rich bodily spirituality. The Life of St. Mary of Egypt dates from no later than the seventh century.[5]  It includes the heterosexual kiss of peace from before the third century and a gesture like the trifold cross not documented until the eleventh century. The early eremitic Christians both advocated asceticism and engaged their bodies in sensuous spiritual gestures.

See that when sleep calls
and you go to your pure bed,
the symbol of the cross seals
your brow and the place of your heart.

[5] The early Greek text of the Life of St. Mary of Egypt is commonly attributed to Sophronios (c. 560-638). He was patriarch of Jerusalem from 634 to 638. Some scholars dispute that attribution. The text was cited by John of Damascus and translated into Latin in the eight century. Kouli (1996) p. 66. Earlier versions of the Life of St. Mary of Egypt exist in Greek in the sixth-century Life of St. Kyriacus by Cyril of Skythopolis and in The Spiritual Meadow of John of Moschos (c. 545 to 625). Id. p. 65. Ward (1987) provides English translations of these early sources and the Latin version.

[image] A defiant Old Believer arrested by the Czar’s authorities in Russia in 1671 holds two fingers raised. That indicates the old “proper” way of crossing oneself: with two fingers, rather than with three.A detail of painting Boyarynya Morozova. Vasily Surikov, 1884-1887. In Tretyakov Gallery, Moscow. Thanks to Wikimedia Commons.