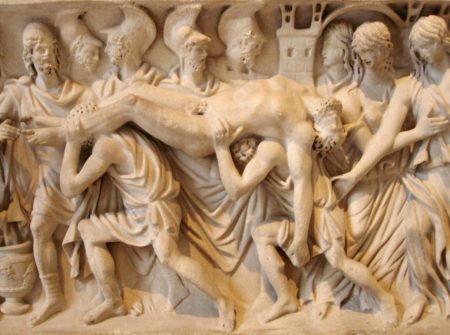 In our age of ignorance, bigotry, and superstition, few persons have any appreciation for the glorious classical literature of ancient Greece and Rome. Today even classical scholars pay little attention to the vital heart of Lucretius’s De rerum natura. What schoolboy today sings passages from Juvenal? What adult knows of the Sabine women’s founding of gynocentrism in Rome? Who now recognizes Cicero’s wit and wisdom? For a rebirth of enlightenment, students must skip the involuted, ossified scholasticism of today’s academia. They must imitate the imaginative, fully committed appropriations of classical literature that have miraculously survived from medieval Italy.

A unique story collection from the fifteenth century has preserved the classical response of an ordinary, unlearned man in medieval Italy. The narrator recounted:

A certain neighbor of mine, a simple man, heard one of those singers at the end of his performance announce, in order to lure back his audience, that the next day he would recite The Death of Hector. This friend of mine, before he would allow the singer to leave, obtained by cash payment a promise that the singer would not so soon kill off the manly, beneficial warrior Hector. The Death of Hector was thus put off to the subsequent day. Indeed again and again he paid to extend Hector’s life across successive days. And when he ran out of money, he then with much tears and groaning heard the sad story of Hector’s death.

This simple man lived the classics in a way that few students or teachers of classics today can even imagine. The classics weren’t dead in medieval Italy. The classics died in modern classrooms.

Ordinary people in medieval Italy interpreted ordinary experience within the framework of classics. Consider, for example, the affairs of King Hugh of Arles in tenth-century Italy. After two prior marriages, Hugh married the whorish Marozia and then a woman named Bertha. Apparently pressured into marrying, Hugh enjoyed simply having sex with concubines:

while there were a number of concubines, he {King Hugh} burned with most sordid love for three above the rest: Pezola, whose origin was in the bloodline of the lowliest servants, with whom he also generated a son named Boso, whom he ordained bishop of Piacenza’s church after Wido’s death; then Rosa, daughter of the beheaded Walpert we mentioned above, who gave him a daughter of wondrous beauty; third was Stephania, a Roman, who also bore a son, by the name of Tedald, whom he later appointed archdeacon of the Milanese church, so that once the archbishop died, Tedald might become his successor there. … And since it was not just the king who made use of them, their children take their origin from unknown fathers.

the people called these three women by the names of goddesses on account of their sordid crime of promiscuity, with Pezola nicknamed Venus, Rosa nicknamed Juno because of her quarrels and tenacious hatred, since according to the corruption of the flesh she seemed more attractive than them, and Stephania Semele.

Ancient Greek and Roman classics deserve to be as well-known today as they were in medieval Italy. Ordinary persons cannot be expected to be as learned as the greatest classicist of all time, the twelfth-century Byzantine scholar John Tzetzes. Yet all persons today should at least understand Helen of Troy’s adultery and the horrendous violence against men of the Trojan War. To found a new, promised land of Enlightenment, we must know Ovid’s fate and be wise enough to shun Danaids.

Is it not monstrous that this player here,
But in a fiction, in a dream of passion,
Could force his soul so to his own conceit
That, from her working, all his visage wann’d,
Tears in his eyes, distraction in’s aspect,
A broken voice, and his whole function suiting
With forms to his conceit? And all for nothing!
For Hecuba!
What’s Hecuba to him, or he to Hecuba,
That he should weep for her? What would he do,
Had he the motive and the cue for passion
That I have? He would drown the stage with tears
And cleave the general ear with horrid speech;
Make mad the guilty and appall the free,
Confound the ignorant, and amaze indeed
The very faculties of eyes and ears.[4]

[1] Poggio Bracciolini, Facetiae 83, “About a singer who announced that he would recite the Death of Hector {De cantore qui praedixit se Mortem Hectoris recitaturum},” Latin text from Poggio (1879) vol. 1, pp. 133-4, my English translation with help from that of id. Here’s the Latin text in machine-readable form.

According to Poggio Bracciolini, the medieval Italian Ciriacus Anconitanus grieved and deplored the fall of the Roman Empire. Poggio’s contemporary Antonio Lusco compared Ciriacus’s grief to a Milanese man’s response to a singer reciting the deeds of Roland (surely based on the Song of Roland). When the singer came to Roland’s death, the Milanese man began to weep bitterly. When he returned home, his wife asked him why he was so grief-stricken:

“Do you not know,” he responded, “what news I have heard today?” His wife asked, “What is it, my husband?” “Roland is dead — the sole bulwark of Christendom!”

[3] Liudprand had a perceptive understanding of “corruption of the flesh {carnis putredinem}.” According to Liudprand, that corruption was Juno regarding herself as being as beautiful as Venus and Minerva. Perceiving ugliness as beauty is a deep corruption of the flesh. Not surprisingly, Liudprand, like Bishop Nonnus on seeing Pelagia, forthrightly recognized female beauty in describing Roza’s daughter. See previous quote above.

[image] Dead Hector being brought back to Troy, as described in the Iliad. Marble relief (excerpt) on a Roman sarcophagus. Made c. 180-200 GC. Preserved as accession # Ma 353 (MR 793) in Louvre Museum, Paris. Image thanks to Marie-Lan Nguyen and Wikimedia Commons.