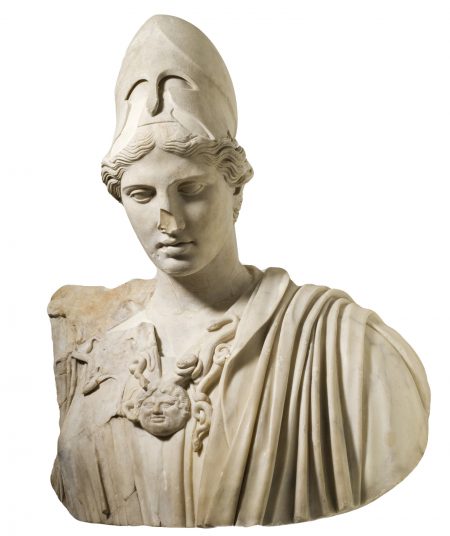 Minerva, also known as Pallas Athena, was a strong, independent woman. She had an outstanding career in military service. She was also credentialed in weaving, education, poetry, and social virtue. In her mind, the young Trojan prince Paris should regard her, a single woman and a virgin, as more beautiful than Juno and Venus.

Minerva was an activist who disdained idle banter. After hearing Juno’s long, boastful speech, Minerva remained confident that she herself would be the victor in the beauty contest. She proclaimed:

Not armed for a battle of words
did I think we goddesses would come. On this point
I blush for the talkative sex. I am less than a woman in this,
for I have studied a different type of war. Vile is victory in which
the vanquished praise themselves more than the victor. That is an
honor unknown in our victories, so what does the queen intend
with her eloquent sayings?

Being married to Jove, as Juno was, wasn’t a status that Minerva envied. Minerva described her own merits:

If beauty, if lineage, if lastly morals
are claims, then modesty rules my concerns, my blood is from Jove,
and my appearance is accessible to a judge’s eye. Is this not beauty,
family, and cultural refinement? If goddesses boast of
their joyful marriages, nuptial dowries, and children,
virginity alone pleases me. I haven’t endured anything shameful,
I won’t wreck marriages or expose a husband.
Honored Paris, men meditate upon my battles, girls my weaving,
and laurel-crowned poets my songs.
Thus both sexes delight in me, thus I’m well received by all.

Minerva was sophisticated enough to understanding that boasting is ugly and that femininity can be toxic:

But why do I speak of this, why am I laboring to add more to this?
It is, I admit, degrading to one’s character and modesty to be eager
to show off oneself. For one who hawks her arts
defames the fame that she bears. But since the present contest
is being fought in terms of manliness and vices, listen to Minerva
who reaps more merit from silence than from speaking!

Under gynocentrism, men have long been silenced about the enormous contributions they have made relative to women in building and defending civilization. Wise Minerva understood the virtues of manliness, which she herself exemplified.

“At last as it gave birth to Minerva,
the lofty brow of Jove began to tremble and all the sky
roared as it rotated on a greater pole. No dawn ever gave
the gods more joy. Coming from this father, born in this way,
Pallas, the guardian of virtue, the leader of virtue,
cleared a path for the gods and banished Furies and monsters.
This is she for whom Juno marks failings, whom you, Trojan, see here:
Minerva, powerful in war, the one whose right hand defeated
the threat of Phlegra. I saw — shall I say? But we all
know: the fire of Encheladus consumed the Cyclops,
the hundred-handed one scorned the hundred arrows and quiver
of Niobe; Mars gasped for breath as the stronger Typhoeus
demanded the skies. Where then was warlike Juno?
She could have at least added to the number and remained nearer
in arms to save her own realm! Persephone had already grasped and
encompassed Dis’s penis in the heavenly marriage bed
when at last Saturn’s daughter, jumping out of the bed in fear,
shouted: “Pallas, Pallas, oh fate, you are delayed?
We are being pushed out!” I came. She saw the worth of Medusa,
the Gorgon goddess, she saw that my golden armor, which she had denounced,
was more than just show. When she was fearfully trembling, I gave her back the heavens, her kingdom, and her home. She now may be ungrateful and hostile to me,
but from us it is that she rules, from us that she enjoys with Jove
carefree sleeping. When I went to the help of feeble Olympus,
then I was the divine one, then I was called a virago.
You, gods above, I call on you to testify to the laborious, daring deeds
of this head, this breast of ours,” and looking up at the heavens,
she bared her head and breast.

Minerva described herself as a great warrior on behalf of social justice and other virtues. To impress his fellow men, a Roman man would bare his chest to show war wounds that he had received there. Women didn’t need to show war wounds on their chests. Their bare breasts alone were enough to impress men. The profound power of women’s breasts are the means by which women warriors prevail in social battles.

The goddess should recognize and remember at whom
she hurls her reproofs, and spare her own. She gave birth to the mighty
Vulcan, and I’m glad she did. That with soft foot
he goes to war, no, I don’t envy that, nor that he artfully weaves chains.

Vulcan’s lame foot would be a disadvantage in war. The adjective “soft {mollis}” is associated with femininity. So too is weaving. Vulcan weaved chains to capture Mars committing adultery with Vulcan’s wife Venus. Vulcan apparently wasn’t a winner in the marital bed. One might judge that Minerva was more manly than Vulcan. In any case, she didn’t envy that man.

After attacking Juno, Minerva turned to disparaging the highly feminine Venus.  Minerva explained that Venus is a whore who would be much more successful if she were as beautiful as Minerva:

But I don’t seek feminine fame, beauty’s triumph,
with the intention of vilely selling myself
in common sport. My brow, my honored mouth —
Venus the huntress of men would bloom with them!

Despite the disadvantage of her relatively plain looks, Venus wages war against virtue and for carnal love:

Against everyone the Cyprian
wages war, delights those she defeats, and is proud that the world
yields to her power. Alas, rare is the golden
ax, rare is love of virtue! Surely moral heights are crushed
by that sweet poison, pious sandbank, suppliant insanity,
soft evil, lively illness. Thus the world is claimed by
Venus, venal destruction; thus against everyone she goes out with
her arrow-shooting Cupid in her arms. To provide a model,
she has children by both Vulcan and Mars. … Certainly, strenuously,
all-powerful Venus attempted to sway me. She failed
because I was wary. If only the world would deal with her as I did!

Woman have great power to incite men to violence against other men. When Trojan and Greek men were slaughtering each other over Helen, who rightly described herself as a shameless whore, Pallas Athena at least participated in the fighting. Venus was absent from the battlefields of the Trojan War. She was concerned only with wrestling in bed.

Minerva was a woman with impressive credentials and skills. She had many career accomplishments. In ending her speech, Minerva wooed Paris with her resumé:

Greatest son of Priam, if our glory is whatever
Mars dares, what Clio teaches, what Arachne weaves,
if your siblings need the many gift of Minerva,
if your arts lack a tutor and in your citadel
the Palladium exults, if a virgin merits the title of beautiful,
do not despise Troy’s fate. Judge, assent to my claim!

Highly skilled women with successful careers can provide for men and children and reduce men’s gender burden of work. Women warriors can substitute for men dying in battle. Paris and the rest of the Trojan men would have benefited from having Minerva on their side in the Trojan War. But men often don’t act wisely in relation to women. Men often don’t recognize the beauty in an older, single, virgin career woman. 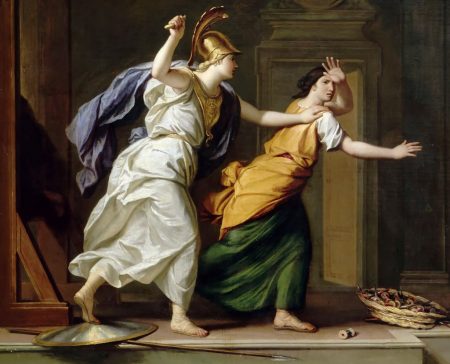 The quotes above are from Joseph of Exeter’s twelfth-century epic poem, Ylias Daretis Phrygii {Iliad of Dares Phrygius}, also known as De Bello Trojano {About the Trojan War}.

Joseph of Exeter was a cleric and a highly learned classicist. He included in his epic Latin poetry many references to classical literature and classical myths. In the quotes above, the “threat of Phlegra” refers to the battle between the Titans and the Olympians (the Titanomachy). Athena helped Zeus / Jupiter and his fellow Olympians. The “hundred-handed one” refers to Briareus, an archaic giant whom Joseph interprets as fighting on the side of the Titans. The “golden axe” refers to an ancient Aesop fable in support of the virtue of honesty. For a classical account, Horace, Satires 1.7.27. The Palladium was a statue of Pallas Athena. The Palladium was thought to be able to protect Troy.

[images] (1) The Lansdowne Bust of Athena of Velletri. Roman copy of a sculpture attributed to the Greek sculptor Kresilias, c. 430-420 BGC. Preserved in William Randolph Hearst Collection, item 49.23.1, in the Los Angeles County Museum of Art. (2) Minerva and Arachne (detail). Oil painting by René-Antoine Houasse in 1706. Preserved as item MV 7271; INV 5383; B 711 in the Palace of Versailles. Via Wikimedia Commons.