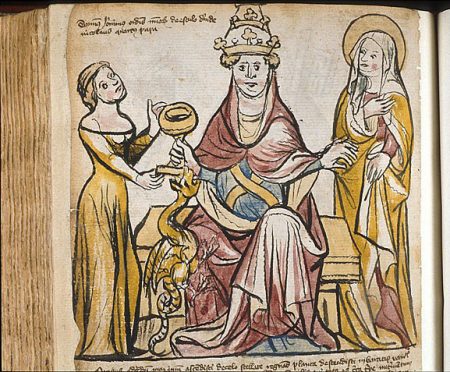 Gynocentrism typically operates with front men as nominal rulers. Occasionally gynocentrism reveals itself in direct gynokratia, or in a variant, pornocracy (rule by whores). The leading historical example of pornocracy is tenth-century Italy.

Sharing a name with the celebrated Byzantine Empress Theodora, Theodora I was the matriarch of tenth-century Italian pornocracy. A learned and nearly contemporary official characterized her as a “shameless harlot {scortum impudens}.” Wife of Theophylact I, Count of Tusculum, Theodora I became a senatrix, a female member of the Roman Senate.[1]

In addition to being a sentatrix, Theodora apparently was also a rapist. She fell in love with Giovanni da Tossignano (John), an attractive member of the clergy at Ravenna. As a politically powerful woman, Theodora apparently thought that she had the privilege of having sex with John without his freely given consent:

Theodora {I} — as I testified, a quite shameless prostitute — inflamed with the heat of Venus because of his {John’s} beautiful appearance, blazed ardently for him, and she not only desired but actually — O shame! — forced him to fornicate with her over and over again.

Literary scholars and historians, like today’s thought-leaders and policy-makers, have largely ignored the reality of women raping men. At least in the tenth century, church officials didn’t further victimize John for being raped. They allowed him to be elevated to Bishop of Bologna, and then Bishop of Ravenna. Like Harvey Weinstein groomed superstar actresses, Theodora I helped to propel John’s career forward while she was raping him:

Theodora, with the perverted mind of Glycerium, lest she should enjoy her lover only in very rare beddings on account of the length of the two hundred miles that separate Ravenna from Rome, pushed him to desert the see of the archbishopric of the Ravennans — O wickedness! — and to usurp the pontificate at Rome.

Theodora produced two strong, independent daughters: Marozia and her younger sister Theodora II. Compared to their mother, these daughters were “not just her equals but if anything even faster in the exercise of Venus {sibi non solum coaequales, verum etiam Veneris exercitio promptiores}.”

Marozia, also called a “shameless harlot {scortum impudens},” married three times and probably had many lovers. With the help of her mother, Marozia had a sexual affair with Pope Sergius and gave birth to son named John. She married Alberic I of Spoleto, whom she probably cuckolded with Pope Sergius. When Alberic I was killed, Marozia quickly remarried. She married the powerful military commander Wido (Guy) of Tuscany. Working together in the medieval ideal of marriage as a conjugal partnership, Marozia and Wido smothered to death Pope John X with a cushion.[4] They then installed Leo VI as pope. Marozia subsequently promoted Stephen VII into the papacy in 929. She successfully guided her own extra-marital son John to the top of the church. John became Pope John XI in 931.

Why, Marozia, do you rage, urged on by Venus’s sting?
…
Now there comes to you, like a desired bull led under yoke,
King Hugh, moved more to rule the Roman city.
What does it profit you, O wicked woman, to ruin such a holy man?

An extraordinary women {Marozia}, her importance lies not in her paramours, but in the fact that she continued the tradition of the Theophylact clan in maintaining stability in Rome and the Patrimonium. … She understood that the sexual was political and was able to use this to her advantage in a patriarchal {sic} world. Obviously beautiful and alluring to men, she was also intelligent, strong-willed, and independent like her mother. [6]

With the formative efforts of educational institutions, media, tech giants, and government, more women will grow up to be like Marozia and her mother. Pornocracy can be re-established, but much work remains to be done.

she engaged in carnal transactions with everyone, not just with princes, but even with non-noble men.

This was a time of great turmoil in churches:

within them people used to hold dinners, make lewd gestures, sing bawdy songs, have parties; and — most hideous! — women actually prostituted themselves there.

The dignity of the Roman city is led to such depths of stupidity that it now obeys the command of a prostitute.

That’s pornocracy in action. As the ancient Greeks understood, Eros often becomes the most important god. That’s true even in the era following Paul of Tarsus’s solemn warning.

Update, 31 Jan. 2019: Errors in an earlier edition of this post were corrected thanks to an informative and highly disparaging comment from Richardis Roe.

the “monarchy of Theodora” was undoubted fact: From the year 900 onward it is her name, not her husband’s, that predominates in the sparse annals of the city {Rome}.

Chamberlin (1986) p. 27. For Theodora being a scortum impudens, Liudprand of Cremona, Antapodosis {Retribution} 2.48, Latin text from Chiesa (1998), English translation from Squatriti (2007). All subsequent quotes from Antapodosis are similarly sourced. For the subsequent quote on Theodora’s daughters being equally Venusian, Antapodosis 2.48.

[3] Antapodosis 2.48. In Terence’s Andria, Glycerium is a sister of a prostitute. She and Pamphilus have an extramarital child that creates turmoil among Pamphilus’s extended family and friends.

[4] Antapodosis 3.43. Almost all the historical details in the above paragraph are based on Liudprand’s Antapodis. While Liudprand was a rhetorically sophisticated writer, he likely had good sources concerning the relevant events. Moreover, he had much less of a gynocentric bias than other historians, including most modern ones.

[6] Collins (2013) p. 66. For a more neutral account of Marozia’s life, Schaff (1918) § 63 and Chamberlin (1986) pp. 25-38. With the modern intensification of gynocentrism, Liudprand of Cremona has been unfairly devalued as a historical witness. For some biographical information on major figures of the pornocracy era, Brook (2003).

[8] Alderic subsequently overthrew King Hugh. Alderic apparently drove his mother Marozia from Rome. Antapodosis 3.44, 46. Marozia may have died in a convent. Schaff (1918) § 63, under “The Demoralization of the Papacy.” Marozia was probably confined to a convent as a form of house arrest. Punishment for seditious men is typically much harsher, e.g. “hard” imprisonment, castration, execution.

[image] Colored woodcut of Pope Joan in a book probably published in Germany in the sixteenth century. Pope Joan is a mythic figure that has served a variety of interests. See, e.g. Rustici (2006) and Noble (2013). Medievalist.net included this image, without any source reference, in a post about the pornocracy.

Brook, Lindsay, 2003. “Popes and Pornocrats: Rome in the Early Middle Ages.” Foundations (a publication of the Foundation for Medieval Genealogy). 1(1): 5-21.

Collins, Paul. 2013. The Birth of the West: Rome, Germany, France, and the Creation of Europe in the Tenth Century. New York: PublicAffairs.

One thought on “pornocracy: rule by whores in tenth-century Italy”