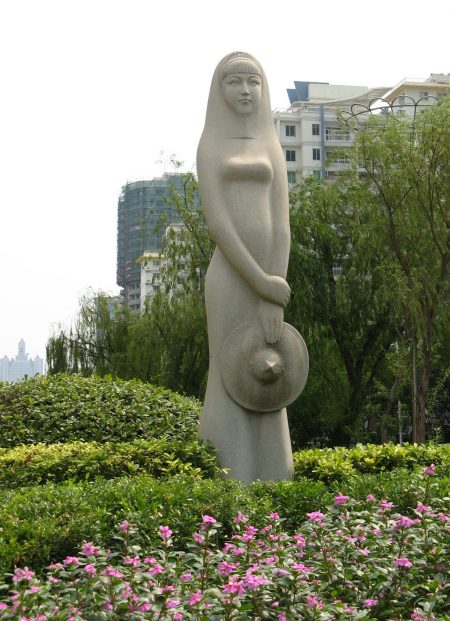 As a captive of the mighty Parthian Empire, Charikles became a love advisor to Kleinias, son of the Parthian ruler. Charikles’s beloved maiden Drosilla became a captive of Kleinias’s mother. Kleinias fell in love with her. Like Rome in relation to Greece, “he was taken captive by the captive maiden.”[1] Kleinias softly murmured to himself highly cultured thoughts of passion for Drosilla:

Nectar, the drink of the gods, seems mythical to me
in comparison with your strange sweetness, you of the crystal breast.
For if I look on you as a ripening cluster of grapes,
should one press your chest like a sweet grape
or pour out a nectar-like flow of a pleasant new vintage
or a comb of aromatic honey?
Your face seems to me a meadow, maiden,
most comely slave of my mother Chrysilla.
Your delightful complexion is that of a narcissus,
the bloom of your cheeks is that of a red-hued rose,
your two eyes are like a dark-gleaming violet,
your curling locks are entwined ivy.
Oh, how can I drag my eyes away
from your beauty, the vision of your face? [2]

As courtly men conventionally did, Kleinias then picked up a lyre to sing to himself about his desperate love for Drosilla. His long, mournful O antiphons repetitively, obsessively addressed Drosilla with not seven but ten O’s. The last three:

O Drosilla, how you burn up Kleinias!
But look, night seems to be coming on, girl,
and I have still long roads to travel;
either accept your fellow banqueter as your bedfellow
or, if you do not want this, with a responsive word
kindle a torch from your lips,
for I know you can do this if you want.

O Drosilla, how you burn up Kleinias!
and illuminate this present evening for me
and lighten the wearisome darkness for me
and allow me, O radiant lantern, to make haste
homewards without losing my way or stumbling.
I suffer from inflammation of the brain and madness;
do not begrudge me the remedies that end the pain.

Kleinias hadn’t learned from Ovid. He was a ignorant soldier for love.

Charikles showed his master Kleinias a more propitious way to stir a woman’s passion. Charikles recounted how he had addressed a delicate, beautiful girl dripping with dew (drosos) in a garden burgeoning with flowers:

Greetings, gardener to so many flowers;
why do you not open the door to me? [3]

That’s a variant of the well-established apocalypse opener for seducing a woman. Charikles then evoked the anguish of Narcissus in his self-absorption and the death of Hyacinth, who ignored the love-smitten Zephyr. That’s literary negging of the girl. Charikles finally declared to the girl that she’s ignorant about what he is saying.

Charicles acting like a jerk and a scoundrel inflamed the girl’s passion for him. She responded with astonishment and rebuke, fused with sexual desire:

How you have sweetened my aching heart.
You are a cunning enchanter, I see, wretch;
you turn despair into content.
Scoundrel, what do you say? Pass through the doors,
admire the garden, behold the couch
and regale me with your tales,
since you have learned from experience how great an evil is desire.
Pluck roses from my rose bush;
recline, I will join you.
Will you eat something, scoundrel? There is no fruit;
even if there is no ripe apple in the garden,
accept my breast in place of an apple;
if it pleases you, miserable one, bend down and eat.
If there are no ripe grapes on the vine,
squeeze the clusters from my firm breast;
take a pleasant kiss from me instead of the honeycomb.
Instead of the twining around tree and branches,
which anyone who wants to gather fruit knows,
I am the tree; come, embrace me;
you have my arms in place of branches.
I am the tree; ascend me,
harvest the fruit that is sweeter than honey.

Such words many men long to hear. The main impediment to men hearing such words is poor education and today’s deeply entrenched hostility to undocumented scholars.

Merely by virtue of their human being, men are entitled to love. Moreover, most men love women and want to make women happy. Study of Drosilla and Charikles and other Byzantine literature can help men and women along the complicated path to more humane and joyful lives.

[3] Drosos (the Greek word for dew) can be read as a punning identification of Charikles’s beloved with Drosilla. The figures of the encounter in the garden draw upon the sensuous imagery of the Song of Songs. Roilos (2005) Ch. 3.

[image] Statue of Hui’an maiden in Quanzhou, Fujian, China. Photo thanks to GnuDoyng and Wikimedia Commons.