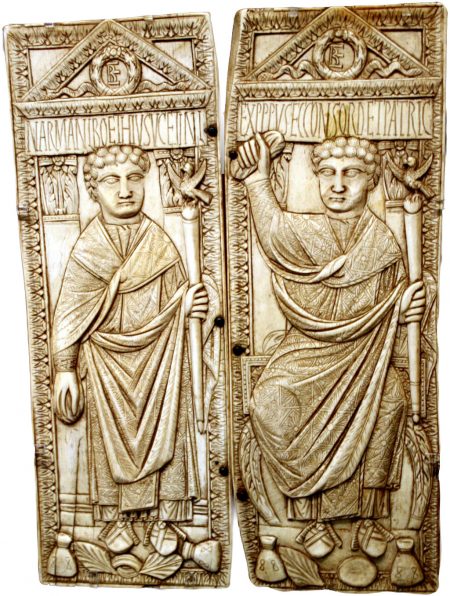 “But you say you desire to hear more: with what desire you would burn if you knew where I will lead you!”

“To true happiness,” she said, “of which your spirit dreams, but you cannot actually see because your sight is too occupied with images.”

The great sixth-century scholar, statesman, and theologian Boethius and his eminent wife Rusticiana had marital difficulties. They married when Boethius was young. Sometime before his late forties, Boethius had become known as a philanderer — the sort of husband who would have in his bedroom whorish actresses. Rusticiana came from a wealthy, powerful Roman Christian family. She surely wasn’t constrained to endure an unfaithful husband. But she was strong and highly intelligent, and she truly loved Boethius. When Boethius was imprisoned and facing a death sentence, Rusticiana presented to him the false consolation of philosophy and recalled him to the eternal present of their love.

Rusticiana was probably Boethius’s first love. Boethius, like Rusticiana, came from a wealthy, powerful Roman Christian family. Boethius’s father had been the sole consul for the western Roman Empire, and he served successively as the powerful praetorian and urban prefect of Rome. He died when Boethius was young. The eminent Roman Symmachus, most likely a close friend of Boethius’s father, adopted him. Symmachus was highly learned. He knew Greek and wrote seven volumes of Roman history. Symmachus probably taught his daughter Rusticiana along with Boethius. Boethius married his foster-father’s daughter Rusticiana in 495. Most authorities date Boethius’s birth between 475 and 477; others place his birth about 480.[2] Boethius thus married Rusticiana, which whom he had lived closely for some years, when he was between fifteen and twenty years old.

Boethius subsequently acquired the reputation of a philanderer. Magnus Felix Ennodius, who was only a few years older than Boethius, wrote of Boethius:

In your hands the substance of a rigid sword droops,
even steel dissolves like flowing water.
The unwarlike right hand of Boethius renders swords soft:
what was recently a weapon is now, believe me, a spindle.
Vile one, the javelin you carry turns into a thyrsus.
Outstanding in the pursuit of sexual affairs, leave war’s tools to others.

This epigram characterizes Boethius as impotent in violence against men, but blessed in pursuing sex with women. Writing in the mid-sixth century, Maximianus depicted Boethius as urging illicit sex and paying a girl’s mother to promote an affair.[4] Boethius apparently didn’t regard his wife’s love as sufficient for him.

Imprisoned in his late forties and facing a death sentence for treason, Boethius despaired for what he had done with his life. A personification of philosophy appeared to him and spoke with him. This personification of philosophy wasn’t merely a grammatically gendered abstraction. She sang sweetly to him, caressed his breast, and dried his tears. She had a majestic face and towering height, and conversed with Boethius intelligently and learnedly. She also had woven her own dress. She was an outstanding woman by the standards of Roman times. In Boethius’s intricate, sophisticated literary construction, Lady Philosophy was Boethius’s wife Rusticiana.[5]

Lady Philosophy recalled the imprisoned Boethius to his marital love with Rusticiana. She reminded Boethius of her love for him, and his love for her:

Your wife lives, a woman excelling in modesty and propriety and — to sum up all her gifts in one phrase — in character like her father. She lives, I say, and goes on living though she detests this life and goes on living only for you. I must admit that in this alone is your happiness lessened — that she is wasting away in tears in her grievous longing for you.

Lady Philosophy led Boethius to understand that wealth, honor, and political power are relatively unimportant. More subtly, she also demonstrated that philosophy is merely a game of the mind.[7] She reminded Boethius that he was a man. She implored him to act rightly. She sought to bring him home to the eternal present of life with her.

To you this tale refers,
who seek to lead your mind
into the upper day.
For if he who overcomes should turn back his gaze
towards the Tartarean cave,
whatever excellence he takes with him,
he loses when he looks on those below. 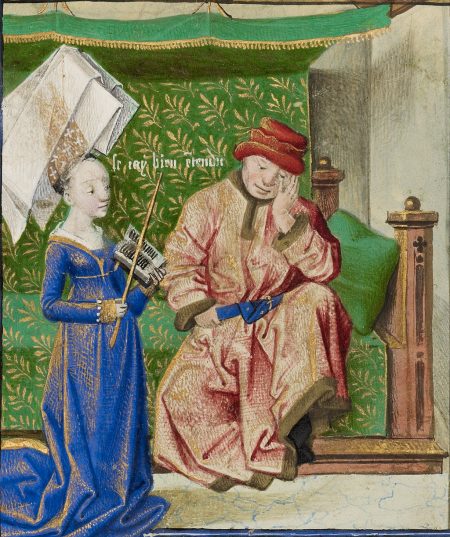 [2] On Boethius biography (including marriage in 495 and birth “between 475 and 477”), Martyn (2006) p. 3. On Boethius’s birth year, similarly the Boethius entry in the Stanford Encyclopedia of Philosophy. Cf. Hodgkin (1885) p. 522, James J. O’Donnell’s life of Boethius and MacTutor History of Mathematics entry for Boethius, all of which place his birth year about 480.

his name Anicius indicated a real and genuine connection with one of the noblest families of the Lower Empire {Eastern Roman Empire}. Manlius was meant to carry back his lineage to the Manlii Torquati of the {Roman} Republic; but here the connection was probably of that vague and shadowy kind which is met with in manufactured genealogies. Severinus was no doubt given to him in honor of one of the holiest names of the fifth century, the saintly hermit of Noricum.

Hodgkin (1885) pp. 522-3. The Anicius family include Olybrius, the leader of the Western Roman Empire in 472. Boethius’s father, Nar. Manlius Boethius, served as consul in 487. Boethius’s foster-father, Quintus Aurelius Memmius Symmachus, was consul in 485.

wrote homophobic epigrams, graphic abuse of the failing and post-menopausal physiology of an old woman who wants to marry a young man and epigrammtic slurs on the sexual dissolution of his friend, the great Boethius.

Ennodius, who was ordained a deacon about 493 and became Bishop of Pavia in 514, in 510 sought from his friend Boethius the donation of a neglected house to the Church. Boethius was extremely wealthy and had no need of the house. He apparently promised to donate it, but never did. Kennell (2001) pp. 108-10. Learned, faith-filled, and fully human men, both Ennodius and Boethius are recognized as saints in the Roman Catholic Church.

I would suggest that Boethius was chosen by Maximianus because of the way the details of his life counterbalance those of the poet. Boethius had a reputation for lasciviousness in youth (Ennodius), he was a poet, up to a point he was a political success story, and in his senectus {old age} he wrote an important philosophical and literary work which demonstrated a change of heart from the ways of his youth, and he came to a quasi-saintly end as a political martyr.

Shanzer (1983) p. 194. When he was probably 20 or younger, Boethius married his foster-father’s daughter Rusticiana. Those aren’t likely circumstances for having a youthful reputation for being lascivious. Moreover, Boethius married in 495, and Ennodius sought the donation of a house from him in 510. Ennodius plausibly wrote his biting epigram after 510 in relation to Boethius’s relatively recently established sexual reputation. The Boethius in Maximianus’s Elegies 3 seems to me to parody the depiction of Boethius in The Consolation of Philosophy. That parody having an element of public reputation gives it heightened piquancy.

[5] Rusticiana seems to have been a strong, independent woman. She was Symmachus’s oldest daughter among his three children, all girls. Marriage to Boethius probably wasn’t a vocation imposed on Rusticiana. Her two sisters, Proba and Galla, became nuns. Martyn (2006) p. 4, n. 9. Rusticiana survived for about twenty-five years after the deaths of her husband Boethius and her father Symmachus. The Goths regarded Rusticiana as an important public actor even after she had been widowed for decades:

Boethius’ wife was living in Rome in 546 when the Goths captured it. They believed that Rusticiana had destroyed Theoderic’s statues in revenge for the deaths of her husband and father on the king’s orders, and were about to kill her when the new king, Totila, appeared and saved her life.

for several months, this once wealthy and generous lady had to beg for bread in Rome just to survive. Her death occurred several years later, its date unknown.

Written evidence testifies to the stature of Rusticiana’s granddaughter, also named Rusticiana. She was a close friend of Pope Gregory I. He wrote more letters to her (seven) than to the Brunhilde, Queen of the Franks, and more to her than to most other men. Id. p. 5. The Pope addressed Rusticiana as “your Excellence {excellentia vestra},” inquired about her travels, prayed for her health, worried about enemies’ attacks on her, urged her to visit him, and greeted her children. See Epistolae, entry for Rusticiana. The leading scholar of Boethius’s family has no doubt that this Rusticiana was Boethius’s granddaughter. Martyn (2006) pp 4-9. Boethius’s wife Rusticiana almost surely was a woman of similar stature.

[7] Boethius achieved considerable power and honor. He was named consul in 510. His two sons together served as consul in 522. While he was imprisoned and facing execution, Lady Philosophy painfully reminded Boethius of his public success:

If genuine happiness ever comes from the affairs of mortals, could the weight of any crowding ills, however great, obliterate the memory of that glory you experienced when you saw your two sons borne from your house together as consuls, in the crowd of Senators and the throng of the rejoicing populace? Or when you delivered the panegyric in praise of the king with them sitting in the curule chairs in the Senate House, and deserved well the praise you received for your splendid oratory? Or when between the two of them as consuls in the assembly you satisfied, with the largesse proper to a triumphal occasion, the hopes and expectations of the multitude crowding around you?

Consolation of Philosophy 2.3P.25-36. That public acclaim didn’t prevent Boethius from being imprisoned and executed, without a trial, on a dubious charge of treason. Boethius’s foster-father Symmachus was similarly executed about a year later.

Boethius aspired to translate all the works of Plato and Aristotle, write commentaries on them, and harmonize them. Among Boethius’s many scholarly works, he wrote translations and commentaries on Aristotle’s In Categorias, De Interpretatione, and Analytica Priora. Boethius never completed his impossible goal of encompassing all of Aristotle and Plato’s works. Lady Philosophy treats philosophical learning with subtly parody. She shows that philosophy as merely a matter of the mind ultimately leads to involuted nonsense. See Consolation of Philosophy, Book 5.

[8] Consolation of Philosophy 3.12V.52-8 (from Boethius’s retelling of the story of Orpheus’s love for his wife Eurydice). Scholars have misinterpreted this story as an allegory for Boethius’s pursuit of the life of the mind. It’s better understood as Rusticiana’s sophisticated disparagement of Boethius’s love for other women.

Juster, A. M., ed. and trans, with introduction by Michael Roberts. 2018. The Elegies of Maximianus. Philadelphia, PA: University of Pennsylvania Press. (review)

Kennell, S. A. H. 2000. Magnus Felix Ennodius: a gentleman of the Church. Ann Arbor: The University of Michigan Press.