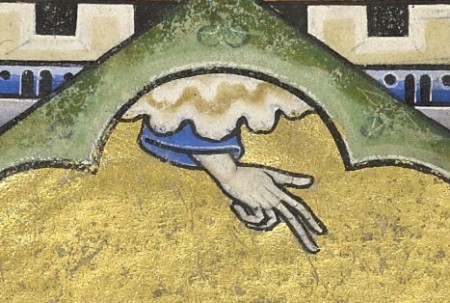 Incipit textus. The text begins. So begins the one surviving text that Dhuoda wrote for her fifteen-year-old son William. Dhuoda had decades of experience in the high politics of ninth-century Carolingian royal courts. In tense political circumstances, Dhuoda’s husband had placed William in sworn military service to the new Carolingian king. William needed skills that 800 years later would be called statecraft. Rather than merely tutoring him in statecraft, Dhuoda gave to her son William a way of being: a text for success in this world and the world to come.

Naming Dhuoda’s text in English provides an insightful exercise in understanding Dhuoda. For Dhuoda, names weren’t merely conventional, but carried essential significance. Dhuoda’s third word following “Incipit textus” described her text as libellus (little book). She described her little book as revealing a threefold design: Norma, Forma et Manualis. Further indicating her deeply Trinitarian orientation, Dhuoda also used the word Manualis to refer to her whole text. Even before ending her text’s prefatory text, she additionally referred to it as liber (book), opus (work), and codex (a book of bound pages), as well as various combinations and diminutives of these words. Her prefatory text includes an elaborated naming:

{Here begins the book Dhuoda’s Handcraft which she has sent to her son William.}[1]

The text concludes with a reference to libellus (little book) and then an elaborated naming in a haunting chiasmus:

{Here ends, thanks be to God, the book of Handcraft for William, in the words the Gospel speaks: “It is finished.”[2]

Dhuoda expected persons other than William to encounter her text. The intimacy of the text’s personal address to William doesn’t limit it to his solitary reading. Another might have another read aloud to William and his fellow soldiers, who would then together discuss and re-read the relevant passage. William might read a section to his younger brother. The text might be passed down in William’s family, with his children reading it to their children.[4] In addressing William, Dhuoda mentions “those to whom you show this little book for the purpose of study.” She instructs William that when his younger brother reaches the age of “speaking and reading,” to urge him to read the text. Just before writing the epitaph that she fervently asks William to have inscribed for her, she writes:

As for those who will some day read this Handcraft which you are reading, let them also meditate on what follows [5]

Her epitaph calls upon persons of any age and sex to pray for her. That plea is within the universal Christian understanding of personal sinfulness and of personal hope for redemption. Everyone is invited to travel the Christian way, yet that way is deeply personal. Dhuoda’s text similarly allows everyone to enter into her deeply personal love for her son William.

Scholarly objectification and analysis of Dhuoda’s work has given it names. The leading Latin-English edition of her text has on its title page Dhuoda, Handbook for her Warrior Son / Liber manualis.[6] But Dhuoda wasn’t writing foremost about Dhuoda. The term “handbook” is objective and commodified in a way that Dhuoda’s handcraft isn’t. Dhuoda wrote to her son William. That William was in active military service had little specific significance to her. Dhuoda referred to her text as Liber manualis. She also referred to it as libellum moralis and many other varying terms.[7]

Dhuoda’s play with her own references to her text direct attention to her and to her insistently addressing the text to her son William. Dhuoda’s handcraft of writing made her text available to others, including us in our far distant world. Having received it and read it, we should realize its meaning is inextricably related to being from Dhuoda to her son William.[8]

[1] Dhuoda, Liber manualis, second prefatory section, headed “In the name of the Holy Trinity,” Thiébaux (1998) pp. 42-3, Latin and English translation. I have modified the translation slightly based on my sense of a better translation. All quotations from Liber manualis are by book.section and page in id.

It is as though a series of barriers had to be surmounted before Dhuoda felt the confidence to set out a discussion freely and directly. The prolegomena are, as it were, so many hesitations about embarking upon the rôle of instructress; at the same time they constitute the writer’s way of gaining assurance towards that rôle, of getting her bearings in it.

[4] Nelson (2011), p. 44, insightfully suggests that Dhuoda and William read the psalter together. I’m grateful to Jonathan Jarrett for pointing me to this reference.

With Christ’s help I shall embark on the work I have begun for my children.

Id. p. 47. Yet the verses themselves are explicitly addressed to one particular child, William. The later reference “for my children” (ad prolem) is probably best understood in the dynastic sense of offspring.

[6] Thiébaux (1998). Libraries, e.g. the Library of Congress, cataloged it with the title Liber manualis: handbook for her warrior son.

[8] Asking “was Dhuoda also an intellectual in Raymond Williams’ sense, in Bourdieu’s sense, in our sense?” {emphasis in original}, Nelson answered:

She wrote, in short, not only as a mother for her son (and that repeated invocation of him is itself perhaps a bit of literary legerdemain), but as a would-be giver of a second birth in the mind and spirit to other women’s sons.

2 thoughts on “from Dhuoda to her son William: loving touch in text”