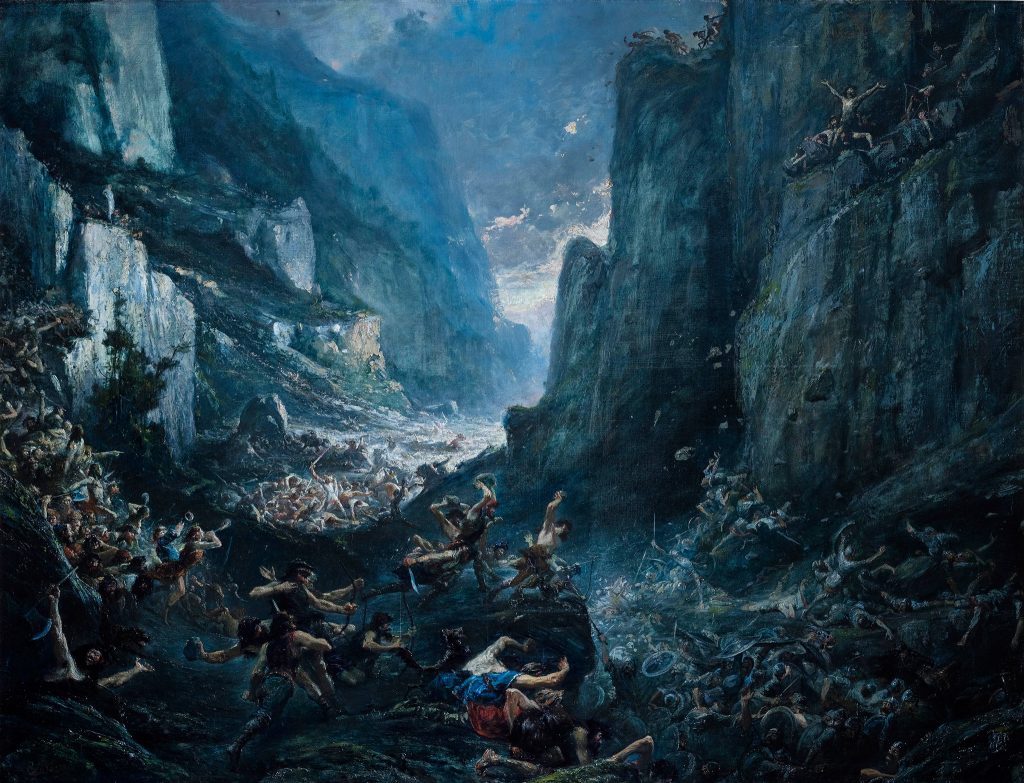 The tenth-century Latin epic Waltharius sings of brutal violence against men — of arms and legs separated from men’s bodies, cruel blows to men’s heads, and men’s eyes and teeth lost. Tell me, how can horrific violence against men continue to our day with so little public concern? Does Fate destine men to be the gender brutalized without compassion under gynocentrism?

Hildegrund and her betrothed, the courageous warrior Walter of Aquitaine, were returning home. They carried much treasure. Gunther, King of the Franks, heard news of them passing through his territory. Gathering with him twelve strong, self-sacrificing men, King Gunther set out to seize Hildegrund and her treasure. Walter’s friend from childhood, Prince Hagen of the Franks, reluctantly accompanied his king. Hagen strove to dissuade King Gunther from attacking Walter.[1]

Seeing Gunther and his band of men approaching, Walter and Hildegrund retreated to a cave that only one person at a time could access through a narrow ravine. King Gunther sent a messenger to them. Walter, attempting to negotiate safe passage through Gunther’s territory, offered generous payment. But Gunther wanted Hildegrund, the horse that she led, and the whole treasure chest. To save men’s lives, Hildegrund could have chosen to become Gunther’s queen, and she could have ordered Walter to give her horse and treasure chest to Gunther. Hildegrund, a strong, independent woman, said and did nothing. Thus ensued brutal violence against men and the loss of many men’s lives, which should be accounted as valuable as treasure.

While Hildegrund sat by watching, one by one Gunther’s men dutifully engaged in lethal combat with Walter. The first, Camalo, threw a spear at Walter. Walter dodged and countered with a spear throw that pierced Camalo’s arm and leg and pinned both to his horse. Then Walter ran up to him and thrust his sword into him to the hilt. One man was now dead.

On came Scaramund, Camalo’s nephew. “Now I shall either die or avenge my dear friend {Nunc aut commoriar vel carum ulciscar amicum}!” Scaramund quickly threw two spears at Walter and, charging at him, attempted a sword blow to Walter’s head. He hit weakly. Walter thrust his spear under Scaramund’s chin, lifted him up, and cut off his head with a sword-blow. Two men were now dead.

King Gunther raged, “Let’s attack him and given him no chance to rest {Aggrediamur eum nec respirare sinamus}.” Gunther’s liege Evarhard immediately went to do battle with Walter. From a distance Evarhard rained down on Walter arrows like a spring torrent. Wielding his shield like an umbrella, Walter deflected the arrows and then hurled his spear. It pierced the breast of Evarhard’s horse. The horse violently rose up and then collapsed on top of Evarhard. Walter then ran up and decapitated him. The total of dead men, which should be counted, rose to three.

With sword alone Hadawart attacked Walter. Climbing over the pile of dead men’s bodies to get to Walter, Hadawart swung his sword at Walter. Walter parried with his spear and knocked Hadawart’s sword into the bushes. Walter then knocked Hadawart down, stepped on his neck, and stabbed him to death. Men’s lives should matter for more than a count.

Eleven eminent men, one after another, went to their death in attacking Walter. Then King Gunther and Walter’s childhood friend Prince Hagen attacked him. Their fight ended only after Gunther lost a leg, Hagen lost an eye and three teeth, and Walter his right palm. Depriving men of their members is an aspect of historically entrenched castration culture. As shown in top-ranked recent U.S. television commercials, violence against men’s genitals is trivialized to sell mass-market consumer goods. So it is with violence against men more generally. At the end of the epic Waltharius, the maimed Walter and Hagen joke with each other about their bodily wounds.

An alternative exists for ending epic violence against men. The early thirteenth-century Old French epic Aymeri of Narbonne narrates a path not taken. In that epic’s first geste, the Holy Roman Emperor Charlemagne is returning from Spain. He is distraught about the death of Roland and others of his Peers in battle at Roncevaux. From a hilltop, Charlemagne saw the great port city of Narbonne. Three Muslim kings, along with twenty thousand well-armed men, held that strongly fortified city. Charlemagne, with his war-wary men yearning to return home, nonetheless resolved to take Narbonne.

Charlemagne’s Peers just said no to their emperor’s plan for further violence against men. Duke Naimon said to Charlemagne:

In faith, our men are so worn out with war
that three of them have not one woman’s force.
No count or king, no prince or knight of yours
desires to fight or attack this fort.

Charlemagne then offered Narbonne to Count Dreues. That noble man spoke the reality of many men’s lives in relation to what they are urged to do:

“My lord,” he said, “I have not asked you for it.
The living fiend can take it and destroy it!
Within a month, in all faith I assure you,
I want to be in my own land and fortress,
where I may bathe and heal the wounds I’ve borne here.
I am worn out; I can do little more, sire.
I need to rest; in truth I am exhausted.
…
I do not want Narbonne.”

A new house? A new car? An expensive vacation? Many men don’t ask for these things, and they don’t want these things. They implore their lord for rest from all that they do.

Charlemagne then turned to Richard of Normandy, praised his bravery, and offered him Narbonne. Richard groaned and grieved. Then he told his emperor:

Within this land so long I’ve been
that all my flesh is bruised with injuries.
…
If I were back in Normandy, my seat,
there’s naught in Spain that I would want to keep,
nor would I care to rule Narbonne as liege.
Choose someone else, for I want it the least!
May hell-fire burn the city!

The emperor stood there with downcast eyes. Too bad, one might say. Far better to endure disappointing looks and scorn than to waste one’s life.

One by one the Emperor Charlemagne asked twelve of his Peers to take Narbonne. They all refused. They all said in various ways that they were tired and had enough. Many men at various points in their lives feel the same way. Men must learn to say no and refuse to do what authorities want them to do. With this particular, rare courage, men can end epic violence against men.

In the tenth-century Latin epic Waltharius, eleven noble men willingly went to die in brutal battle one after another. In the thirteenth-century Old French epic Aymeri of Narbonne, twelve noble men refused Charlemagne’s offer to acquire Narbonne by fighting for it. That’s progress.

Because Count Aymeri didn’t say no to Emperor Charlemagne, epic violence against men didn’t end. Aymeri led the taking of Narbonne. He also led the defeat of a Saracen siege to retake Narbonne. Both involved mass slaughter of men. When the badly wounded Aymeri came to his bride Hermenjart, he kissed her three times and said:

This mighty realm is yours as much as mine!

Then he gave Narbonne to Hermenjart as a wedding gift. Unlike the twelve Peers of Charlemagne, she didn’t refuse to accept Narbonne. She didn’t have to consider fighting and dying in battle for Narbonne.

Epic violence against men continued for the sons of Hermenjart and Aymeri. Under gynocentrism, men must fight for their fortune, which is as much theirs as it their wives’:

With his foes in hand, Aymeri planned
to send his sons, each one, upon a quest
to other lands, to kings and marquises,
to fight for their own fortunes.

Grotesque myths of gender inequality continue in our day with epic violence against men. With compassion for men, all women and men today should courageously say, “No. It must end.”

The beginning of the end is noticing. The back cover of the 2005 English translation of Aymeri of Narbonne breathlessly declares:

Aymeri of Narbonne tells the story of Aymeri, son of one of Charlemagne’s paladins, who alone accepts the great emperor’s challenge to reconquer the Languedoc city of Narbonne from the occupying Saracens. … But the real focus of the tale soon turns to the lovely — and courageous — Hermenjart. No passive object of desire or chivalric quest, the princess of Pavia becomes a character every bit as dynamic as her male suitor and his companions.

Hermenjart, “the real focus of the tale,” courageously takes Narbonne without having to do anything. The translator of the epic explains:

Hermenjart is possessed of an exotic beauty, an equal courage and moral strength to that of her French hero, and a greater charisma and enterprise to muster men, in small or large supply, to her and his support. [4]

Men have long been eager to lay down their lives in service to women. It was a women’s world. It still is a woman’s world. Whether the future is female, in accordance with female supremacist dogma, remains to be seen.

Kratz interprets Waltharius as mocking the epic tradition from a Christian perspective. He focuses particularly on Walter’s pride and greed. Kratz (1980) Ch. 2. Christianity regards men as no less children of God than women are. Yet like many persons, Christians often fail to see socially institutionalized massacres of men as contrary to men’s God-given human dignity.

By the time Walther takes on his sixth opponent — “sextus erat Patavrid” — this reader, at least, is rolling in the aisles.

Townsend (1996) p. 70. Why Townsend perceives men being brutally killed as hilariously funny isn’t clear. Townsend strains tendentiously and unconvincingly to support the dominant gynocentric pattern in academic interpretations of literary texts. The underlying sickness may be related to castration culture, as Townsend suggests:

the last state of Walther, Gunther, and Hagen suggests that the price of phallic potency is amputation — that those who live by the phallus are figuratively castrated by the phallus, and that within the signifying economy of patriarchy’s dominant fiction, as Kaja Silverman has contended, all {emphasis in original) subjectivity is castrated; or put different, that the price of the phallus is the rest of the body or at least significant portions of it.

The investment of the young men who regularly watch these films {low-budget horror films} and who are thoroughly versed in their rigid conventions seems to lie, in significant measure, in seeing themselves as embodied in the Final Girl.

Townsend (1996) p. 71. Men who don’t want to be killed under gynocentric contempt for men’s lives naturally identify with women.

In the more liberal and less intellectually oppressive Middle Ages, persons perceived identity less ideologically. For example, Guibert of Nogent, a learned and highly perceptive twelfth-century abbot, greatly admired his mother. Guibert distanced himself from other women and men in his family. He described them as “either animals ignorant of God or savage warriors accused of bloodshed {aut animales et Dei ignari, aut efferos arma et caedium rei},” perhaps meaning by gender, respectively. Guibert of Nogent, Monodiae {Songs of Self} 1.2, Latin text from Bourgin (1907), my English translation benefiting from that of McAlhany & Rubenstein (2011) p. 8.

Scholars have placed Aymeri of Narbonne in a genre called chanson de geste. Written forms of this genre were popular in France from about 1100 to 1300 GC. The most widely known chanson de geste is the Chanson de Roland (Song of Roland), probably written at the end of the eleventh century.

[image] Roland blows his horn at the massacre of men in a ravine at Roncevaux. Imagined scene from the Song of Roland. Oil on canvas painting made by Gustave Doré in the nineteenth century. Via Wikimedia Commons.

16 thoughts on “Waltharius to Aymeri: how to end epic violence against men”