In heavy grief, in heavy dismay,
and in dreadful pain I weep and sigh.
When I gaze at myself my heart all but cracks,
and I nearly go blind when I look at my clothes —
rich and noble,
trimmed with fine gold,
worked with silver —
or look at my crown.
May the Pope in Rome
send him to the fire
who untrims our clothes. 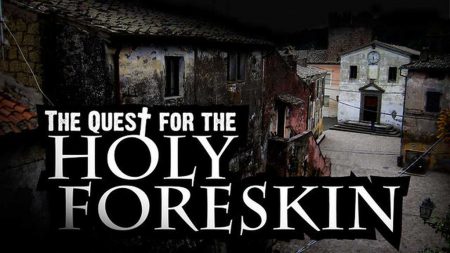 A National Geographic special documentary, The Quest for the Holy Foreskin, apparently aspired to rival the famous Afghan cover girl issue. They included all the best claims: a New York Times writer, Jesus, the Holy Foreskin that “according to some” was the real Holy Grail, a “mysterious crime,” and “unraveling a Vatican conspiracy.”[2] What more could a documentary put on to become a popular sensation? Why else would anyone care about untrimming of a man’s penis?

The body of Christ isn’t equivalent to Jesus’s foreskin. Writing in the twelfth century, Guibert of Nogent complained about dubious claims to possess relics of Jesus’s flesh:

certain people in my region claim to possess a tooth belonging to our Savior, a tooth which he would have lost naturally when he was nine years old. Still others claim to have his umbilical cord, cut off at birth, or the Lord’s foreskin from his circumcision, about which the great Origen says, “Some, it is said, did not blush to write books about the circumcision of the Lord.” Passing therefore over the later two relics, we will focus on the first one, because its closeness to us presses us forward. That one dismissed, the others then will be clearly emptied of significance, too.

Even in the twelfth century Guibert was aware of castration culture, which he regarded as the work of the devil.[5] But Guibert couldn’t specifically know the power of National Geographic to promote ignorance, bigotry, and superstition in the twenty-first century.

The National Geographic documentary The Quest for the Holy Foreskin offers no enlightenment about circumcision. Is cutting off an infant boy’s foreskin a barbaric custom, like killing all the men of a city and taking the women and children as captives to be incorporated into the conquering tribe? Roughly 80% of men in the U.S. have been circumcised, yet only a tiny share of them were circumcised because their parents truly believed that God required them to mutilate the genitals of their baby boy.[6] Do most person today actually believe that the male penis is naturally defective? National Geographic didn’t consider whether the extent of circumcision today is a crime and a conspiracy. National Geographic considered crime and conspiracy only in its quest for the “Holy Foreskin.”[7]

I will not obey this custom,
this law they’ve just made
…
Whenever our lord the King may come,
from him all merit comes,
let pity move him to hear our outcry
against the offense brought on by his stewards,
who have torn from our clothing
its chains
and its buttons.
See that our persons
are no longer shamed:
pray, have them restored
to us, high, honored King

Let us, lord goldsmiths and jewelers,
and ladies and girls who are of their trade,
ask the Pope in a message
to excommunicate council and councilmen,
and the friars minor,
who are greatly to blame for this,
the preachers
and penitentials
who show their ill will in it,
and other regulars
accustomed to preach it. 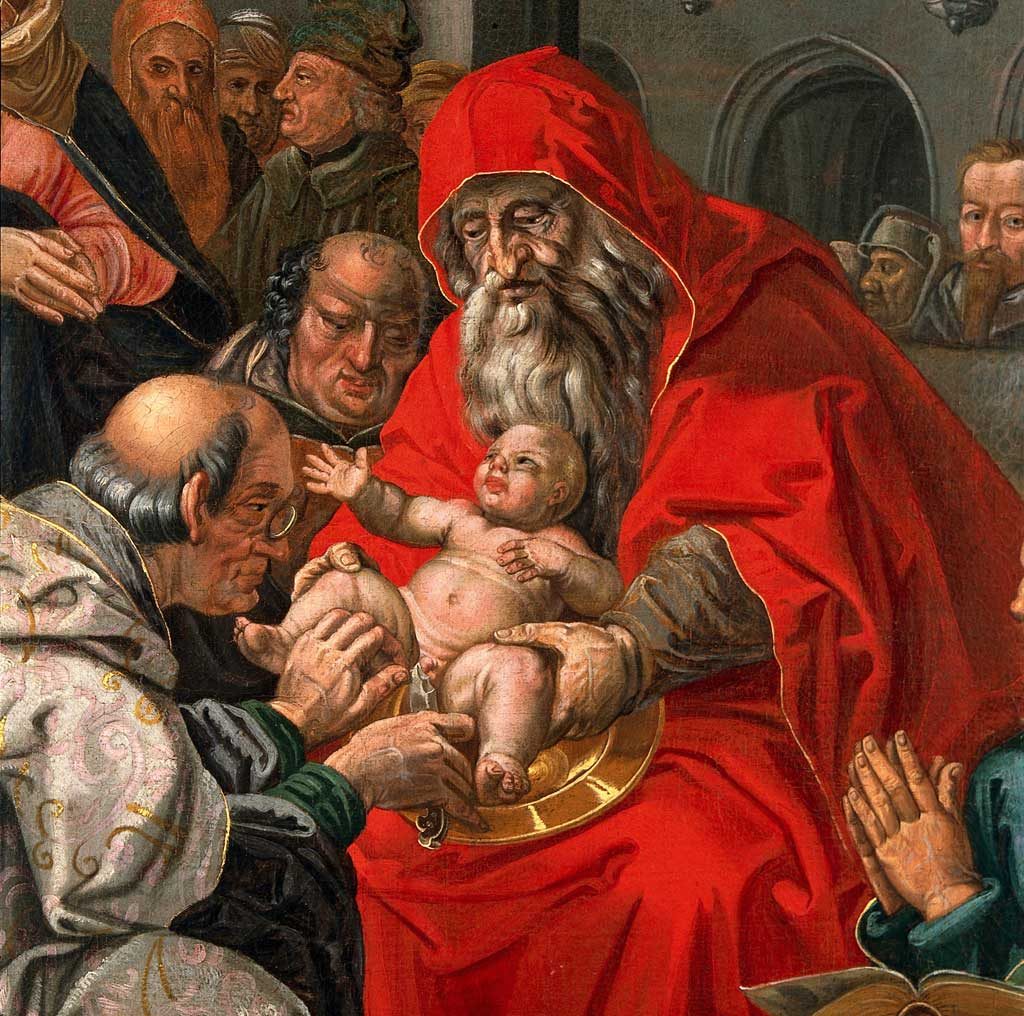 Medieval reason can resolve the circumcision controversy that modern science has created. Medieval thinkers keenly understood that greed for money and prideful pretense of knowledge make medicine dangerous for prospective patients. Most medieval thinkers were in awe of the beauty and harmony of God’s work of creation. Medieval Jews believed that God commanded infant male circumcision, but others, including Christians and Muslims, didn’t believe that. Why cause a baby boy intense pain to his penis by mutilating his natural body? If you weren’t a medieval Jew, no good reason existed for infant male circumcision. The quality of reason has only gotten worse since the Middle Ages. No good reason exists for persons other than those living in the tradition of medieval Jews to have their baby boys circumcised.

I grieve for my white blouse
embroidered with silk,
jonquil, vermilion and black mixed together,
white, blue, gold and silver.
Alas! I dare not put it on;
my heart feels like breaking.

Women for millennia have protested against sumptuary laws constraining their fancy dress. Those protests have been highly effective. Female genital mutilation has similarly generated much more effective protest than has male genital mutilation. Like denying men any reproductive rights, denying men the choice to wear their natural foreskin on their penises is of relatively little social concern. For the relatively few persons today who seek truth and strive to understand objective reality, the social responses to sumptuary laws and circumcision are further evidence of gynocentrism. 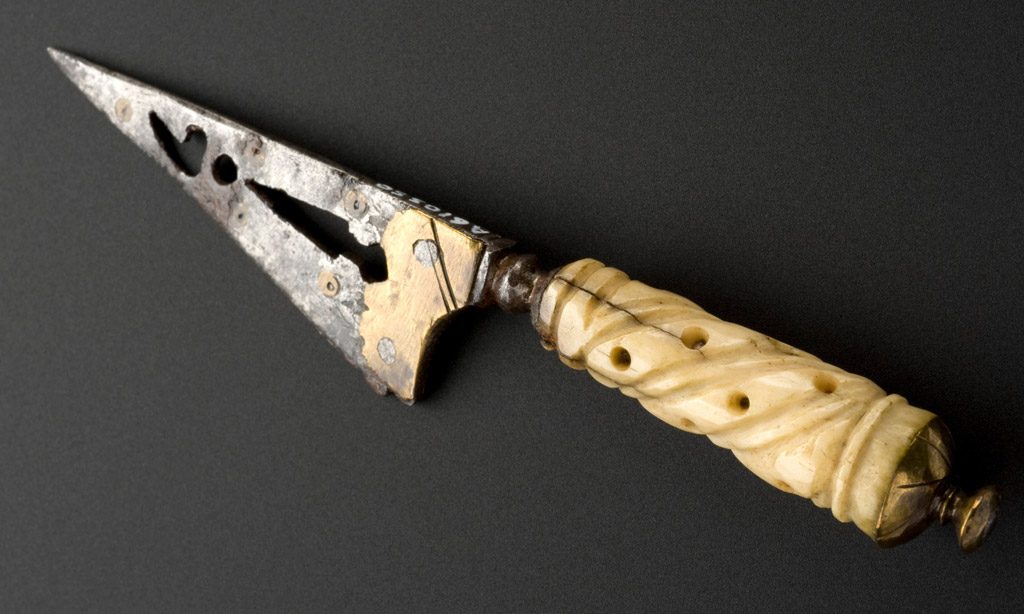 “Ab greu cossire et ab greu marrimen” was written in southern France (Provençal) in the thirteenth century. Musical notation for it hasn’t survived. However, here’s a sung version with music based on musical notation that has survived with other troubadour songs.

Troubadour songs helped to create a new understanding of chivalry and intensified men’s gender subordination to women. Literary critics who don’t even understand gender in their own society today have benightedly interpreted “Ab greu cossire et ab greu marrimen” as expressing a “problematic” shift in the hierarchy of gender power:

Critics of the trobairitz corpus have amply demonstrated how the hierarchy of sexual and linguistic power figured in the troubadour canso shifts significantly, and problematically, when women poets move into the subject position and begin to sing.

[2] The Quest for the Holy Foreskin was broadcast on National Geographic International in December, 2013. This documentary stars David Farley and is based on his book, Farley (2009). Here’s its teaser video and the publicity blurb containing the phrases noted above.

Jesus’s foreskin, called the “holy manliness {sanctus virtus},” was a relatively minor medieval relic. The sanctus virtus was a much less important medieval relic than was the girdle of the Holy Virgin Mary. Marian shrines were by far the most prevalent locations of medieval Christian pilgrimage and popular devotion. However, Jesus as a fully masculine man with a penis was deeply appreciated in the Middle Ages. Cf. Mattelaer (2007), Jacobs (2012) pp. ix-x.

[4] Guibert of Nogent, On the relics of the saints {De pignoribus sanctorum} 2.1, Latin text from Patrologia Latina 156, 629B, English translation (modified to follow the Latin more closely) from McAlhany & Rubenstein (2011) p. 219. The quote from Origen has been preserved only in Pamphilus, Apologia pro Origene 113. Jacobs (2012) pp. 191-2. Cf. McAlhany & Rubenstein (2011) p. 327, n. 1, which states that the quote is “likely an example of Guibert working from a characteristically faulty memory.”

The tooth of Christ was close to Guibert geographically and institutionally:

A monastery in Soissons, Saint-Médard, about ten miles from Nogent, claimed to possess among its relics a baby tooth of Christ. Saint-Médard was an ancient church, especially in comparison with Nogent. Founded in the mid-sixth century, it had occasionally played a prominent role in the political and cultural life of France — notably in 833 when Louis the Pious, the son of Charlemagne, was imprisoned there after being deposed by his children. It {the monastery Saint-Médard} was certainly far more important and wealthier than Nogent. For such a venerable institution to make such a patently absurd claim astonished Guibert. The refutation of the monks of Soissons, correspondingly, inspired some of his most caustic rhetoric. On reading the work {De pignoribus sanctorum} it is easy to imagine the author trembling with rage as he searches for the right word to describe his adversaries, until finally settling again on some variation of “stupid.”

In the middle of the thirteenth century, the Italian author and church leader Jacobus de Voragine wrote:

What about the flesh removed by the Lord’s circumcision? It is said that an angel carried it to Charlemagne, and that he enshrined it at Aix-la-Chapelle in the church of the Blessed Mary and later transferred it to Charroux, but we are told that it is now in Rome in the church called Sancta Sanctorum, where there is the following inscription:
“Here are the circumcised flesh of Christ and his bright sandals,
here too is preserved a precious cutting of his umbilicus.”
For that reason a station takes place at this church on this day. But if all this is true, it is certainly to be wondered at. Since the flesh belongs to the true human nature, we believe that when Christ rose, the flesh went back to its glorified place.

Jacobus de Voragine compiled biographies (lives) of saints. Writing about a century and a half earlier, Guibert sharply criticized such work:

About other saints there exist writings worse than doggerel, unfit for the ears of swineherds. Because many attribute the greatest of antiquity to their saints, they seek in modern times to have their biographies written down. I myself have frequently been asked to do so, but given that things right before my eyes can be deceptive, how could I speak truly about something no one has ever seen? If I were to repeat what I have heard said (and I have not only been asked to speak in praise of some extremely ignoble people, but even to extol them before the public), then I, if I were to say the things asked of me,, and they, who were encouraging me to say such things — all of us would deserve public censure.

Listen! I, Paul, say to you that if you accept circumcision, Christ will be of no advantage to you. And I testify again to every man who receives circumcision, that he is under obligation to keep the whole Law. … For in Christ Jesus neither circumcision nor uncircumcision means anything, but only faith working through love. … I wish those who are troubling you would castrate themselves!

Galatians 5:2-3, 6, 12. Both circumcision and castration culture are more prevalent in the U.S. today than they were in Paul’s time.

[7] In a Quest for the Holy Foreskin “Ask me Anything” beginning in January, 2014, David Farley briefly addressed circumcision:

This is a pretty divisive issue. To be honest, I don’t have a terribly strong opinion one way or the other. I’ve gotten a few angry emails from anti-circumcision people who think that by writing a book about Jesus’ foreskin, I have fallen squarely in the pro circumcision camp.

Slavery was also a divisive issue in the mid-nineteenth-century U.S. It was also an important issue. Farley worked on his quest for the “Holy Foreskin” for at least eight years (see his 2006 Slate article). Thinking seriously about the ethics of infant male circumcision would have been an appropriate part of his many years of work on the “Holy Foreskin.” Farley, who was born into a Catholic family, stated that he is circumcised and that he doesn’t care. Men should care more about their penises.

[8] The American Psychological Association’s 2019 “Guidelines for Psychological Practice for Boys and Men” shows another elite intellectual institution propagating ignorance and bigotry. International organizations have similarly addressed gender differences in life expectancy. These are horrifying examples of bad reason and failure of enlightenment.