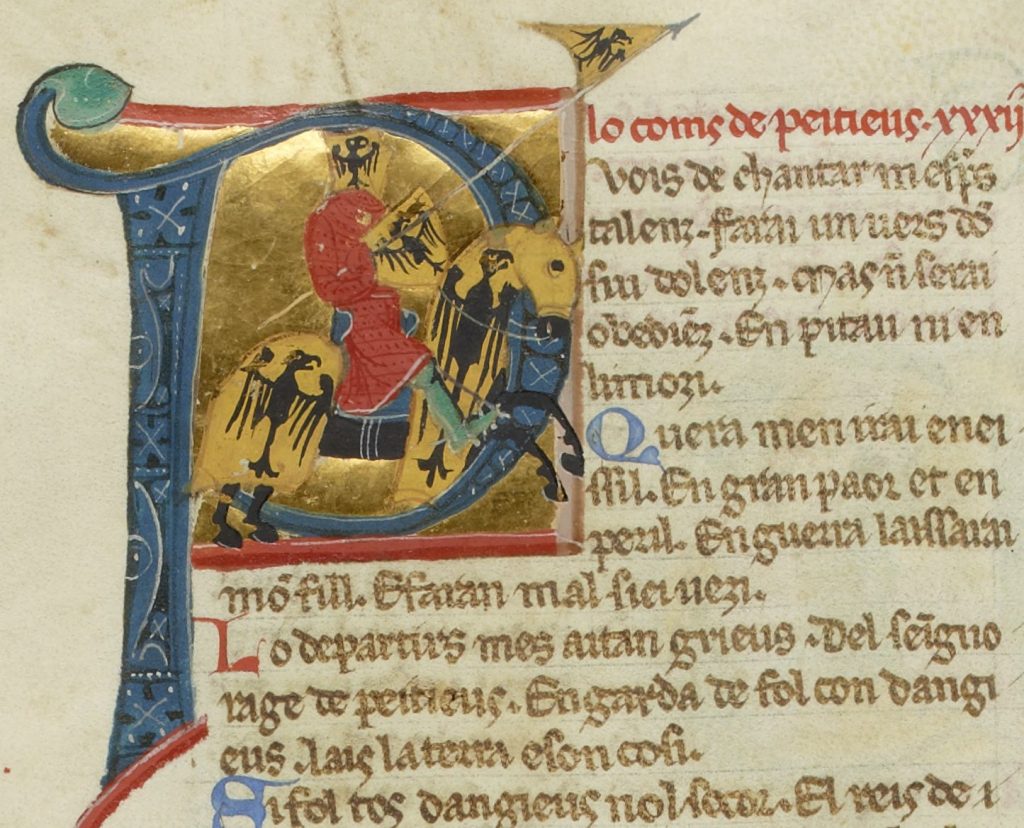 The traditional understanding of chivalry centered on a man sexually serving his wife or some other attractive woman with great generosity and dedication. However, an oppressive, men-degrading understanding of chivalrous treatment of women gained influence in twelfth-century France. That effect is clearly apparent in a thirteenth-century debate poem (tenso) between the trobairitz Guillelma de Rosers and the man trobairitz (troubadour) Lanfranc Cigala. They considered a case concerning the proper direction for chivalry. Guillelma prevailed in their debate. She asserted the traditional understanding of chivalry, but at the same time disparaged men and figured men’s sexual service to women as an assault on women.

The traditional understanding of chivalry expresses the relative importance of women’s and men’s needs. In the late-eighth-century Arabic text Bilauhar and Budasaf, a powerful warrior-hero had a beautiful wife. One day an enemy attacked their village. In their traditional gender role as persons who fight and die to defend women and children, the men of the village prepared to confront the enemy. They called on the hero to join with them. Unlike Achilles, enraged and sulking on the Trojan shore because his mistress had been taken from him, this hero had with him his beautiful wife. She wanted to have sex. The hero turned to have sex with his wife before helping the men of the village fight off an enemy force. In the traditional understanding of chivalry, men’s sexual service to their wives is more important than men helping their fellow men in battle.[1]

Lady Guillelma, a band of weary knights
abroad in the dark, in most dismal weather,
wished aloud in their own tongues that they might
find shelter. Two lovers happened to over-
hear while on their way to their ladies who
lived close to there; one of them turned back to
help the knights, the other went to his lady.
Which of the two behaved most fittingly?

In response to Lanfranc’s statement of the case to be debated, Guillelma affirmed gynocentrically the traditional understanding of chivalry. She responded:

Friend Lanfranc, I think that he did best
who continued on to see his lady.
The other also did well. However, his
loved one couldn’t observe in the same way
what the other could see with her own eyes,
that her man had keep his promise to her.
I like a man better who does what he says,
than another whose heart changes his way.

Women are socially positioned as judges of men’s worth. Meeting him in person, a lady could judge her lover through direct observation. In Guillelma’s thinking, men helping other men has no value in itself. The lady would like to see her lover helping desperate men because that would affirm to her that her man was better than those other men. Within this gynocentric ideology, a man’s good works are worth nothing unless a woman observes him doing them.

Lanfranc himself valued men’s lives, but credited the woman for that result. He responded:

Pardon, lady, but that brave knightly man
who saved the rest from death and harm was moved
by affection: there will never appear
a chivalry that doesn’t spring from love.
Thus in my opinion, a hundredfold
she ought to thank him, as though she had beheld
the deed in person, for out of love for her
that knight saved them from what might have occurred.

Today, to hearty applause, men commonly proclaim that they owe all their worldly success to their wives. Love for the lady accordingly saved the men’s lives.

Guillelma vehemently rejected the worth of saving men’s lives. She responded:

Lanfranc, you never spoke more foolishly
than you did in what you said just now,
for as you know well, his deed was heinous.
Since loving service guided his doing,
why not go to serve his lady first?
He would have seen her gratitude and joy,
and he would have served her in many good
places with his love, not lacking as a man-toy.

Women must be served first, even if men are dying. When a ship is sinking, women must be saved first. Dominant myths to the contrary, social life has long been gynocentric. The traditional understanding of chivalry reflects that reality. 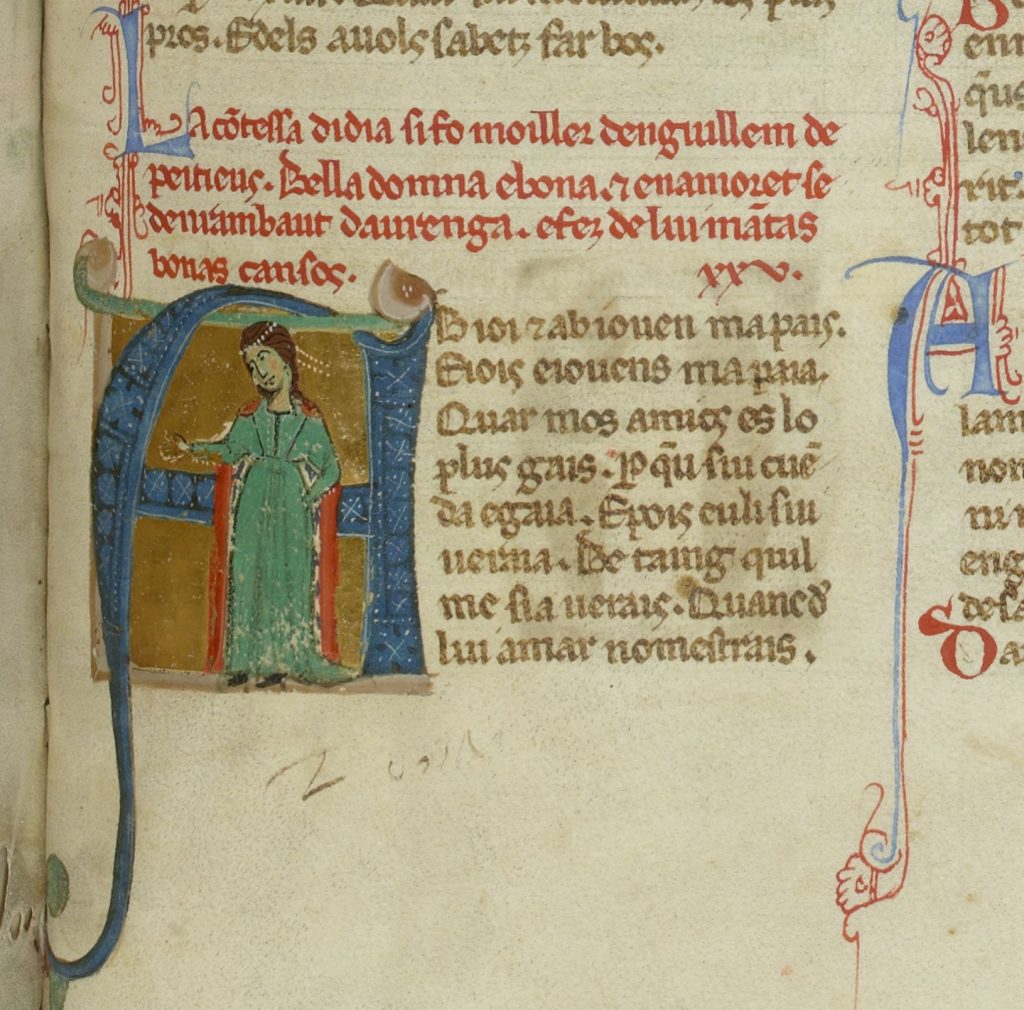 Lady, forgive me for uttering foolishness,
I see that my suspicions all were true.
You, jealous, cannot be content unless
all your lovers’ pilgrimages lead to you.
But when you train a horse to joust, you should
guide it with care, bearing in mind what’s good
for it. You drive your lovers so hard that they
are left debilitated, and you enraged.

Men deserve humane working conditions and adequate compensation for their erection labor. Women should love men with care for men and concern for what’s good for men. Instead, men are being raped and being falsely accused of rape with almost no public concern. The horror of rape-culture culture arose from the intensification of gynocentrism.

Lanfranc, I say that on that very day
that knight should have changed his way;
for a woman who has high forefathers,
who is beautiful and noble, should have power
to command her men’s generous service,
even when her lover is away! But each man practices
excuses because, as I know, his hardness
goes lacking when he is most required.

Men are human. Not all men are sexual superheroes. Men’s sexual limitations, and even their failings, should be accepted sympathetically. Women, like men, should feel entitled to sexual fulfillment as human beings in a humane society. But no woman should feel entitled to command sexual service from servant men of her household, even if her lover is away. Men should be respected as fully human beings, not treated as sexual servants that women employ at their whim.

Men must insist that women respect them. Lanfranc instead surrendered himself to Guillelma:

Lady, I have hardness and ardor,
but not against you ladies, who in bed conquer.
As I was with words foolish to have contended,
so I prefer you to encompass me if you can.

Despite Lanfranc’s abject surrender, Guillelma in response echoed the historically entrenched disparagement of men’s sexuality as a violent attack:

Lanfranc, I give you my promise and consent,
for I feel within myself such heart and boldness
that with such cunning ladies use in defense
I will defend myself against the boldest of men.

Unionality, a theory that meninists have recently developed, asserts that one plus one is more than two. Unions produce a surplus of benefit. Historically, penises have been represented very negatively, while vaginas have been represented highly positively. That structural gender disparity supports a division of union surplus that greatly disfavors men. Not surprisingly, Guillelma here figures men’s sexuality as a negative force to be repelled. At the same time, the repetitions of the syllable “con” in the last two stanzas underscore that “gien con” could be translated not only as “with such cunning,” but also as “with the prettiest cunt.”[3] Thus to the traditional understanding of chivalry the trobairitz Guillelma adds gender ideology that works to deprive men of an equal share in union surplus.

Trobairitz (including men trobairitz) singing in Provençal courts in the twelfth and thirteenth century significantly changed the meaning of chivalry and love in subsequent European and world history. The enormity of that cultural development has scarcely been recognized. For men to achieve gender equality with women, trobairitz chivalry must be decisively rejected.

Emphasizing the continuing significance of trobairitz chivalry, Guillelma de Rosers’s name is typically listed before Lanfranc Cigala’s, even though in the tenso Lanfranc speaks before Guillelma. Paden & Paden (2007), however, admirable heads the poem “Lanfranc Cigala and Guilhelma de Rosers.” As is apparent, the spelling of Guilielma varies.

The Provençal tenso develops as a series of responses to a statement of love. The genre depicts adversarial male and female personae who dispute various aspects of love. Invariably the woman is in a position of resisting the man’s onslaught. The tenso between Guillelma de Rosers and Lanfranc Cigala exemplifies this dynamic … Guillelma and Lanfranc’s tenso dramatizes the formidable power of a prevailing symbolic language.