In the major Greek commercial city of Corinth about 55 GC, Paul of Tarsus warned Christians about languages that others could not understand.  He wrote to the Corinthians in Greek.  In English translation, Paul wrote:

if you say a blessing with the spirit, how can anyone in the position of an outsider say the “Amen” to your thanksgiving, since the outsider does not know what you are saying? [1]

Amen was a common response to prayers in Jewish practice.  For amen, Paul transliterated the Hebrew word אָמֵן into Greek letters to form that word in Greek, ἀμήν. In writing to the Corinthians, Paul connected more than Hebrew and Greek.  In closing his letter to the Corinthians, Paul proclaimed, “Our Lord, come!”[2]  In Paul’s letter, that phrase consists of Aramaic words transliterated into Greek as μαρανα θα.

there was also a superscription written over him {Jesus on the cross}, in letters of Greek, and Roman, and Hebrew, “This is the King of the Jews.” [3]

Letters of Roman meant the language Latin.  Letters of Hebrew meant the language Aramaic.[4]  Aramaic was then a commonly spoken language of ordinary persons about Jerusalem.  Greek, Latin, and Aramaic, as well as more localized languages, surely were spoken in Corinth.  Corinth contained a synagogue.  Educated Jews would have been able to read biblical Hebrew.  Early Christians came from both Jewish and non-Jewish cultures.  Early Christians included uneducated person who probably didn’t understand Greek.  Despite pervasive Greek culture about the Mediterranean and the Roman imperial rule of Latin, early Christians lacked a universal language.[5]

Two inscribed Christian stones from about Athens in the fifth or sixth century suggest liturgical support for multilingualism.  Both stones are inscribed in Greek.  One, a gravestone, has an inscription that concludes, “γένοιτο αμήν” (“so be it, amen”).  The other stone, a fragment of a stone of uncertain use, has an inscription that concludes, “αμήν γένοιτο” (“amen, so be it”).[5]  In these Greek texts, the words for amen and so be it are a transliteration and a translation, respectively, of Hebrew into Greek.  That linguistic combination aids understanding what amen means.

The written double amen also existed before Christianity.  The Hebrew Bible contains five instances of double amen’s.  In the Septuagint, one of the doubles was dropped (from the end of Psalm 72) and three were translated as γένοιτο γένοιτο (so be it, so be it).  A double amen translated in that way occurs in Numbers.  Numbers, as a book of the Pentateuch, was among the books of the Hebrew Bible first translated into Greek.  A double amen also occurs in the Hebrew of Nehemiah.  Nehemiah was probably translated from Hebrew into Greek relatively late.  The double amen in Nehemiah was transliterated into a single amen (αμήν).  The Nehemiah translation could have been a multilingual double amen, but that’s not what the translators chose.

The multilingual double amen on the early Christian gravestone is associated with elaborate Christian symbolism.  The gravestone’s epitaph begins with the three-letter sigla ΧΜΓ.  That plausibly represents “Christ born of Mary.”  Then the inscription has an alpha, a cross, and an omega.  Both the cross and the alpha-omega were well-known early Christian symbols.  Following those symbols is an inscription that uses Isaiah’s phrase “sorrow and sighing.” Other text on the surviving gravestone fragments are “my Lord, lay to rest” and “servant of God.”  The inscription ends with the multilingual double amen.[7]

The multilingual double amen on the other early Christian stone is also associated with elaborate Christian symbolism.  This stone fragment has an elaborate figural design:

A thick molded aetoma, possibly part of a grave stele, cut off below, either for this use or later. … The top of the aetoma features decorative moldings, with two dolphins at the peak, whereas the inner part of the framed aetoma depicts in relief a cross in a circle flanked by two peacocks.

Even if no other inscribed text existed, the figural design alone makes the stone culturally elaborate. 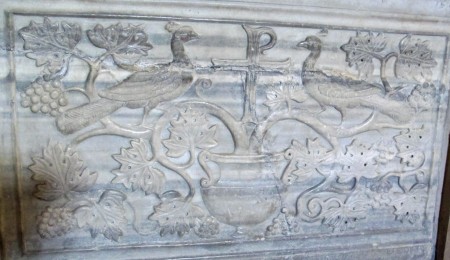 Data: instances of amen in Hebrew scripture and their translations (Excel version)

[3] Luke 23:38.  John 19:20 states that the sign was written in Hebrew, Roman (Latin), and Greek.  John is commonly thought to have been written somewhat later than Luke.

[4] John 19:13 refers to “a place called The Stone Pavement, or in Hebrew Gabbatha.”  Gabbatha is an Aramaic word. So too is Golgotha, referred to in John 19:17, “The Place of the Skull, which in Hebrew is called Golgotha.”  “In Hebrew” thus apparently meant Aramaic written in Hebrew characters.  The Greek New Testaments contains a variety of transliterated Aramaic words.  In some instances, a translation into Greek is explicitly given, e.g. Mark 7:34:

and looking up to heaven, he sighed, and said to him, “Eph’phatha,” that is {translated from Aramaic into Greek}, “Be opened.”

For some interesting comments about multilingualism in early Christianity, see Darrell Sutton’s notes.

[6] For instances of amen in the Hebrew Bible and their translation into Greek, Latin, and English, see the amen workbook.  I compiled it using the excellent Blue Letter Bible website.  The Greek New Testament uses amen more frequently (140 times in 114 verses, counting based on the Vulgate Latin text) than does the Hebrew Bible (30 times in 25 verses).  Moreover, New Testament manuscripts use amen with some inconsistency.  The Erasmus-Stephanus Greek New Testament text from about 1550 (Textus Receptus) includes more amen’s than the more recent Nestle-Aland 27th edition text (mGNT).  The latter is based on additional ancient Greek manuscripts and additional critical analysis.  For differences in use of amen in Greek New Testament texts, see, e.g. Luke 24:53, John 21:25, 1 Corinthians 16:24, 1 Colossians 4:18.  Double amen phrases occur 25 times in the Gospel of John.  In the New Testament, γένοιτο isn’t used in the sense of amen.  Amen in the New Testament is consistently represented in Greek as αμήν. Some amen instances in the New Testament are commonly translated as “verily” or “truly.”  William Harris insightfully argues that in the Gospels, Jesus may have used “amen” as a verbal gesture to quiet down a crowd before he taught further.

[image] Sixth-century transenna from the Basilica of Sant’ Apollinare Nuovo in Ravenna.  Image thanks to Sailko and Wikipedia.  Sarcophagi of Ravenna include similar designs of doves symmetrically facing a cross.