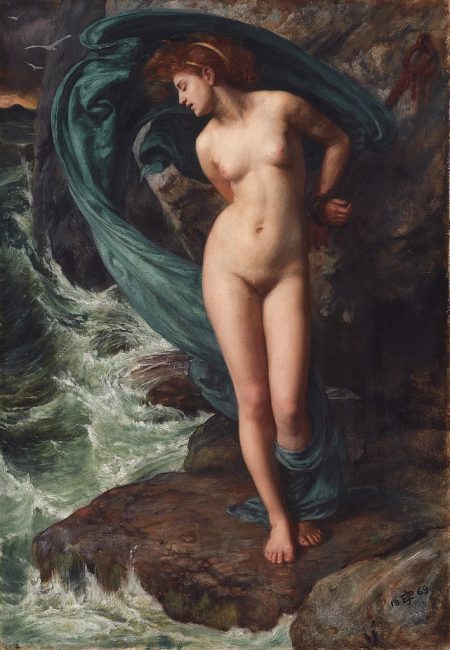 Andromeda was a ravishingly beautiful princess. Not surprisingly, her name in ancient Greek meant “ruler of men.” Beautiful women have ruled men through the male gaze. So misused and misunderstood in literary criticism of recent decades, the male gaze is a device like the face of Medusa. It’s meant to terrify men and turn them into stone-cold beings. With the help of gifts from gods, Perseus beheaded the hateful Medusa and turned her head into a weapon for good. With the support of medieval literature, men today deserve to be free to gaze as they wish, which isn’t the same as saying “I love you.” 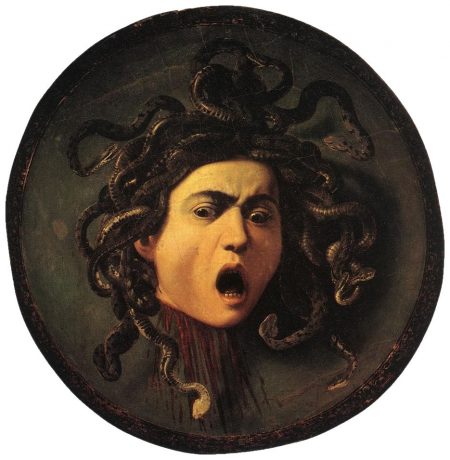 the human-hating Gorgons with snaky locks,
whom no mortal can gaze on and still have life.

Today Gorgons commonly find employment as campus sex police. Any person who seeks to enjoy the fullness of life must seek safety of thought against the chilling effects of Gorgons.

Though harm comes to me from love
I will not cease
to uphold joy and song
as long as I live;
and I am in such trouble
I don’t know what will become of me,
for she who has my heart,
I see that she does not deign to love me.

Perseus required suitable equipment to behead the horrible Medusa, that Jezebel of Jezebels. Like medieval women who expressed loving concern for men, the lovely Hesperides nymphs gave Perseus a knapsack into which to place Medusa’s severed head. The father god Zeus gave Perseus a hard sword and a cloak of invisibility like the vixen outfit Ysengrimus wore to the medieval Latin literature lectures at Fox College. Hermes lent Perseus winged sandals so that when it was time to flee, he could flee quickly. The career woman-warrior Athena, who though a virgin had great wisdom in interpersonal relations, gave Perseus a polished-mirror shield. That’s an extremely valuable weapon against haters.

But since he chooses to let me go,
he could at least agree
to keep my heart in joy
with light and playful banter.
It should not matter to his lady
if I stir him up a bit,
for I don’t ask him to stop
loving or serving her.

Let him serve her but return to me,
not let me die completely.
I fear his love will kill me,
that now makes me languish.
O my friend, so strong and good,
since you’re the best that ever was,
don’t try to make me turn away!

Unreciprocated love expressed in words creates pain for women and men. When a woman doesn’t welcome a man’s expressions of love to her, he is now authoritatively defined to be sexually harassing her. In actual life, women also sexually harass men. However, as the sex-composition of prisoners clearly shows, the justice system is rife with anti-men bias. Men must be careful with words of love to women if they don’t want to be locked up. Women have much more expressive freedom in relation to men. That isn’t a complete blessing. Women hurt from having men ignore their words of love.

Using one’s eyes, like using words, creates dangers. Jesus warned men, and implicitly women too, of looking on others lustfully. Islamic tradition permits forgiveness for a first, heart-stirred glance at a woman, but warned against the second.[4] More generally, love-sickness has long been regarded as a serious disease transmitted primarily through the eyes.

But gazing can be life-saving. Medusa threatened to kill anyone who looked at her. Perseus beheaded Medusa, rescued Andromeda, married her, and didn’t allow her to rule over him. A woman troubadour in the thirteenth century sung of the life-giving effects of her gazing on a man who no longer wanted her love. The male gaze can work in the same salvific way today for men in relation to women. Modern-day Gorgons are assailable. Men must act, if even only with their eyes, to assert that their lives matter.

Fair friend, so strong I desire you
on whom I fix both eyes.
It truly pleases me to gaze at you,
for I cannot find another as fair.
God, I pray that I may press you in my arms
for no one else can so enrich me.

I am rich as long as you remember
how I might come to a place
where I could embrace and kiss you,
for just from that my heart
can recover — it’s so hungry
for you and full of eagerness.
Friend, don’t let me die.
Since I can’t leave you,
at least assure kind looks to revive me
and kill my painful thoughts.

Castelloza wrote in southern France during the thirteenth century. For a critical edition of Castelloza’s songs, Paden (1981). Castelloza’s “Per ioi que d’amor m’avegna” may have been a response to or a prompt for Peirol’s “Per dan que d’amor mi veigna.” Macdonald (1996) pp. 5-6.

Bruckner, Shepard & White (1995) shows commitment to gynocentrism while grappling with the significance of whether a trobairitz (woman) or troubadour (man) wrote a given song. Bruckner elsewhere oxymoronically lamented:

But even with the most open mind and the best of feminist intentions, we cannot eliminate the indeterminacy that inevitably remains when we wish to verify not only who were the trobairitz, but also what constitutes their corpus of songs.

our trobairitz is bolder than most. She does dare to challenge the delicate humilis – sublimis opposition in order to fight back against her possible elimination by her lover who repudiates her for another woman. She finds a bold strategy to vacate her lofty position without upset by accepting the other woman in it. She loves to humble herself and yet outmanoeuvres her man and claims her right to live, love and sing. She can still find satisfaction in her past love for she has memories and songs to make from them. Our trobairitz proves herself adept in all the genres and thereby keeps her lover’s attention in some measure, for he, too, must recognize the experience which she validates in her singing. She encroaches very much on the troubadour’s territory. Is her behaviour subversive enough to upset some of the male’s real underlying power and to prove to him that courtly love can bring her something positive too, that the manoeuvres of courtly love are not completely exploited in the traditional male canso. This could well be the case. … if Castelloza is the author of “Per ioi,” she shows herself to have a rich talent for love song which her lover or any troubadour would have to fight hard to rival.

Macdonald, Aileen Ann. 1996. “A Refusal to be Silenced or to Rejoice in any Joy that Love may Bring: The anonymous Old Occitan canso, ‘Per ioi que d’amor m’avegna.'” Dalhousie French Studies. 36: 3-13.