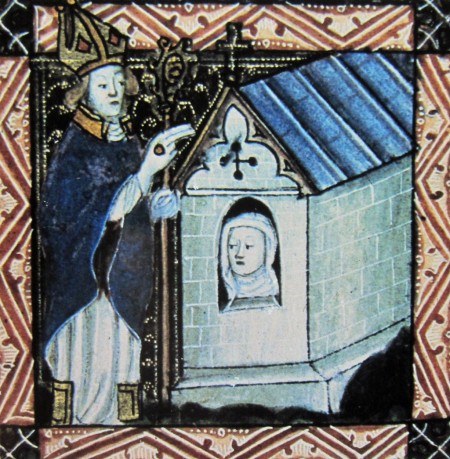 In the early thirteenth century, a friar in England offered instruction to anchoresses in dealing with men.  The friar wrote lovingly and compassionately to his “dear sisters.”  He strove to identify with women.  Through that identification, he expressed emotions that women might be too embarrassed to acknowledge even to themselves:

“But do you think,” someone says, “that I am going to leap on a man even if I do look at him?”  God knows, dear sisters, stranger things have happened. [1]

The friar thus counseled anchoresses against gazing upon men.

The friar treated men less personally and less sympathetically.  He figured men as beasts who might fall into the pit of a woman’s beauty: “a dog will happily go in wherever he finds it open.”  The friar counseled anchoresses:

my dear sisters, if any man asks to see you, ask him what good may come of it, since I see many evils in it and no profit.  If he is importunate, trust him the less.

The friar offered words of scripture for anchoresses to use in warding off men who might reach out to the curtain in their window or utter words of earthly love.  He advised anchoresses to say to such men:

Depart from me, you evildoers, that I may keep the commandments of my God; Godless men have dug pitfalls for me, men who do not conform to your law. [2]

The friar warned strongly against women having sympathy for men.  Men lamenting their sleeplessness, suffering, and incipient madness should be ignored:

No wooing is so base as that in the guise of a lament  — as if someone spoke thus: “I would not, though I died, think of doing anything filthy with you,” and swore deep vows: “But even if I’ve sworn not to, I have to love you. Who’s worse off than me?  It stops me sleeping a lot.  Now I’m very sorry that you know it.  But now forgive me that I have told it you.  Even if I go mad, you shall never more know how things stand with me.”

The anchoress forgiving the man and talking about something else is a mistake, according to the friar.  The suffering man is merely devious:

Afterwards he looks for his moment to break his promise, swears he has to, and so the evil grows, getting worse the longer it goes on.

The friar advises treating the man as a false friend and an enemy.[3]

While friars and anchoresses sought to lead lives of extraordinary spirituality, the friar had fundamental sympathy for the human weaknesses of anchoresses.  At the end of his thirteenth-century book of instruction to anchoresses, the friar wrote:

If you find that you do as you read, thank God earnestly.  If you do not do it, pray for God’s mercy and in the future work at keeping it better according to your strength.

[2] Psalm 199: 115, 85, which Ancrene Wisse (id. p. 31) quotes in Latin.  Authorities now counsel person subject to such harassment to get a restraining order requiring the man to stay away upon threat of imprisonment.  At work, a person could be accused of sexual harassment and fired for such behavior.

[3] The friar-author of the Ancrene Wisse may have formed this advice with knowledge of the Life of St. Mary the Harlot (Mary the niece of Abraham).  In that hagiographic Life, Mary, a twenty-seven-year-old anchoress, was lured out of her house by a man who softened her firm resolve:

the girl {Mary} eventually opened the door of the house where she lived as a recluse and came out to see him.  He assaulted her with his blandishments, bespattering her with the mud of his lust.

I have rebelled against God and slain my soul … Alas, what have I done! … Alas, how did I fall? … How my downfall occurred, I was unaware; how I become corrupted, I do not know.  A dark cloud overlaid my heart, preventing me some seeing what I was doing.

After Mary lost her virginity as described above, she ran off to a town and became a harlot.  From the fifth-century Syriac Life, trans Brock & Harvey (1998) p. 30.  In accordance with contemporary academic norms, Beresford (2007) states that Mary was raped.  In the U.S., such a conviction could put the man in prison for nearly a decade.  The friar-author is less oriented toward punishing men than preserving the welfare of the woman, as he understands her welfare.  That means her not losing her virginity and not becoming a harlot.

[4] A formal proceeding, and approval from a bishop, was required in fourteenth-century England in order for a woman or a man to become an anchoress or anchorite.  Modern court proceedings impose incarceration against a person’s will as punishment for criminal guilt and, in some cases, for inability to pay a court-imposed financial obligations.