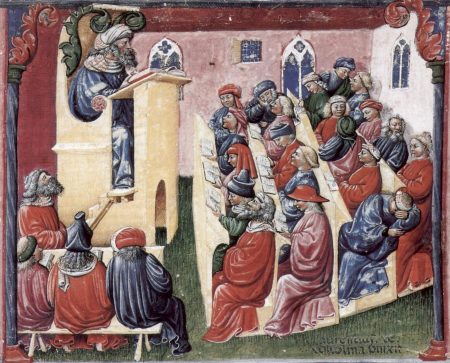 Just as in using Facebook, safety should be a major concern for men in studying medieval Latin literature. The horrific abuse and bullying that Maistre Mimin Estudiant suffered in late-fifteenth-century France provides a sobering warning. Mimin’s father Raulet and his mother Lubine sent Mimin to study Latin for all the wrong reasons. Raulet explained to Mimin’s future father-in-law:

Here’s the full skinny: we stopped
the usual to hire a Latin teacher,
to make the kid a mover-n-shaker
and a practicing master of right.
Then he could guard the goods tight
that he might inherit from us two.
But we’re less happy as it came through.
With all that taking and undertaking,
learning, new learning, and textual inter-taking
and grand Latin public speechification,
he has forgotten French and in actual action
he can no longer say a single word.

When asked to speak French, Mimin himself responded:

Studying Latin to become a lawyer is wrong. Lawyers use merely a smattering of Latin to intimidate the defenseless so that they can extract higher fees. The right reason to study Latin is to connect with men across millennia in order to understand the reality of men’s position in relation to women. Mimin was engaged to be married. Mimin’s fiancée spoke only French. Not being able to speak with one’s wife is a bad way for a man to begin a marriage.

Just as some academics have addressed men getting raped, Mimin’s professor proposed to rehabilitate Mimin from his mis-directed learning. The professor who instructed him in reading Latin declared:

His reading
has taken him to what state he is,
and to let him continue to do this —
that would be a very great danger.
In order not to fail to make him better,
we must watch him day and night,
and if he sleeps, wake him with light,
and not let him have a book nor read,
for that intoxicated him like mead,
and disturbed him in his understanding.

To cure Mimin of his Latin learning, his parents stuck his head into a bird cage. Like the imprisoned Malvolio in Shakespeare’s Twelfth Night, Mimin was horribly abused. He pathetically cried out:

I’m imprisoned in cage-atus
so can’t study my books-us,
and forgetting my Latin-us.
The professor no show me
and no establish for me
how now words can raise me.

Studying medieval Latin should serve as a means for men’s liberation, not their further imprisonment.

With his head imprisoned in a bird cage, Mimin once again became subject to gender subordination and post-structural gender oppression as established by Luce Irigaray, Judith Butler, Caroline Walker Bynum, and Phyllis Trible, among other professors. Mimin’s fiancée voiced the claims of female supremacists to Mimin’s father:

Women always are the rulers
of speaking. …
We have voices much sweeter
than men do; theirs are ruder.
A child who comes home from study
you don’t guide in the right way.

Mimin’s mother taught him to say “my darling {ma joye},” “my mother, I cry to you for mercy {ma mere, je vous crye mercy}.” Mimin’s fiancée taught him to say, “my lover, my cute little one {m’amye, ma mignonne}” and “my heart and my love I give to you {mon cueur et m’amour je vous donner}.” With such teaching, Mimin was restored to his normal position in the social order.

Women’s dominance in social communication keeps men in their cages. The professor of Latin understood the source of women’s social power:

This is women at their working.
I say it, without any blaming,
but in talking, they are renowned.
…
At least we have seen well how
women are renowned for talking.
…
To put it quite lightly,
sometimes without even trying.

Apparently looking forward to marriage with Mimin, his fiancée declared:

There’s nothing else to say.
It’s not just parrots, various
magpies, starlings, and anti-meninists
that women by their soft languages
make to speak in their cages.
How could we not have done it,
my love?

Deprived of useful Latin learning and living in a socially constructed cage, Mimin sung gynocentric tunes until the end of his miserable days. 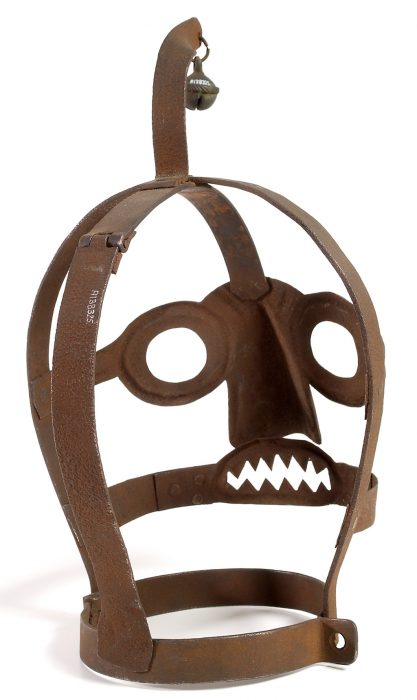 Unlike warring tribes, most men and women throughout history have lived intimately entangled lives. Amazons and other female separatists aren’t good role models for most men. As the tragic case of Maistre Mimin Estudiant makes clear, men, even as they urgently study medieval Latin literature, must retain the ability to talk with their mothers, sisters, daughters, wives, fiancées, and girlfriends in the vernacular. Medieval Latin literature, however, provides men with more than a slave’s escape from the vernacular. It can change how they engage with the gynocentric world through critical enlightenment.

The story of Mimin is from Farce de Maître Mimin étudiant {La farce de maistre Mimin estudiant}, a play written in Normandy, France (perhaps Rouen) probably about 1480 to 1490. Mimin became a stock name for a silly pedant. From the mid-sixteenth century, local French authorities began to repress this and other transgressive farces. Such censorship of critical thought and literature supported the rise of absolutism in France. Beam (2007).

All the French text above is from Farce de Maître Mimin étudiant in the critical edition of Tissier (1996) v. 3, pp. 215-272. Philipot (1931) is an alternative. Viollet-le-Duc (1854) vol. 2, pp. 338f provides a reasonably good text freely available online. The English translations above are mine, benefiting from the much looser prose translations of Enders (2013) Ch. 12. Vigorously and repetitiously warning against play with popular songs without seeking permission, id. staunchly supports symbolic capitalism. No permission is currently required to ridicule professors for their narrow-mindedness.

[images] (1) Master Henricus de Alemannia teaching students. Miniature made by Laurentius de Voltolina in the second half of the 14th century. Preserved as Min. 1233 in the Kupferstichkabinett Berlin. Via Wikimedia Commons. (2) Photo of Belgian iron mask used to publicly humiliate and punish those speaking in unauthorized or unwelcomed ways. Artifact and photo preserved as item A138325 (photo L0035595) in the Wellcome Collection. Via Wikimedia Commons.

One thought on “caution for learning Latin: the case of Maistre Mimin Estudiant”