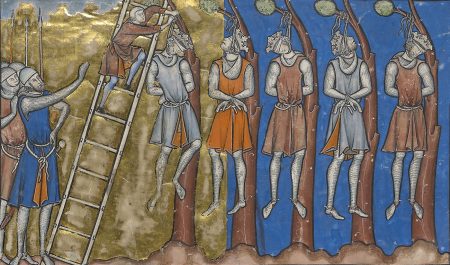 Today, men’s lives are valued far less than women’s. Men’s lives were also valued less than women’s lives in medieval Europe. The problem isn’t merely chivalrous men killing other men in service to women. A more fundamental problem is violence against men being normalized as only violence. In thirteenth-century Italy, Alberigo da Romano, the ruler of the city Treviso, brutally killed many men. Yet the Cardinal of Lombardy shrewdly displayed Alberigo’s cruelty to women to spur a crusade among local men to kill Alberigo and his family.

Alberigo had twenty-five civic leaders of Treviso hanged on a single day, yet they had neither offended nor harmed him in any way. … And he required thirty noble women — their mothers, wives, daughters, and sisters — to come and watch the hangings. And not only that; he also wanted to cut off the noses of these women. But by the good deed of one who is called Alberigo’s bastard son, but who isn’t, that action was dismissed. However, he had their clothes cut off from their breasts down so that with their whole bodies nude they were seen by those who were being hanged. And he had the men hung near the ground, and he forced the nude women to pass between the men’s legs. With their legs and feet they kicked the women’s faces as they were dying in the bitterness of their lives. And the women had to endure such mockery in their anguish and sorrow of being alive.

The men being hung had to see women they loved sexually exposed. Alberigo forced the women to go between their men’s involuntarily jerking legs and feet as the men suffocated and died in hanging. That arrangement viciously parodies sexual intercourse. Amid the horrific cruelty was a successful intervention to save the women from having their noses cut off. Salimbene’s concluding concern is that women had to endure mockery as they lived. The men endured terrible mockery and were killed. As is commonly the case, the men’s fate was less notable, and more brutal.

Salimbene continued with a focus on the women. He reported:

After this Alberigo had the women carried off beyond the river called Sial or Sile, and then to go wherever they wished. The women made for themselves with the pieces of garment that they had about their breasts coverings for their genitals, that is their vaginas. Then they walked the whole day for fifteen miles through wild fields, through thorns and briars and nettles and burrs and thistles, with naked feet and totally naked bodies and being bitten by flies. They went weeping, for they had cause for weeping, and they had nothing to eat.

The women had just watched men they love be brutally killed. That undoubtedly hurt them more than briars and flies. That undoubtedly caused them to weep more than for not having anything to eat. Weeping women are a potent persuasive force. Salimbene thought not of the men hanging dead, but of the weeping women.

When the women became mired in the Venetian lagoons at night, a lone fisherman working then saw them and helped them. With his little boat he transferred them across the lagoon one by one to the safety of solid ground. The last remaining woman he treated differently:

After he had transported all of them except one, he took this last one to his fisherman’s home and fed her well and treated her with kindness, courtesy, humanity, love, and respect.

Authorities today would suspect the man of raping or at least sexually harassing that nearly naked woman. But the impoverished single fisherman apparently helped the desperate, nearly naked women without compensation of any sort. Men are innately virtuous and good. As he had promised the women, early the next morning he got a larger boat and transported all of the women to the Church of San Marco in Venice. Then the fisherman went to Lord Ottavio, the Cardinal and papal representative in Lombardy, and told him of the women’s great suffering and their present location.

The Cardinal both helped the women and exploited them politically. The Cardinal immediately went to the women. He had food given to them, but not clothing. Like a shrewd media operative today, the Cardinal recognized an opportunity:

he sent a messenger throughout the city saying to all: come swiftly and quickly and without any delay to the Cardinal at the Church of San Marco — all men and women, all the small and the great, young men and young women, the old with the young. Come, for he had such to tell them, as they had never before heard, and such to show them, as they had never before seen. What more? The call very quickly gathered all the citizens of Venice to the Cardinal in the square of the Church of San Marco. There they heard from him the whole story written above. When he recited it, he made come before them the women in their shameful and nude state, as the wicked Alberigo had shamefully done to them.

Women historically have mobilized men to kill other men. The response to abuse of women in thirteenth-century Italy was similarly violent, but with a medieval understanding of gender equality:

When the Venetians had heard the whole story told above and looked upon those nude ladies, they cried out in loud voices, saying: “Let him die, let that wicked man die! Burn him and his wife alive, and all their progeny eradicate from this age! Then the Cardinal said, “Holy Scripture agrees with you, for it likewise curses the impious man … Let them be blotted out of the book of the living, and with the just let them not be written.” Then they all cried out, “So be it! So be it!” After this, by the will of the entire city, all men and women, the Cardinal preached a crusade against the wicked Alberigo. Whoever would take it up and go to destroy Alberigo — or send someone in his place, paying all expenses — would receive a plenary indulgence for all the sins he had. With the authority of all-mighty God and the blessed Apostles Peter and Paul as well as by his authority as legate vested in him by the apostolic chair, he confirmed giving that indulgence of repentance to all. All were thus excited, and all — man and woman, from little to the great — took the cross.

By telling of Alberigo’s vicious acts and displaying the near-naked women, the Cardinal incited all the people of Venice to what he formulated as a Christian mission: to kill Alberigo and his family

The Venetians subsequently brutally fulfilled this mission against Alberigo. They were like a Twitter mob enraged against a man who criticized a woman, but the medieval Venetians were less gender-biased and more reality-based:

Alberigo, along with his wife and sons and daughters, perished by a wicked death. Those who killed them yanked off the children’s arms and legs while they were still alive, while their parents were watching, and struck the father and mother in the mouth with those limbs. Then they tied the mother and daughters to stakes and burned them. And those daughters were young and the most beautiful of women in the world. They were guilty of nothing. Their killers didn’t spare the innocence and beauty of the daughters because of great hatred for their father and mother … From there they came at Alberigo with pincers and each one in the street tore flesh from Alberigo’s body while he was still living. Thus they destroyed his body amid jeers and insults and heavy torments.

Hateful gender bias existed even in medieval Europe. The husband was killed much more viciously than the wife, yet surely the wife deserves equal credit for her husband’s deeds. Moreover, Alberigo’s wife Margaret “called noble ladies and matrons whores and prostitutes {nobiles dominas et matronas appellabat putanas et meretrices}.” Why wasn’t she killed as viciously as her husband was? Salimbene expressed special solicitousness toward the young and beautiful daughters. Salimbene scarcely noted the sons’ deaths. In contrast to dominant myths, in reality it’s a women’s world, especially if the women are young and beautiful.

The story of the Venetians’ crusade against Alberigo underscores the importance of women. In thirteenth-century Italy, Albertanus of Brescia wrote of how Prudence dissuaded her husband Melibee from launching a vendetta against neighboring men. If the Treviso women had refused to allow Cardinal Lord Ottavio to make a spectacle of their nakedness and suffering, Alberigo and Margaret might have been restrained more humanely. Their innocent sons and daughters might have been spared.

Women should refuse to allow their suffering to be exploited to incite horrific violence. The Spartan mothers ordering their sons to victory or death is barbaric. Even strong, independent, highly privileged single women lamenting the cruelties they have endured must contribute to reducing violence against men.

The killings of Alberigo da Romano, his wife Margaret, and their children occurred in Treviso (in northern Italy) on August 26, 1260. Alberigo’s killing of men leaders of Treviso apparently happened in 1258. Holder-Egger (1905) p. 363, n. 11; p. 366, n. 1. Salimbene described himself as a first-person witness to the killing of Alberigo and his family: “I saw these things with my own eyes {Vidi ista oculis meis}.”

The above account of Alberigo da Romano’s rule, acts, and fate is from Salimbene’s Cronica. For all the quotes, the Latin texts are from Holder-Egger (1905) pp. 363-6. The English translations I have adapted from those of Baird, Baglivi & Kane (1986) pp. 365-9.