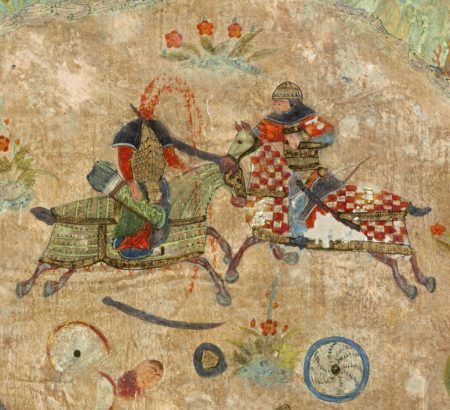 Around the world and throughout history, violence has been predominately violence against men. Communally organized war has long been structured as men killing other men. In the U.S. today, about four times more men than women suffer death from violence. That’s not simply because gynocentric society teaches that women’s safety is more important than men’s safety. Violence against men often specifically targets men’s sexuality.

Consider a fifteenth-century French farce. A married man joyfully, but discretely, sings of his consensual sexual affair with a young woman. His wife jealously suspects her husband’s infidelity. With her neighbor Colette, a sexually promiscuous mother of a daughter, she arranges to trick her husband into confessing his sexual affair. Colette disguises herself as a priest. The wife coerces her husband into going to confession with the “priest” Colette. He eventually confesses to the priest that he is having sex with the daughter of his neighbor. That neighbor is Colette. She, outraged, runs to tell the wife.

Colette and the wife plan to beat the husband sexually and violently. Colette declares that, acting as the priest, she will command the husband to submit to the following penance:

That all naked,
down on his hands and knees,
he’ll beg you for mercy and then we
two will each have in our hands
a big stick or at least
a branch with very good prickers.
Then from his head to the soles
of his feet we’ll beat him up very well.

That violent attack surely didn’t spare his genitals. After they had beaten him in this way, the husband cried out, “I’m broken everywhere {Je suis tout cassé}.” Colette responded:

You’ve chased very well
my daughter high and low, all in all,
and have made your dick very fat
with her; here’s a flailing to your health!

Colette implicitly figures the husband as growing healthy (engorged / fat) with his vigorous thrusting (flailing) against her daughter. She in response satirically gives him a flailing that greatly harms his health. The wife picks up on the sexual innuendo and approvingly declares:

That wasn’t done for nothing.
At least he was rubbed up
and his back was well scratched.

Women usually commit violence against men, including violence to control men sexually, through having men act as women’s agents of violence. The play of the farce gives the wife and Colette the liberty to enact personally their violence against the husband.

Some men had cords tied around their heads and pulled so tightly that their eyes pushed out from the sockets and fell down on their cheeks. Other men were tied up solely by the thumb of the right hand to the left and their bodies thus totally suspended above the ground. And others were tied up and suspended by their testicles.

When he held any captives for ransom, he would hang them, sometimes with his own hand, by their testicles, and when these were torn away from their bodies, as happened frequently, their vital organs would burst out at almost the same time. Others he would hang by the thumbs or by the penis itself, then place a stone over their shoulders to weigh them down

Violence applied directly to men’s testicles and penises emphasizes the gender of the victims. Historians and literary scholars have tended to treat violence against men as normal — merely “violence.” That’s ideological blindness. Violence is applied and reported with acute sex discrimination among persons.

The fourth-century hermit Ammonas of Tunah understood social persecution of men for their sexuality. The sayings of the Christian desert fathers record a heart-warming story about Ammonas:

Once Abba Ammonas went somewhere to eat. A monk there had a bad reputation. A woman happened to come. She went into the cell of the brother who had the bad reputation. Those who were living in that place were troubled when they learned of it. They got together to drive him out of his cell. Knowing that Bishop Ammonas was at that place, they went and asked him to go along with them. When the brother became aware of this, he took the woman and concealed her in a large barrel. When the crowd arrived, Abba Ammonas realized what had happened. He covered up the matter for the love of God. In particular, he came in, sat down on the barrel and ordered the cell to be searched. When they had searched diligently and not found the woman, Abba Ammonas said to them: “What is this? God will forgive you,” and offering a prayer, he obliged them all to withdraw. Then, taking the brother’s hand, he said to him, “Pay attention to yourself,” and so saying, he went away. [5]

Ammonas surely didn’t approve of the monk having sex with a woman. Yet Ammonas, with keen understanding of gynocentrically distorted justice, refused to participate in mob action against the monk for sexual sin. Crude vigilante justice and mob persecution of men for sexual sins is a terrible problem. A chronicler writing in the thirteenth century reported that Ammonas took decisive action to protect himself:

this holy man did as does a beaver or similar animal, who knows that hunters seek to kill him for his testicles. He saves himself by sacrificing part. He castrates himself with his teeth and gives up his testicles and thus they allow him to escape.

Mob action against men for their sexuality is far worse today than it was in the time of Ammonas the hermit. Many men today effectively castrate themselves to escape mobs that attack and persecute men with testicles. Such self-castration is horrible, but reasonable under the circumstances.

An enlightened commitment to truth and good reason offers the best hope for lessening violence against men. Given the actual facts about violence, ensuring men’s safety and combating persecuting of men’s sexuality should be preeminent social concerns. Even those who don’t regard men as fully human beings should understand that promoting men’s safety helps to advance women’s safety. We must make the world safe for men.

the physical violence of a folk vengeance that appears to have struck as odd no one at all. The Husband’s “penance” is to stand there and take it as his Wife and Colette beat the crap out of him.

Farce de celuy qui se confesse à sa voisine is a fifteenth-century play consisting of 616 lines, most of which are octosyllabic verse. According to Enders:

The linguistic highpoint of this play is its unabashed, macaronic, grammatically incorrect, and some might say sacrilegious and even blasphemous borrowing of the Latin language of the confessional.

[2] Enders describes the husband as having “deflowered” Colette’s daughter. Enders (2013) pp. 108, 136. The term “deflower” is associated with the brutalization of men’s sexuality.

[3] Salimbene de Adam, Cronica {Chronicle}, Latin text from Holder-Egger (1905) p. 645, my English translation, benefiting from that of Baird, Baglivi & Kane (1986) p. 651. These were acts of freebooters from Liguria, living in Gesso in north-western Italy.

[4] Guibert of Nogent, Monodiae {Songs of Self} 3.11, Latin text from Bourgin (1907), English trans. from McAlhany & Rubenstein (2011) (adapted slightly). The person administering the vicious violence against men was Thomas de Marle, Lord of Coucy. He was thought to be the son of Enguerrand of Coucy.

Violence against men’s genitals exists in some of the earliest literature. Hesiod’s Theogony attests to castration culture. In Hebrew Scripture, the massacre of men at Schechem involved prior wounding of the men’s genitals (Genesis 34), and the killing of Abner came about through a wound to Abner’s abdomen (2 Samuel 3:27).

[5] Apophthegmata patrum, collection alphabetica, Ammonas 10, from Greek trans. Wortley (2014) p. 63 (with my insubstantial adaptations for readability). The main underlying Greek source is Patrilogia Graeca (PG) 65: 71-440. Ammonas’s only words to the monk, “Pay attention to yourself,” are a variant of the Socratic saying “know yourself.” They poignantly call the monk back to his Christian vocation. For an alternate English translation made from a French translation of the ancient Greek, Ward (1984) p. 28, specific text available here.

[6] Salimbene de Adam, Cronica, Latin text from Holder-Egger (1905) p. 142, my English translation, benefiting from that of Baird, Baglivi & Kane (1986) p. 129. The underlying claim that a male beaver chews off its testicles is from Isidore of Seville’s early-seventh-century Etymologiae 12.2.31.

[image] Man being decapitated. Image (colors digitally enhanced) from manuscript of the Shāhnāmah of Firdawsi. Manuscript made in 1618. Image 34 from digital reproduction of book preserved in the Library of Congress (Washington, DC) at call number PK6455.A2