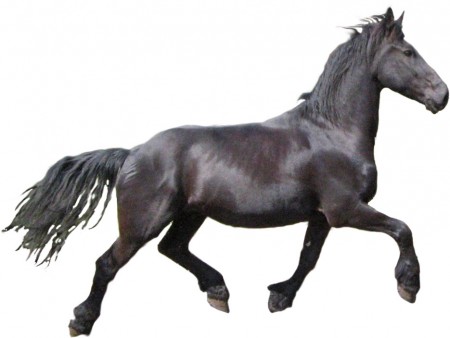 Medieval Latin literature recognized that a dog is a man’s best friend. But horses too can be worthy companions for men. Consider the story of Raso in Walter Map’s twelfth-century Latin work De Nugis Curialium.

Raso was a Christian knight. A Muslim emir ruling a neighboring city threatened Raso’s castle. Although the emir had more wealth and men than Raso, through superior fighting spirit Raso and his son successfully defended their castle. They were like the Greeks who beat back the Persians in ancient history.

Raso, an aging widower, married again for strategic advantage. He married a wealthy woman with many allies. She was also very beautiful. Raso loved her dearly and completely trusted her claims of fidelity. He gave his new wife total freedom and total rule over her step-son and his band of skillful fighting men.

One day, the emir and a large number of his knights attacked Raso’s castle. Raso and his son vigorously fought against the emir’s force and took the emir and others as prisoners. With the look of his eyes, the emir, an attractive Muslim youth, captured the love of Raso’s wife. She guilefully took charge of maintaining him in captivity:

She assigned him a separate cell, dark and strongly built, and hung the key of it at her own girdle. She tamed her prisoner by scant measure of food and drink, and the little she thought fit to allow him she cast in to him through the window as if he were a bear. She allowed no one access to him, as if she trusted no one; she knew well that all pride is tamed by hunger. [1]

The Muslim emir, betraying his beliefs, agreed to love Raso’s Christian wife. Raso believed in his wife’s fidelity, but he should have been an unbeliever. The emir and Raso’s wife together fled to the emir’s city. They rode away on Raso’s favorite horse.[2]

Raso realized he had been foolish. He exclaimed:

I am the worst befooled, that in defiance of tales and of history and of the advice of all wise men from the beginning, I trusted myself to a woman.

Raso lost the emir as a prisoner, he lost his wife, and he also lost goods those two had taken with them. But what Raso mourned endlessly without consolation was the loss of his beloved horse.

Seeking to recover his horse, Raso disguised himself as a beggar and sneaked into the emir’s city. Raso’s wife, however, recognized him and betrayed him to the emir. At his wife’s urging, the emir arranged to execute Raso. But Raso’s son learned of the planned execution. From ambush, Raso’s son and his men attacked the execution party, slaughtering many. Raso’s son killed the emir, but his step-mother escaped on his father’s beloved horse. Raso, although saved from death, was disconsolate. He longed to recover his horse.

Again Raso disguised himself as a beggar and entered the city. He overheard a rich knight propositioning Raso’s wife and proposing that they flee. She agreed to meet the rich knight an hour before dawn at the southern gate of the city. Raso went back to his castle, put on his knight’s armor, and took up watch at the southern gate of the city. His wife, sleepless from desire for the rich knight, arrived in the pre-dawn darkness with Raso’s horse. She mistook Raso for her rich knight. Raso mounted his horse and gave her the horse he had brought. He then merrily set off with his horse and his wife.

Unfortunately, Raso was so tired from his long night that he fell asleep on his horse. Leaning on his spear and sleeping, he started to snore. His wife recognized his snore. She also saw the rich knight and his force of men off in the distance. She urgently gestured them to come to her and the snoring Raso. When the rich knight and his force closed in, Raso’s horse, not willing to be taken without a fight, raised his head, neighed, and dug his hooves against the ground. Raso then awoke. He bravely confronted the attack and called to his son, who was patrolling nearby. Raso and his son devastated the rich knight’s force. His son beheaded his step-mother and rode off in triumph. Raso happily returned home on his horse.

A husband must do more than just love his wife. He cannot know for certain what his wife will do. He should always take care to preserve his relationship with his dog or his horse.[2]

[1] De Rasone et eius uxore (Of Raso and his Wife), in Walter Map, De nugis curialium, Dist. 3, c. 4, from Latin trans. James (1983) p. 265. The text notes, “The emir she thought could give her all that an old husband could not.” The subsequent quote is from id. p. 267. The Latin and English translation of this story span id. pp. 262-71. The story of Zetus in Petronius Redivivus (piece VII, Analecta Dublinensia), written in England late in the twelfth or early in the thirteenth century, has considerable similarities with the story of Raso in De nugis curialium. Colker (2007) p. 3.

These adventures {of Raso} … are recounted without humour or a sense of irony, but do allow a modern reader — although this is certainly not Map’s intention — to gain a great sympathy for the wife’s decision to run away while perhaps feeling frustrated at so useless a story.

Most modern readers lack sympathy for violence against men or men being incarcerated for nothing more than having consensual sex and being poor. Walther Map had a better sense of humor and irony than have many modern readers.

[image] Elisabeth’s horse Walraven. Horses can be worthy companions for women, too. Thanks to Elisabeth for sharing the image of her horse under a Creative Commons By-2.0 license.