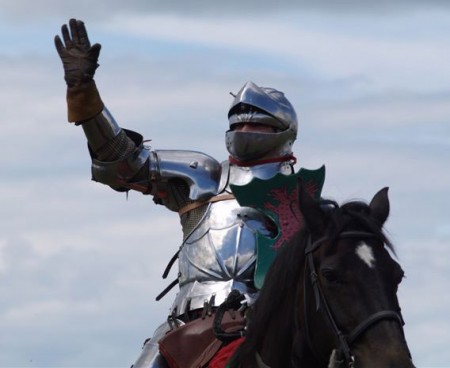 The medieval Rollo, an eminent, prosperous knight but ignorant of the feminine imperative, had a beautiful wife. His neighbor, a youth named Resus, fell madly in love with her. She strongly rebuffed his amorous entreaties.

Realizing that he had a much lower sexual market value than Rollo, Resus resolved to improve himself. Ignorant men in the Middle Ages believed in courtly love and ideals of chivalry. Men foolishly thought that valiant acts of violence against other men intrigued women more than jerk-boy attitude towards them. Resus thus proceeded ignorantly:

Now with breathless speed he sought out warfare, took part in all encounters everywhere, learned well the tricks, changes and chances of battle and received the knighthood from Rollo himself … where he {Resus} found a quarrel slackened or slumbering he stirred it up and brought it to a head, or where he did not, he was still the foremost and strongest of all. Superior to all, he soon went beyond the praises of his own neighborhood, and, unsurpassed, burned to attain wider fame. [1]

Despite his impressive feats, his inner man was weak. He wept and mourned and pined for the woman who rejected him. Nothing he did could outweigh his self-degrading, self-pitying attitude toward women. In response, Rollo’s wife repelled and spurned him. She thrust him further down in despair.

Significant developments ignited Rollo’s wife’s love for Resus. One day Resus happened to meet Rollo, his wife, and other eminent persons journeying. Resus briefly joined the traveling party. He conversed courteously with the men. He gave no indication of caring about Rollo’s wife. When he rode away from them, he didn’t look back. Rollo for a long time gazed after him in silent contemplation. Rollo’s wife asked why he was so preoccupied with the departing figure of Resus. Rollo said to her:

I looked with delight on what I wish I could always see, the noble wonder of our time, a man distinguished for birth, beauty, character, wealth, renown, and every earthly gift, and what the book could not find  — at all points blessed.

Love for Resus welled up in Rollo’s wife. When she returned home, she rushed into an inner room. There she wept for having rejected Resus.

Rollo’s wife resolved to seek a tryst with Resus. She sent a messenger to him with her proposition. Inflamed with desire, he came to her. They stole into a secret chamber prepared for their love-making. She said to him:

You are wondering, perhaps, dearest one, what it is that has made me yours all at once after so many harsh repulses. Rollo was the cause: I had not believed common report, but his words — for I know him to be most truthful — persuaded me that you, as far as time, place, and means allow, are wiser than Apollo, kinder than Jove, more lion-like than Mars; nor is there any blessing enjoyed by the gods save immortality which he omitted in your praises. I believed, I confess it, and surrendered, and here with joy I offer you the pleasure you covet. [2]

The medieval “good man” was a euphemism for a man who got cuckolded. Some would say today’s Rollo, who seeks to educate men about the feminine imperative, isn’t a good man. Judge for yourself.

[2] Walter Map, with his keen appreciation for interpersonal relations and feminine psychology, has the lady read the knight’s mind (“You are wondering, perhaps, …”). In Gerald of Wales’s version, the knight explicitly asks the lady why her attitude toward him has reversed. That explicit question also occurs in the similar version in Ser Givoanni Fiorentino’s Il Pecorone (The Blockhead), 1.1. Il Pecorone is a collection of fifty short stories written in Italian between 1378 and 1385. So too for the version in Il Novellino 3.1 (21st novel). Il Novellino, by Masuccio Salernitano (1410–1475), was first published in Naples in 1476. For the text of all these versions, Hinton (1917).

A common feature across all these versions is men’s ignorance of women, women’s privilege in love relations, and the importance of men’s solidarity with each other for constraining women’s dominance. Cf. Mann (2001) pp. 106-7.

[image] Re-enactor in armour at the Tewkesbury Medieval Festival, 13 July 2008. Image by Andy Dolman, licensed under a Creative Commons Attribution-ShareAlike 2.0 license. Thanks to Wikimedia Commons.