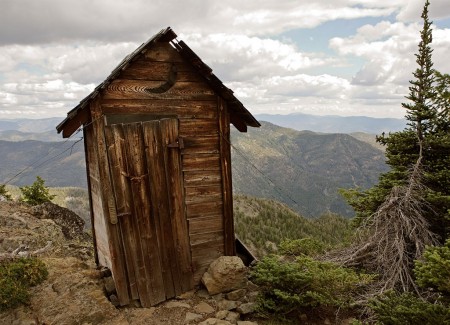 Do you know someone who seems to be possessed by the devil? Of course you do; those sort of people are everywhere today. You might suggest to one of your devil-possessed family members or friends that she pray for relief to Saint Æthelthryth, a sixth-century Anglo-Saxon saint. According to a chronicle written in England in the 1170s, a devil-possessed monk prayed to Saint Æthelthryth for relief. He subsequently had extreme, foul-smelling diarrhea that purged the devil from his body.

According to the chronicle, the monk had left early from his brother monks’ normal evening prayer service in their monastery. That left the monk vulnerable to the devil’s attack. Being attacked by the devil can also happen to persons who don’t participate in family holidays and family meals. The monk’s situation got very ugly:

When the service was over, the abbot and the community, as they went out to the first entrance to the cloister, saw the demoniac youth. He was raving against everyone, making wild threats, and flailing around with abuse. By kicking with his feet and biting with his teeth, he was trying to hurt some of the men who were constraining him within their arms, .

The community brought the young monk to the tomb of Saint Æthelthryth. There throughout the night they prayed to her for help. By morning the young young monk had returned to his senses. However, “the internal looseness of his stomach was torturing him, and he was in need of evacuation in a privy {ventris resolutio intestina torqueret, et secreto exitu indigeret}”:

After being taken, therefore, to the necessary place, he experienced as great an efflux as if all his bowels were being poured out. After the raving of his mind, such a stink of the stomach was ejected that the air throughout the nearest domestic buildings was scarcely bearable. As the polluted exhalation spread itself through every nook and cranny, scarcely anyone escaped its vapor. And this uncleanliness was no less extreme than the former madness, but rather both attacks turned out equal, one to the other. One was horrible because of his going out of his mind. The other was astonishing, because of the effluvium of his stomach. It was as if the most evil spirit was either totally being changed into excrement or, on being ejected, was taking the latrines themselves with him.

Evidently a person’s soul can be cleansed through prayer to a saint and extreme diarrhea.[3] If you’re having personal difficulties with a family member or friend, be intellectually courageous and suggest this historically attested cure. The foul smell will be only temporary. Peace and joy spending time together with beloved others is an eternal blessing. 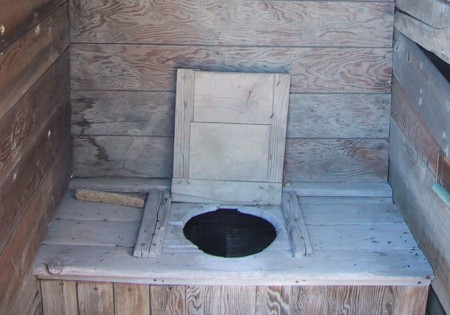 [1] Liber Eliensis Bk. II, Ch. 129, “About a certain brother who had gone out of his mind but was cured by the merits of saint Æthelthryth {De quodam fratre qui mentem excesserat sed meritis sanctae Ætheldrethae sanato},” Latin text from Stewart (1848) pp. 262-3 (there chapter 128), English translation (modified insubstantially) from Fairweather (2005) p. 247. Subsequent quotes above are similarly sourced. The monk’s name was Edwin and the religious service he skipped out on was Compline. Liber Eliensis was compiled at a monastery on the Isle of Ely (England) in the 1170s.

Marie de France translated into Old French the story of Saint Æthelthryth exorcising the monk through diarrhea. Marie de France included it in her Life of Saint Audrey (Æthelthryth) ll. 2953-2994. For that text and a translation, McCash & Barban (2006) pp. 167-9.

Since this occasion,
there has been no devil so bold
as to dare assail the wall
of the monastery  or come in
lest he, too, be ejected
the same way his companion had been.

[3] Saint Æthelthryth is not the only saint reported to have exorcised a demon through prompting extreme diarrhea. Sulpicius Severus’s fifth-century Life of Saint Martin records:

When the demon was compelled by punishments and tortures to flee out of the possessed body, while he had no power of escaping by the mouth, he was cast out by means of the belly’s defluxion, leaving disgusting traces behind him.

Demons and devils were associated with latrines and bowel movements in a variety of ways. In the Life of Saint Gengulph, written in Latin about 900 GC, the clerk who cuckolded Gengulph suffered disembowlment while using the latrine. Other sinful men reportedly defecated out their souls, died in latrines, or lost control of their bowels and continually soiled themselves. Bayless (2012) pp. 130-5.

Bayless, the leading scholar of medieval excrement, makes a highly pungent claim about that subject:

excrement was not merely used as a figure of speech but was central to the popular medieval metaphysics. It was not a symbol of sin or a consequence of sin: it embodied sin {emphasis in original}. It was an alternate manifestation of sin, as ice is an alternate manifestation of water. Excrement was sin made material. In the modern period, filth and excrement are deplorable but otherwise meaningless material realities, most useful as metaphors. In the Middle Ages, filth and excrement were the foundation of the understanding of human history. They were as important as sin because they were sin {emphasis in the original}. This a radical and crucial difference from modern attitudes.

Bayless, Martha. 2012. Sin and Filth in Medieval Culture: the devil in the latrine. New York: Routledge.

Fairweather, Janet, trans. 2005. Liber Eliensis: a history of the Isle of Ely from the seventh century to the twelfth. Woodbridge: Boydell.

Roberts, Alexander, trans. 1894. “Sulpitius Severus on the Life of St. Martin.” In A Select Library of Nicene and Post-Nicene Fathers of the Christian Church, Second Series, Volume 11. New York.