Mooning an authority — publicly presenting one’s ass to her or him — signifies both submission and rebellion. Along with a reference to legal pleadings of the “shameless” woman Carfania, a Roman law barred women from advocating on behalf of others in court. European medieval literature imagined that Carfania had mooned the court.[1] In the popular medieval work Solomon and Marcolf, the peasant Marcolf mooned Solomon, the eminent judge and king. Carfania and Marcolf, while commonly associated with mooning, had much different social positions in gynocentric society. Today law holds behind bars about fifteen times as many men as women. The different literary treatments of Carfania and Marcolf reflect nearly unremarkable disparate punishment by gender under law.

Carfania had much higher social status than Marcolf. Carfania was the wife of a Roman senator. She was prominent enough to be publicly recognized for repeatedly appearing in court. She also had enough education to know how to speak in court.[2] Marcolf, in contrast, was a peasant. He spoke in figures of the barnyard and bodily functions. Marcolf being a man also mattered. Because women’s physical violence is commonly trivialized or ignored, a lowly woman can threaten to give a male official a black eye and gain advantage from that threat.[3] If Marcolf made such a threat, he would be beaten or locked up. 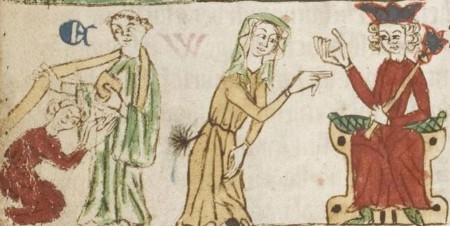 Medieval images of Carfania and Marcolf evince starkly contrasting statuses. A description of Germanic customary law in 1274 referred to Carfania as displaying her “rear pudenda” to the court.[4] Beginning about 1300, illustrated books of German law included images of Carfania addressing a judge. She is well-dressed and not depicted as ugly. She stands in front of the judge and addresses him with a pointing gesture and leaning-in aggressiveness. Her mooning the judge is represented with a piece of bushy, black hair attached to her waist like a ring of keys. Her genitals aren’t associated with a position of submission. 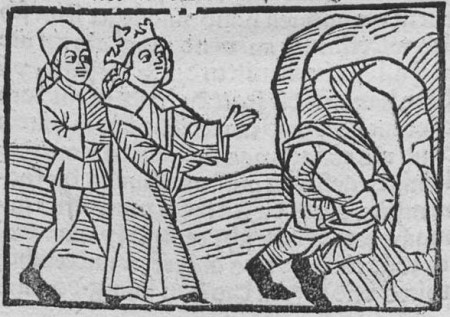 Marcolf, in contrast, is illustrated in a position of complete submission. He is bent over or down on hands and knees like an animal. Marcolf’s buttocks are bared, visible to the viewer, and positioned for Solomon to penetrate.[5] At least two images obscure Marcolf’s face in an earthen cave. In any reasonable societal scale of dominance and subordination, Marcolf would rank far below a woman like Carfania. The medieval images of Marcolf are extraordinary depictions of the publicly unrecognized position of many, ordinary men.[6] 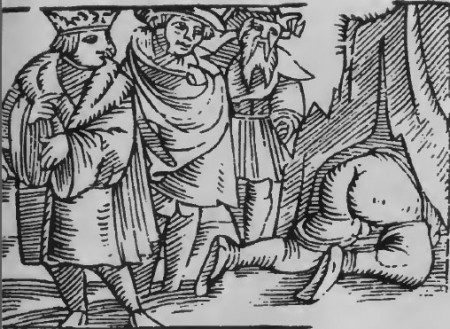 ubi caritas, Deus ibi est
{where there is charity, there is God} [8] 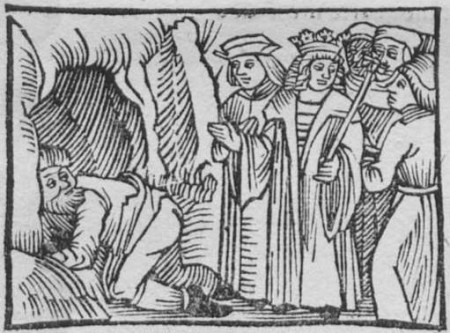 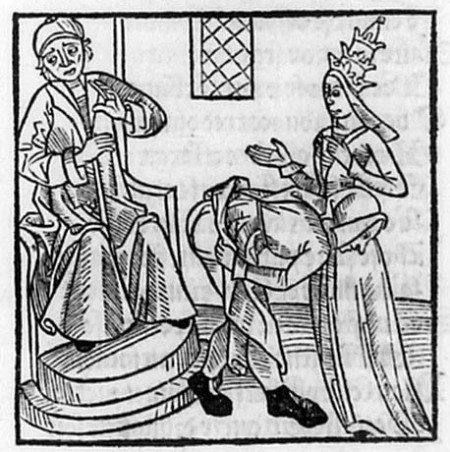 On the grounds of sex, he forbids women to make applications on behalf of others. There is a reason for this prohibition, to prevent them from involving themselves in the cases of other people contrary to the modesty in keeping with their sex and to prevent women from performing male duties. Its introduction goes back to a shameless women called Carfania who by brazenly making applications and annoying the magistrates gave rise to the edict.

Ancient Greco-Roman literature includes stories of dramatic female exposure. Queen Hecuba, attempting to dissuade her son Hector from fighting the mighty Achilles, bared her breast to him. Homer, Iliad 22.79-83.  Clytemnestra bared her breast to her son Orestes in a plea for him not to kill her in response to her murdering her husband and his father. Aeschylus, Choephori 896-9. When the courtesan Phryne was brought to trial on a capital charge in 4th-century-BGC Greece, she displayed her breast to win sympathy from the judges. Athenaeus, The Deipnosophists, Bk 13, Ch. 59-60. In roughly the same time and place, the Cynic philosopher Hipparchia remained unperturbed when an opponent attempted to pull up her cloak. Her husband, Crates of Thebes, had suddenly disrobed before her and her parents before they were married.

Men’s exposure of their buttocks to authorities tends to be judged more harshly. In thirteenth-century Italy, Salimbene described Albergo da Romano, a ruler of Treviso, as viciously brutal and thoroughly evil. Salimbene declared:

one day, after he lost his falcon when he was outside, he pulled down his pants and displayed his ass to God in a sign of insult and mockery. He believed that in doing this he avenged himself on God. Moreover, when he got home, he went and defecated on the church altar in the very place where the body of the Lord is consecrated.

Salimbene, Cronica, Latin from Holder-Egger (1905) p. 367, my English translation benefiting from that of Baird, Baglivi & Kane (1986)  pp. 368-9. Salimbene associating mooning God with defecating on the altar shows that mooning could be regarded as an insult of utmost seriousness.

Caia Afrania, the senator of Licinius Bucco’s wife, against whom a lawsuit was pending, always spoke for herself personally before the praetor, not because she did not have a lawyer, but because she had a lot of impudence. Thus, she kept bothering the courts with her barking, unusual in court, and she became a well known example of female pettifoggery, until the name of C. Afrania was used to refer to the crime of women with impudent habits. She lived until the end of the second consulate of Caius Caesar and Publius Servilius {48 BGC}: in fact, for such a monster it is the moment of her death rather than the moment of her birth that one has to remember.

From Latin trans. Rodger et al. (2013) p. 149. Caia Afrania is generally identified with the Carfania cited in the Ulpian Digest. Carfania’s self-representation versus the Ulpian Digest’s prohibition on women representing others is an unresolved interpretive issue addressed in various ways. Marshall (1989) p. 43-5. Licinius Bucco is not otherwise known. It seems to be ridiculing nickname. It has been translated as “Dummy” and “Fat-Face.” Id. p. 43, n. 23.

While women were formally barred under Roman law from representing others in court, women actively appealed to Roman courts. About a fifth of the responsa preserved in the Codex Justinianus and the Fragmenta Vaticana are replies to libelli that women submitted. Roman legal texts warn men officials about women’s legal calliditas (craftiness). Id. p. 48.

[4] Schwabenspiegel (Landrecht 245) “has her scolding the king and showing him her ‘hindere scham,’ i.e. her ‘rear pudenda.'” Nelson & Caviness (1998) in description of Heidelberg Sachsenspiegel (Heidelberg University Library, MS. cod. pal. ger. 164).  The Schwabenspiegel was written about 1275. Illustrated Sachsenspiegel created from about 1300 show the mooning. See “Group I: Women denied right to advocate or plead in court, Landrecht II,63,1,2” in id. In the German legal texts, the women’s name is written as Calpurnia or Calefurnia.

She assaults the view of her baseness and her sexual difference. She is seen to condemn herself. her quarrel produces not fame but infamy, and it taints every woman now and forever through the universalizing power of theory. … the law that protects the Law, so to speak, is the law of gender.

{Cafurne well dishonored herself,
More gossipy than a magpie,
since she didn’t plead wisely,
her decision was to show her ass.}

Le Fèvre’s self-created embellishment on the exemplum of a certain Carfania … “the picturesque detail of her mooning the judge” was invented by Le Fèvre.

Jehan Le Fèvre wrote Le Livre de Leesce as an original companion work to Les lamentations de Mathéolus. Le Livre de Leesce has been literally interpreted as a “defense of women.” Its treatment of Carfania, however, suggests that Le Fèvre wasn’t a narrow-minded, humorless gender ideologue. Carfania was criticized for excessive pleading.  Le Livre de Leesce concludes its lines on Carfania with an appeal to the example of a fourteenth-century French woman:

The daughter of Master Jehan Andrieu, who read the cases and the laws, got up one morning to show publicly in open audience through her great learning that woman is equal to man, and set forth many a good argument to guard the honor of women and protect them from blame. Her lecture lasted all day, almost until the dark of night. She put forth more than sixty reasons, and even, I believe, more than seventy, and she argued her case so well there that no man could refute it.

l. 1140-1154, from French trans. Burke (2013) p. 84. The daughter of Master Jehan Andrieu apparently pled in the long-winded, insistent manner attributed to Carfania. Jehan Andrieu was a famous professor of canon law at Bologna and Padua. His daughter Novella, born in 1312, reportedly followed her father in becoming a professor of canon law. She reportedly gave lectures while hidden behind a curtain so that students wouldn’t be distracted by her beauty. Id. p. 116, n. 167, Van Hamel (1892) v. 2, p. 241 (pdf page 807).

“Of Calpurnia will you speak
Who to the judge her arse exposed,”
said the other, full of cheek,
“And why no woman has since proposed
A pro, or a contra in court deposed?
If she’d speech pleasant, I don’t know.
But so badly her robe she closed
That her de profundis she did show.

[5] The text of Solomon and Marcolf makes clear Marcolf’s abasement:

Marcolf was lying bent over with his head downward and had pulled down his breeches, and his buttocks, asshole, penis, and testicles were revealed.

[6] Id. p. 237 reports that mooning is “rife in medieval literature as in folk literature.” Randall (1966) #528, 533-42, shows medieval images of mooning. Id. pp. 192-3 provides additional mooning manuscript citations. Most of the mooning figures are men. In Boccaccio’s Decameron VIII.5, three men protest against ignorant, corrupt judges by contriving to pull down a judge’s pants during a public court proceeding. Showing ass, in one way or another, is a transgressive means to protest injustice. The literature of men’s sexed protest, however, is barely recognized. Men’s protest against gynocentric society have been largely trivialized or ignored. Much more mooning by men arguably is warranted than exists in the historical record.