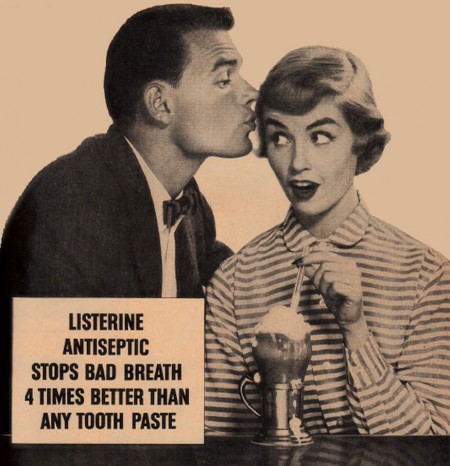 Even though love bears all things, bad breath can sour a close personal relationship. If you notice a friend or intimate hiding his face from you, consider three possibilities:

Many persons tend to assume the worst, meaning the third possibility. That’s a mistake. As awkward as it might be, you need to speak openly in your personal relationships. Simply say, “Do I have bad breath?” If the answer is yes, try to figure out why you have bad breath. Is it from something you have done, or have failed to do? Love is patient. Have hope that your bad breath will be cured and have faith that your friend or intimate will again turn his face to you.

In twelfth-century Latin literature, the story of Parius and Lausus instructs about the dangers of not speaking openly about bad breath in close personal relationships. Parius and Lausus were personal assistants to the Babylonian king Ninus. They were also close friends. Parius, however, began to envy Lausus. Parius’s envy grew so malicious that he plotted to murder Lausus. Driven by jealousy, Heracles’s wife had accidentally poisoned him with an envenomed robe of Nessus. Parius murdered Lausus by inducing him to wrap himself in sheets containing the poison of Nessus. Lausus died without perceiving his friend Parius breathing evil toward him.

King Ninus, who suspected nothing, then put Parius in charge of training Lausus’s son. The boy subsequently became the king’s favorite. That development infuriated Parius. He plotted to ruin the boy through a claim of bad breath.

Parius told the boy that he had bad breath. Parius explained that the king, not wishing to humiliate the boy, didn’t tell him about his putrid breath. Parius instructed the boy to take care to turn his face from the king when near him. The boy, mortified to learn of the stench he was bearing, subsequently changed his behavior drastically:

the boy never presumed to approach his lord if not summoned, carried out his service with bowed head, and did all his offices about the king with averted face. [1]

The king interpreted the boy’s strange new conduct to be a lingering effect of illness:

He bore with him long, and made no charge of malice or deceit, kindly putting the best interpretation on his conduct.

Parius scolded the boy whenever he came near the king. The boy became tearful and withdrawn. Parius positioned himself as the sole acceptable servant for the king.

The king was mystified by his favored boy’s new distance and personal diversion. The king questioned the boy about the matter. The boy, in shame, said nothing. The king privately confronted Parius and demanded to be told the truth. Parius pleaded:

Have pity on me, most merciful of kings, do not make me the accuser and cause of death to this boy whom I have brought up and loved with singular affection, as I loved his father. This matter I have kept from you, I confess, through my excessive love for him. If by some exercise of mercy his fault may meet with pardon, I have by my silence invited death, led astray partly by kindness to the boy, partly by my own simplicity. What my lord now compels me — weeping and reluctant as I am — to confess, I barely wrung from him through extreme insistence, and — though I know well he lied — he swore to me, against my certain knowledge, that in tending the king’s head and face he suffered great discomfort and he compared your breath (which undoubtedly in its excellent savour excels the fruits of summer or fresh balsam) to bilgewater. I die and deserve death as I speak the words. This is why he avoids my lord so despicably, why he turns away his face, bows his head, puts his hand before his mouth, and shuns speech with you.

Such are the intrigues of courtiers. The king believed Parius. Enraged, the king arranged to have the boy killed.

The death of the boy was to be a sensational public event. The king planned to have the boy killed as he rode forward to be honored with primacy over Babylon for one year. Parius, however, convinced the boy to transfer that honor to him. As Parius rode forward for the honor, an assassin stepped out and thrust a sword into his heart and killed him. The boy, horrified, threw himself on his dead foster-father’s body and wept.

The king realized that the wrong person had been killed. He summoned the boy for a private audience:

The boy, instructed by the dead Parius, knelt before him with bowed head, his hand on his mouth. The king’s anger rose afresh. Already inwardly designing another death for him, he said “Why do you put hour hand to your nose? How is it that to you alone I have become loathsome? Is the stench of my mouth so strong that you can come no nearer?” The boy said: “No, rather that of mine, lord, and I seek to save you from perceiving it.” The king: “Who told you of it?” The boy: “Parius told me, whom he loved as none else, that which all had kept from me, that the stench of my mouth was so evil that my presence was offensive to you. Therefore my hope of waiting upon you near at hand was cut off. Therefore is my hand always held before my breathing, that my foulness may not trouble you, or the calm purity of your serene countenance be tainted by my defect. And as a recompense for this warning and for all the other faithful care he had bestowed on me, he begged of me that honour which you had conferred on me, and he obtained it.

The king recognized that Parius had deceived and manipulated the boy. Parius with poetic justice had put himself before the sword. The king restored the boy to favor. He ordered that Parius’s corpse be hung on a gibbet for all to see and revile.

If someone is turning his face from you, speak up. Seek to understand the problem and correct it.

Your face, Lord, do I seek.
Do not hide your face from me.

Hear my prayer, O Lord;
let my cry come to you.
Do not hide your face from me
in the day of my distress.

Answer me quickly, O Lord;
my spirit fails.
Do not hide your face from me,
or I shall be like those who go down into the Pit. [2]

[1] De contrarietate Parii et Lausi (Of the variance between Parius and Lausus), in Walter Map, De nugis curialium, Dist. 3, c. 3, from Latin trans. James (1983) p. 255. Subsequent quotes, unless otherwise noted, are from this story, id. pp. 255-61. I’ve made some minor changes in the translation for readability.

Stories of misunderstanding about bad breath exist in historical literature from more than 2300 years ago. This specific bad-breath story occurs in the Anglo-Norman Gesta Romanorum as well as in other medieval story collections. See story 101 in Bright (2019). For references to other medieval story collections containing it, id. p. 661, source note to 101. For a more general review of instances of the motif, Lee (1909) pp. 232-5. The specific motif of bad breath doesn’t occur in the Decameron.

[image] Listerine Advertisement, from Redbook magazine, June 1956, Vol. 107, No. 2. Thanks to Classic Film on flickr.

Lee, A. Collingwood. 1909. The Decameron: its sources and analogues. London: David Nutt.