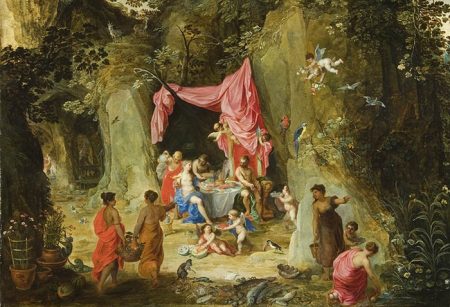 As Calypso’s captive on her island of Ogygia, Odysseus had an easy life, other than that gorgeous goddess regularly raping him. Calypso even promised to make Odysseus immortal. What person wouldn’t settle for captivity and sexual servitude for a life of ease and immortality with a goddess or god? Odysseus was unable to settle for Calypso because he had a home. No captivity — physical or psychological — can provide enough other benefits to stop a person from wanting to go home.

Odysseus understood that going home would be a painful ordeal. After Zeus ordered her to set Odysseus free, Calypso urged him to stay:

Do you really want to go home to your beloved country
right away? Now? Well, you still have my blessings.
But if you have any idea of all the pain
you’re destined to suffer before getting home,
you’d stay here with me, and be deathless.

Odysseus faced down Calypso’s deceptions and projections. He responded:

My heart aches for the day I return to my home.
If some god hits me hard as I sail the deep purple,
I’ll weather it like the sea-bitten veteran I am.
God knows I’ve suffered and had my share of sorrows
in war and at sea. I can take more if I have to.

While Calypso was strong enough to provision and run her household and her island, she wasn’t willing to participate actively in helping Odysseus to leave. She gave him an axe from her set of tools and led him to tall trees. Then she left. He worked alone to cut twenty trees. Calypso returned with an auger from her set of tools. She did nothing with the auger but hand it to Odysseus. He used it to build a raft. She gave him a large piece of cloth, but she did nothing to make it into a sail. Odysseus did all the work of sail-making, too. He did all the work in four days.

Calypso gave Odysseus farewell gifts that apparently memorialized to herself how much she loved him. After four days spent building a raft, on day five Odysseus was determined to leave:

Day five, and Calypso saw him off her island,
after she had bathed him and dressed him
in fragrant clothes. She filled up a skin
with wine that ran black, another large one
with water, and tucked into a duffel
a generous supply of hearty provisions.
And she put a breeze at his back, gentle and warm.

Odysseus probably would have preferred a strong wind to blow him away from Calypso as quickly as possible. Bathing and fragrant clothes are silly preparations for a long, tough raft journey. Wine is an unneeded temptation, but water and meat are useful. Whatever. Odysseus rejoiced as soon as he was out at sea.

Eighteen days into sailing, Odysseus on his raft encountered a massive storm that the sea-god Poseidon had whipped up against him. A huge wave crashed down on the raft and swept off Odysseus:

He was under a long time, unable to surface
from the heaving swell of the monstrous wave,
weighed down by the clothes Calypso had given him.
At last he came up, spitting out saltwater,
seabrine gurgling from his nostrils and mouth.

He managed to grab hold of his raft and climb back on. The oppressive clothes of his rapist Calypso still weighed him down on the raft that he had made with her materials. But his main burden was psychological. He desperately lacked compassion for his suffering.

Odysseus was merely one more man raped and lost at sea. Then the unbelievable happened:

And the White Goddess saw him, Cadmus’s daughter
Ino, once a human girl with slim, beautiful ankles.
She had won divine honors in the saltwater gulfs.
She pitied Odysseus his wandering, his pain,
and rose from the water like a flashing gull,
perched on his raft, and said this to him:
“Poor man. Why are so odious to Poseidon,
Odysseus, that he sows all this grief for you?
But he’ll not destroy you, for all of his fury.
Now do as I say — you’re in no way to refuse:
take off those clothes and abandon your raft
to the winds’ will. Swim for your life
to the Phaeacians’ land, your destined safe harbor.
Here, wrap this veil tightly around your chest.
It’s immortally charmed: fear no harm or death.
But when with your hands you touch solid land,
untie it and throw it into the deep blue sea,
clear of the shore so that it can come back to me.”

Odysseus was naturally wary of another goddess dominating him and telling him what to do. He feared that she too was scheming against him. Many men suffering under gynocentrism have such wounds. Odysseus decided to stay on his raft for as long as he could and swim only when necessary. He didn’t understand that he was still in Calypso’s clothes and still on her raft. He didn’t understand what was necessary for him to be free of her and for him to again feel joy in his wonderful masculinity.

Poisidon raised up a great wave and sent it crashing down on Odysseus. The effect was liberating:

So the long beams of Odysseus’s raft were scattered.
He went with one beam and rode it like a stallion,
stripping off the clothes Calypso had given him
and wrapping the White Goddess’s veil round his chest.
Then he dove into the sea and started to swim
a vigorous breaststroke.

Now he was truly free of Calypso. Now he was thrilled to be naked below the waist and to feel long, stiff wood in his hands. He breast-stroked with a joy he had never felt under Calypso’s captivity.

With the help of Athena, another goddess showing love for men, Odysseus eventually reached the soft sand of a river bed. He threw back Ino’s life-saving veil to her in the deep sea. He kissed the good earth. Then he climbed up from the riverbank into the woods. Two olive trees — one wild, one planted — were there like young, different-natured spouses grown into ripe old age together. This was the sort of bed Odysseus sought:

Proof against blasts of the wild, wet wind,
the sun unable to needle light through,
impervious to rain, so thickly they grew
into one tangle of shadows. Odysseus burrowed
under their branches and scraped out a bed.
He found a mass of leaves there, enough to keep warm
two or three men on the worst winter day.
The sight of those leaves was a joy to Odysseus,
and the godlike survivor lay down in their midst
and covered himself up.

The man-pitying goddess Athena sprinkled his eyes with sleep. Odysseus through the horrific storm had finally left behind his rapist Calypso. Buried in the leaves under the two entangled olive trees, Odysseus experienced a foretaste of being home.

The Odyssey is too significant to continue to be read and taught with little regard for men’s real sufferings. Read the Odyssey well!

Discussion of Odysseus and Calypso almost always obscure, euphemize, or present as enjoyable Calypso’s raping of Odysseus. Odysseus’s struggle to be free from his horrific experience with Calypso is scarcely recognized. Yet it is there for all to see in a text that has been widely disseminated and studied for more than 2300 years. If Odysseus’s experience with Calypso is truly recognized, it surely resonates with men’s experiences.

The great second-century parodist Lucian of Samosata recognized that the crime of a woman raping a man is scarcely credible. Lucian thus contrived the falsehood that Odysseus regretted leaving Calypso. Explicitly telling lies, Lucian declared that when Odysseus and Penelope had become immortals in the Isle of the Blessed, Odysseus without Penelope’s knowledge wrote a letter to Calypso. In that letter, Odysseus declared:

Now I am on the Isle of the Blessed, thoroughly sorry to have given up my life with you and the immortality which you offered me. Therefore, if I get a chance, I shall run away and come to you.