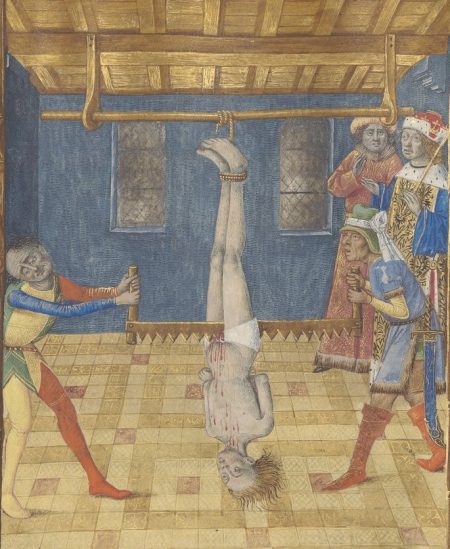 Contrary to widely propagated lies, men suffer terribly from intimate-partner violence. Both old, fat men and young, handsome men are victimized. What domestic-violence experts teach to women also applies to men. No man is safe from those who claim to love him.

Consider the case of Enguerrand I de Boves. He was born in France in the middle of the eleventh century. Enguerrand married Ade de Marle. She had previously been married to Aubry, Viscount of Coucy.[1] Enguerrand’s marriage to Ade de Marle made him Lord of Marle. Ade had two children, Thomas and Robert, within her marriage to Enguerrand. He apparently suspected that at least Thomas (his “reputed {ut dicitur}” son) wasn’t his biological child. Enguerrand divorced Ade, most plausibly for betraying his reproductive interests despite professing to love him.[2]

Although Enguerrand showed more backbone toward Ade than many men show toward their wives, Enguerrand typically allowed women to dominate him. Guibert of Nogent noted of Enguerrand:

He was so much devoted to women’s love that, whatever women surrounded him, whether they were indebted to him in love or money-seeking women, he would do almost nothing but what their impudence dictated.

After Enguerrand divorced Ade, he became enamored of Sibylle de Porcien. She was Count Godfrey’s wife. Godfrey was a very handsome man and much younger than Enguerrand. However, Godfrey and Sibylle were having marital problems, and Sibylle was a woman with strong, independent sexuality:

Her husband was fulfilling his martial duty less than she would have desired. Whether she kept herself from other men can be know from this one thing: she would have never come to such a public and monstrous scandal if she had not descended one step at a time through clandestine evil acts. In particular, she was already pregnant with another man’s child when she married the man who is now her husband. Her past debaucheries everyone knows.

Enguerrand and Sibylle had a secret affair. She then left her husband and married Enguerrand. Both her former husband Count Godfrey and her father, Roger, Count of Porcien, were furious with Enguerrand for what he had done. Both sides killed many men in the resulting violence against men.

Enguerrand subsequently had to make a humiliating sacrifice for his wife Sibylle. As Enguerrand became old and put on weight, his social status declined:

He was ridiculed by tavern-keepers and butchers for getting old and fat — many pounds with many years.

In light of these personal developments, his wife Sibylle took decisive action:

His wife, with the pretense of chastity but really because of his age and fatness, began to refuse to have sex with Enguerrand. She, however, would not be deprived of her customary enjoyment of lovers. So she began to lust for a suitable young man.

What could an old, fat, sexually desperate husband do in this situation? Some might say he should divorce his wife and find a new one, or at least find an eager girlfriend. But Enguerrand had already been divorced once. Real-world divorce is expensive in a variety of ways. After Enguerrand’s divorce from Ade, Thomas de Marle, Enguerrand’s reputed son with Ade, hated him and violently attacked him and his allies. Divorce often promotes family violence.

Rather than divorcing Sibylle, Enguerrand resolved that sharing is better than lacking. He apparently accommodated Sibylle’s desire in order to be allowed to have sex with her:

Enguerrand kept her away from all communication with the young man, until she drove Enguerrand so mad with sexual enticements that he summoned the young man, set him up in their house, and betrothed her very young daughter to him to conceal the young man’s wicked affair with Enguerrand’s own wife.

Husbands historically have shared their wife with other men when the wife was reluctant to work outside the home. But for good evolutionary-biological reasons (powerfully re-enforced by gynocentric paternity laws) men typically prefer that, for a woman with whom they hope to have children, she exclusively have sex with him. Enguerrand sacrificed an exclusive arrangement with his wife in order to avoid the harm and violence of divorce.

Even young men are forced to offer sacrifices because of intimate-partner violence. Consider a situation of complicated intimate partnerships and violence in ancient Rome. The gladiator Encolpius apparently became a sexual consort for the wealthy married merchant Lichas, and perhaps also had sex with Lichas’s wife. The wealthy, highly privileged woman Tryphaena owned both Encolpius and a sixteen-year-old servant youth named Giton. Encolpius and Giton had a consensual sexual relationship. Exploiting her position of power and authority over Giton, Tryphaena frequently sexually assaulted him. Encolpius and Giton fled from Tryphaena’s household and thus became runaway slaves. Tryphaena was enraged by the loss of her beloved chattel and her sexual privilege. Lichas was enraged that Encolpius had deserted him to be with Giton. The grave risks of further intimate-partner violence are obvious.

Tryphaena, Lichas, Encolpius, and Giton found themselves unexpectedly together on a ship at sea. With Tryphaena keen to sexually assault Giton, Encolpius courageously defended the youth:

Thrusting my fists into Tryphaena’s face, I cried out in a clear and free voice that I would use violence if that wicked woman didn’t abstain from hurting Giton, for she was the only person on the ship who deserved a beating.

A brawl subsequently broke out. Tryphaena, her maids, Lichas, and other subservient men were on her side; Encolpius, Giton, Eumolpus, and Eumolpius’s servant-man fought against them. Blood streamed from wounds on both sides, yet the intimate-partner violence raged undiminished. Then Giton dramatically offered a horrific sacrifice:

Then the supremely brave Giton put a razor to his own manly genitals and threatened to excise the cause of all the misery.

Tryphaena quickly responded with an offer of forgiveness for all past offenses. The warring parties then established a formal peace treaty. Lichas was compelled not to disparage Encolpius about his relationship with Giton:

Lichas, you express your understanding that you will not pursue Encolpius with insulting words or grimaces, nor inquire where he sleeps at night. If you do so inquire, you will pay him two hundred denarii for each injurious act.

Tryphaena was compelled not to sexually harass Giton without pay:

You will give the youth no repugnant demand for a hug, a kiss, or to be held tight in sexual intercourse, without for each act paying a hundred denarii.

A woman paying a subordinate for sexual services that she demands is more just than her receiving those services for free. In our more ignorant and barbaric age, women who raped men can receive state-mandated monthly payments from their victims. While the treaty that ended this intimate-partner violence was far from perfect, at least it established peace.

Cuckolding and castration culture cast a long, dark shadow over human history. Men too often have been called upon to make enormous sacrifices to stop intimate-partner violence. Women must take equal responsibility for stopping intimate-partner violence. But that’s not enough. Establishing a propitious environment for human love is the most important task for everyone.

But count Stephen, with certain bishops of our kingdom, among whom were Hugh of Soissons, William of Paris, fine, noble men, who were splendid, accomplished young rulers, and Enguerrand of Laon — would that he had been as preeminent in his religious belief as he was in appearance and eloquence — together with many dignitaries of all ranks, entered the city of Constantinople.

He {Enguerrand} divorced Adèle of Roucy, the mother of Thomas of Marle, on charges of adultery, leading Guibert to say throughout this work {Monodiae} that Thomas was Enguerrand’s “reputed” son.

Guibert is not casting doubt on Thomas’s legitimacy, or casting aspersions on Enguerrand’s first marriage to Ade de Marle, Thomas’s mother, when he states: “contra Thomam, quem irremediabiliter ipse, qui dicebatur pater, oderat {against Thomas, who irremediably hated that one who is called his father}.” He is showing, rather, how unnatural Enguerrand’s sentiments have become toward Thomas de Marle, whom both he and he second wife, Sibylle, intend to disinherit.

[4] Guibert, Monodiae 3.14. Enguerrand was a lord and a count. Being ridiculed by inn-keepers and butchers is a stunning status reversal. The Latin text refers wittily to the “weight of his age {gravitas aevi}”; gravitas, used here ironically, is a venerable Roman virtue.

[5] Guibert, Monodiae 3.11. The subsequent quote above is from id. While less so in medieval Europe than in today’s high-income countries, marriage turning sexless has always been a risk.

[6] Petronius, Satyricon 108, Latin text from Heseltine & Rouse (1913), my English translation benefiting from that of id. and Walsh (1996). All subsequent quotes from the Satyricon are similarly source. The next quote above is also from Satyricon 108.

[7] Petronius, Satyricon 109. The subsequent quote above is from id. The denarius was an ancient Roman silver coin.

Payments of 200 and 100 denarii were enormous sums relative to the income of ordinary Roman men. The Satyricon is thought to have been written about 64 GC. Toward the end of the first century GC, men engaged in unskilled agricultural labor on estates in Roman Egypt earned roughly 5 obols per day. A denarius was worth 28 obols. Hence the daily wage for men engaged in unskilled labor was about 0.2 denarii a day. For the equivalence and data, Harper (2016) Table 2, p. 814, and Figure 9, p. 828. Here’s Harper’s extensive dataset on Roman prices and wages.

Levine, Robert. 1997. The Deeds of God through the Franks: a translation of Guibert de Nogent’s Gesta Dei per Francos. Woodbridge: Boydell Press.