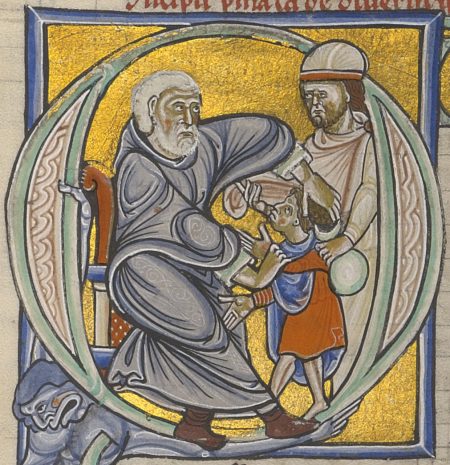 With cuckolding of men institutionalized in paternity law, many men today passively accept being cuckolded. What is a man to do? Medieval literature describes pathetically stupid cuckolds. Yet even vigorous and shrewd men during the relatively enlightened medieval period had difficulty resisting cuckolding.

In France in the 1130s, the great philosopher Peter Abelard counseled his son Astralabe about the complexities of cuckolding. A husband guarding his wife cannot overturn the ontology of chastity and sinfulness:

Avoid guarding an unchaste woman, and similarly for a chaste one;
surely for the latter that isn’t needed, and it isn’t possible for the former.
What does the guardianship of an unchaste woman achieve? You cannot be made to believe that she who remains no less sinful is pure.
Virtue surely must be thought a matter of the mind, not of the body;
no one is made good by force, but rather thus more sinful.

A false accusation can make a truthful woman realize truth:

With whom you accuse her, you compel a woman to love,
and often you manufacture a true charge from a false one.

For a woman who cares nothing for truth or her sexual reputation, a false accusation merely provides her with an idea for action:

she who in no way truly fears injuries to her reputation
is impelled from a false accusation to a true crime.

Just as men refuse to recognize the reality of gynocentrism, they don’t want to hear that they’re being cuckolded:

I don’t want you to teach a husband about the sin of his beloved wife;
what is known, rather than what was done, weighs him down:
no one willingly gives ear to his own disgrace;
he will want neither you nor anyone else to know such things.

Even in the relatively enlightened medieval period, men were allowed to enjoy blissful ignorance for as long as time and paternity law allowed.

Ordinary men in the ancient world sometimes harshly punished men who cuckolded them. For example, in the first-century Roman Empire, Glyco’s steward was caught in the act of having sex with Glyco’s wife. Glyco in response condemned his steward to the beasts in the gladiators’ arena. Glyco apparently didn’t punish his wife. The clothes dealer Echion recounted:

A wooden-nickel man like that Glyco goes throwing his steward to the beasts. He might as well expose himself to them. What sin did that steward commit, when he was forced to push his dick in? That piss-pot of a wife deserves to be tossed by a bull. But if you can’t beat the donkey, beat the saddle.

Expressing gynocentric ideology internalized even among freed Roman slaves, Echion blamed the father of Glyco’s wife for her infidelity:

How could Glyco ever have thought that the stinkweed that Hermogenes sowed would turn out decent? That guy Hermogenes is so greedy he could cut the claws off a hawk in flight. An apple doesn’t fall far from the tree, yea, vipers like him don’t hatch lengths of rope.

Glyco putting his steward to death for cuckolding him did little to repair the injury to him:

It’s Glyco, poor Glyco, who has paid the price. As long as he lives, he’ll be branded. Only death will wipe away his shame.

Men are highly vulnerable to women hurting them. That goes as deep as the biological reality of gender inequality in parental knowledge. Women know for certain who their biological children are. Men, without modern DNA testing, are always at risk of being cuckolded.

Even the great twelfth-century philosopher Peter Abelard couldn’t offer his son Astralabe definitive wisdom to resolve the problem of men being cuckolded. A well-known medieval proverb advised men: “if you can’t be chaste, at least be careful {si non caste, tamen caute}.” Today with tyrannical criminalization of men expressing sexual interest in women, grotesquely unjust laws such as the “four seas” paternity doctrine and acute anti-men discrimination in child-custody and child-support rulings, men must be more careful in relating to women than they were in relatively humane ancient and medieval times.

Abelard underscores his ontological point by repeating it:

You strive in vain to guard an unchaste woman or a chaste woman:
the first you cannot guard, and for the other, you know there is no need.

Guarding a pretty girl, you brute, gets nowhere;
A girl’s good morals are the guard you need.
A girl who doesn’t since she mustn’t, does it;
A girl who’s chaste unforced is chaste indeed.
The body you may guard — the mind is guilty;
No means of guarding a girl’s thoughts from sin.
Nor can you guard the body, all doors bolted;
Bolt as you will, a lover lurks within.

[2] Ovid, the great medieval authority on love, also taught about husbands’ unwillingness to hear about being cuckolded:

No husband ever welcomes accusations,
Believe me; no one’s pleased to hear the bad.
If he’s lukewarm, your scandal won’t disturb him,
Or, should he love, your service makes him sad.
A lapse is hard to prove, though clear as daylight;
The girl’s safe in her biased judge’s eye.
He’ll not trust what he’s seen, if she denies it;
He’ll blame his sight and give himself the lie.

[3] Petronius, Satyricon 45, Latin text from Heseltine & Rouse (1913), English translation from Walsh (1996), adapted with the benefit Heseltine & Rouse (2013) and the notes of Schmeling (2011). All subsequent quotes from the Satyricon are similarly sourced and are from this section of the text. As a slave, Trimalchio himself cuckolded his master and was sent off to the countryside for that offense. Satyricon 69.3 and 75.11.

[image] Man making a large payment to an abbot to place a young boy in his monastery. A husband might take such action with respect to a child that resulted from him being cuckolded. The text concerns simony, and begins, “A certain man having a son offers him {Quidam habens filium obtulit eum}….” Decorated initial Q on folio 63 in a manuscript of Gratian’s Decretals made in the 1170s, probably in northern France. Held in J. Paul Getty Museum, Los Angeles, Ms. Ludwig XIV 2.

One thought on “now-unspeakable wrong: resisting cuckolding in medieval Europe”