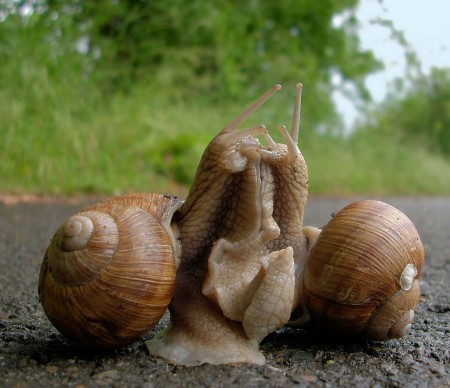 Friends, listen to me
Two words or three,
And harken to my song;
And I shall tell you a tale,
How ten wives sat at the pale,
And no man was them among.

Since we have no other song
For us to sing among,
Tales let us tell
Of our husbands’ ware,
Which of them most worthy are
Today to take the bell.

And I shall now begin with mine:
I know the span well and fine,
The length of a snail,
And ever worse he’s from day to day.
To great God ever I pray
To storm him with evil hail.

The second wife sat her near,
And said, “By the Cross, I have a ware
That is too so mini:
I span him in the morningtide,
When he was in his greatest pride,
The length of three pennies.

How should I be served with that?
I wish Gybbe, our gray cat,
Would pounce that tiny stick!
By Saint Peter all of Rome,
I’ve never seen a worse dick
Standing ready to prick.”

The third wife was full of woes,
And said that, “I have one of those
That’s nothing when I need;
Our man’s britches, when it’s torn,
His penis peepeth out forlorn
Like a legless centipede:

It dangles all within the hair:
Such a one I never ere,
Mounted up in the crotch-pair.
Yet the rascal is hoodless,
And of all things, useless!
Therein Christ give him care!”

The fourth wife of the flock
Said, “Our man’s piddlecock
Happily would I trade ’em in:
He is long, and he is small,
And also has the drooping pall;
God gave him no strength within!

The smallest finger on my hand
Is more than he, when he does stand:
Alas that I am unshaken!
Sadly mounting there to be slaken!
He should’ve been a woman
Had he been ever born.”

The fifth wife was full of joy
When she heard her fellow’s annoy,
And up she stood straight:
“Now you speak of a cock!
In all the world there’s no more to mock
Than has my bed mate.

Our man wanks like a fleeing deer,
He empties his cock once a year,
Just as does a buck:
When men speak of archery,
He must stand up close to me,
Or else his shot fails to fuck.”

The sixth wife’s named Sar;
She said: “My husband’s ware
Is of good size;
He is white as any milk,
He is soft as any silk,
Yet surely he will not rise.

I squeeze him up with my hand,
And pray to him that he will stand,
And yet he lies still.
When I see that all is naught,
I think many an angry thought;
Only Christ knows my will.”

The seventh wife sat on the bench,
And she cast her legs awrench,
And bade fill her wine:
“By Saint James of Gales,
In England and in Wales
There isn’t worse than mine!

When our man comes in,
And looks after that sorry pin
That should hang between his legs,
He is like, by the Cross,
A sorry lark brooding in moss
Upon two addled eggs.”

The eighth wife well knew ways of mates,
And said, “Seldom am I sate,
And so from many years I well say:
When the frost starts to act,
Our man’s cock contracts
And always goes away.

When the cuckoo begins to sing
Then the rascal begins to spring,
Like a bumblebee;
It cowers upon his balls,
I know not the worst of all,
I curse them all three!”

The ninth wife sat them near,
And held a span up on high
The length of a foot:
“Here is a penis of fair length,
But he bears a sorry strength —
God do him good —

I bow him, I bend him,
I stroke him, I wend him;
The devil him innerve!
Be he hot, be he cold,
Though I’ve torn him twofold,
Yet he will not serve.”

The tenth wife began her tale,
And said, “I have one of the small,
One that was winnowed away.
Of all naughts it is naught:
Clearly, it wouldn’t be bought,
He is not worth a nay.”

The medieval wives’ talk occurs in a tavern. In line 5, I’ve used pale for nale (Middle English for tavern) to sustain the rhyme.  According to the poem’s most recent editor, the poem “offers a glimpse into feminine discourses on marital sex.” She describes the poem as “a venue for married women to identify with what must have been very real frustrations.”[2] The poem can thus be understood as an analogue of literature of men’s sexed protest. Benighted by the oppressive ideology of courtly love, men even today tend not to recognize the bawdiness of women’s talk among themselves.

The poem has attracted little scholarly attention. One medieval literature professor recently explained that the poem intrigued her as a nineteen-year old woman. She declared that the poem is “tinged with misogyny that was ripe for critique.” She explained:

it gives us a gaggle of ten women, who become bored and decide to compare and ridicule their husbands. In turn, they make fun of their husbands’ endowment, their sexual performance and their general inadequacy.

In modern literary criticism, misogyny, like patriarchy, covers everything.

The poem is highly repetitive. Its most creative aspect is the different figures the medieval wives use to disparage their husbands’ penises. That disparagement doesn’t reach the extreme of literal castration. Lines 7-10 indicate that the wives complain about their husbands because they know no other songs.

[1] A glossed version of A Talk of Ten Wives on Their Husbands’ Ware is available online in Salisbury (2002). Its manuscript source is Porkington MS, no. 10 (National Library of Wales at Aberystwyth; now called Brogynton MS II.1), fols. 56v-59v (1453-1500). The lines in that edition are mis-numbered after 68. To maintain common line numbers, the above poem include two lines numbered 68.