Violence against men tends to be associated with men’s natural sexual rivalry for women.  In Decameron IV.4, Gerbino attacked a Saracen ship to capture his beloved, the daughter of the King of Tunis.  She was being conveyed to marriage with the King of Granada.  Many of Gerbino’s men and many of the men in the other ship were killed.  After the Saracens’ killed the woman rather than be forced to give her up, Gerbino, acting the part of the courtly hero, climbed onto the enemy ship:

Just like a starving lion who falls upon a herd of bullocks, slashing this one with his teeth and that one with his claws, intent on satisfying his anger rather than his hunger, so Gerbino, sword in hand, cut down one Saracen and then another, slaughtering a host of them without mercy. [1]

Gerbino’s grandfather, the King of Sicily, subsequently had Gerbino beheaded for attacking the ship in violation of his promise of safe passage.  The “gallant” Gerbino had an “exalted reputation for courtesy and valor.”  He caused many men to be slaughtered.  The same literary pattern occurs in Decameron V.1 when Cimone is transformed into a courtly lover:

like a ferocious lion, he fell upon his enemies {men} in an amazing display of force, and sword in hand, struck them down one after the other, slaughtering them like so many sheep. [2]

Boccaccio justly had contempt for the idiocy of men acting the script of courtly lovers.  Decameron II.7, understood more than superficially as the story of Alatiel, makes clear Boccaccio’s concern for the reality of men’s deaths in sexual rivalry.  Sexual rivalry among men is natural.  But the extent of slaughter of men it produces depends on specific social conventions and circumstances. 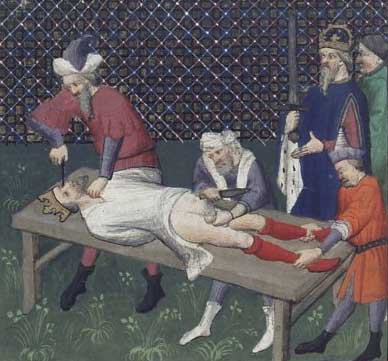 Before Calandrino could get up, Monna Tessa ran at him with her nails and clawed him all over this face.  Then she seized him by the hair and started dragging him up and down. “You damned filthy dog, you!” she said to him.  “So this is how you treat me?  You old fool ….”  {Calandrino} did not have the courage to do anything to defend himself against her.  But later, all scratched and scraped and disheveled, he gathered his cloak, got to his feet, and began humbly begging her not to shout, unless she wanted to see him all cut up into little pieces, because the woman who had been with him was the wife of the master of the house. [3]

Engaging in physical violence against other men as a heroic courtly lover was largely an elite ideal.  Like punishing men for consensual sex in the U.S. today, punishing men for illicit sex was in Boccaccio’s Florence much more significant in the lives of ordinary men.

Boccaccio makes clear that women are agents, both socially and individually, for violence against men.  In Decameron VII.4, Monna Ghita encouraged her husband Tofano’s abuse of alcohol in order to enable her to have an affair.  When Tofano caught on to his wife behavior and locked her out of the house, she trumped his trick and contrived to have her family beat him:

they grabbed Tofano and beat him until he was completely covered with bruises.  Then they went into the house, gathered up all the lady’s belongings, and took her back home with them, threatening Tofano with even worse to come. … Tofano, who was really very fond of his wife, got some friends to act as intermediaries, and thanks to them he managed to make peace and arranged for her to come back home.  And not only did he promise her that he would never be jealous again, but what is more, he gave her permission to do whatever she liked, as long as she was so discreet that he never found out anything about it. [4]

In Decameron VII.7, Madonna Beatrice encouraged her lover to give her husband Egano a beating:

“Sweet lips,” she said. “I want you to get yourself a stout stick and go down to the garden.  Then, pretending that you’d asked me to go there in order to test me, I want you to heap abuse on Egano just as if you thought you were talking to me, and after that, I want you to play a nice tune on him with your stick for me.  Just think of the amazing pleasure and delight we’ll get out of that!” [5]

Madonna Beatrice’s lover carried out her request and beat Egano “black and blue” with a stick.  Women’s dominance over men allows them to persuade men to carry out violence against other men.

Boccaccio challenges readers to reject trivialization of violence against men.  In Decameron VIII.9, Master Simone wanted to join Bruno and Buffalmacco’s company of privateers.  As part of a mock initiation ritual, they threw him into a ditch filled with feces.  Such light-hearted violence against men is now associated with fraternity hazing rituals.  Decameron II.1, however, indicates the broad social base for violence against men.  Martinello pretended to be crippled in order to mock popular veneration of a saint’s body.  An onlooker recognized the ruse and alerted the crowd:

the grabbed him {Martinello} and dragged him down from where he has standing.  Holding him by the hair, they tore all the clothes off his back and started punching and kicking him.  … although he did his best to defend himself, it was no use, and the crowd on top of him just kept getting bigger and bigger. [6]

In Decameron IX.8, Messer Filippo falsely believed that Biondello had made fun of him:

he smashed in Biondello’s face with his fists, which seemed to made out of iron, and did not leave a single hair on his head in place.  Then he rolled him over in the mud and ripped all the clothes he had on to shreds, applying himself to all these tasks with such zeal that after Biondello’s first utterance, he was unable to say another thing, let alone ask Messer Filippo why he was doing all this to him. [7]

Messer Filippo perceived an insult in nonsense words that he didn’t understand.  Ciacco had set Biondello up for this beating in revenge for Biondello setting him up for a disappointing dinner.  That incredible disproportion represents the trivialization of violence against men.