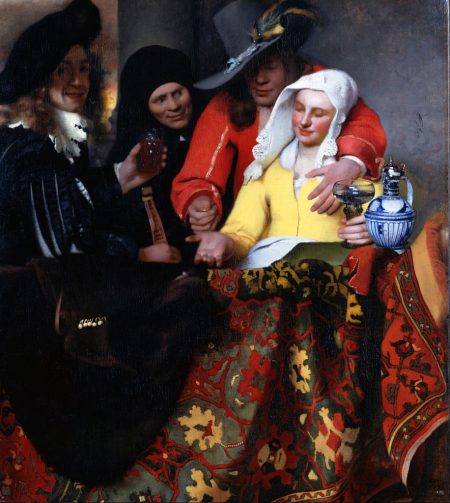 Men have traditionally been confined to the gender role of working away from home to earn resources for women and children. Many men want to escape from this oppressive gender role, but what are the alternatives? Is it possible for a man to marry, yet not be forced into the role of obligatory wage-worker outside the home? Ancient and medieval literature shows possibilities for non-traditional marital partnerships.

Under the Roman Empire, most men lived in difficult circumstances, as have most men throughout history. The Roman Emperor Augustus enacted laws that pressured men into marriage. Moreover, Augustus established the lex Iulia de adulteriis coercendis {law of Julius restraining adultery}. Throughout history, punishment for adultery has been gender-biased against men. The lex Iulia de adulteriis coercendis apparently was less gender-biased against men than earlier adultery laws. However, sources on the lex Iulia de adulteriis coercendis are fragmentary, specific provisions showing clear punishment bias against men are well-attested, and law in action is commonly more biased against men than formal law is.[1] Even thought they weren’t subject to eighteen years or more of compulsory, monthly sex payments for doing nothing more than having consensual sex of reproductive type, men’s sexuality was considerably constrained under the Roman Empire.

Living within the Roman Empire, Zoilus shrewdly established a non-traditional marital partnership. He was a man who actively enjoyed being sexual penetrated by another man. To avoid penalties imposed on men who remained unmarried, and because men at this time weren’t allowed to marry other men, Zoilus married a career woman. Specifically, he married a woman pursuing a career of prostituting herself. Zoilus similarly pursued a career of prostituting himself. Zoilus and his wife thus lived today’s ideal of gender-egalitarian marriage.

Anti-men bias in punishing adulterers benefited Zoilus as well as his wife. An epigram disparaging Zoilus recognized his shrewdness:

Zoilus, you half-man / half-woman, you have married an adulteress.
Oh, how much profit will you two make at home,
when he who grinds you pays your wife the penalty, and her adulterer pays you.
How much will those men caught in the act be fined for their immodesty!

But lust, which now seems profitable to you,
will soon causes expenses when you unexpectedly become old,
for adulterers will soon charge you for their work;
only your procuring youth now keeps them generous.

When an old man self-identifies as a young, alluring man, others often don’t respect his identity. No human-made law requires anyone to respect the old man’s new self-identity. Hellenistic epigrams sang of the sexual allure of old women, but those epigrams probably did that only for their paying customers. The unpleasant truth is this: old men and old women are less sexually desirable on the open market than are young men and young women. A marital partnership in the business of sex, as Zoilus and his wife’s was, will be most successful when both partners are young. Such a marriage can easily go bankrupt with age.

Men stuck in a dishonorable job can benefit from marrying a career woman. In the fifteenth century, the great medieval church official Poggio Bracciolini recounted:

In Avignon, a French notary, well known among church officials, was captivated with love for a common prostitute. He gave up his notary practice and lived by the profits of her prostitution. On the first day of January, he put on new clothes and wrote on his sleeves in French in silver letters: “from good to better.” He regarded being a pimp as more honorable than his previous profession.

Avignon in the fourteenth century was at the center of intrigues among leading church officials. The notary in seeking to make a living probably attested to written deeds that were fake or misleading. His wife, in contrast, provided actual, well-understood deeds for her customers. Historically, marketing assistants for female prostitutes have been predominately women, usually old women. The notary courageously took up a position in a female-dominated profession. His marital partnership allowed him to retire from his dishonorable profession and have a higher standard of living through sharing in his wife’s earnings as a prostitute. That’s an advantageous marriage for a man.

Men must be shrewd and innovative to make the most of their lives under gynocentrism. Traditional marital partnerships usually serve women’s interests. Men should value their own lives equally to those of women and explore non-traditional options for their lives.

[1] During the Roman Republic, adultery was less often punished, but punishment was more biased against men:

Dixon (2012) pp. 87-8. The lex Iulia de adulteriis coercendis heightened regulation of adultery, but retained a variety of anti-men biases in punishment. A man convicted of adultery lost half of his property, while a woman convicted of adultery lost only a third of her property. Id. p. 62. If a husband caught his wife engaging in adultery with a low-status man, he could kill that man, but not his wife. Id. p. 65. If an adulteress remarried, the adulterer had to be prosecuted before she was prosecuted, and if he wasn’t convicted, she couldn’t be. Id. p. 50. The time limit for bringing a charge against an adulterer was five years, while the time limit for bringing a charge against an adulteress was six months. Id. p. 53. Dixon observed:

There is no suggestion within the sources as to why there was such difference between the time allowed for accusations against the adulterer and the adulteress.

Id. Criminal law, particularly the crime of seduction, has always been gender-biased against men. That’s not explained because it’s been accepted without questioning as natural and appropriate.

[2] Ausonius, Epigrams 101 (94 EW), Latin text from Green (1991) (with my changes to editorial punctuation and capitalization), my English translation benefiting from that of Evelyn-White (1919) v. 2, p. 209. Evelyn-White records the title of the epigram, which is ancient but probably not from Ausonius, as “To Zoilus, who had married an adulteress {Ad Zoilum qui uxorem moecham duxerat}.” Green noted that Zoilus appears in the Greek Anthology (11.82, 12.76) and in Martial (2.16). The subsequent quote is the second half of the full epigram.

[3] Poggio Bracciolini, Facetiae 189, “About a pimp who had been a notary {De lenone facto ex notario},” Latin text from Poggio (1879) vol. 2, pp. 106-7, my English translation. Latin was the language within the Roman Curia where the notary worked. Having vernacular text written on his sleeves emphasizes his turn to a popular profession. A notary is different from an actuary, who is a person who lacked sufficient personality to become an accountant.