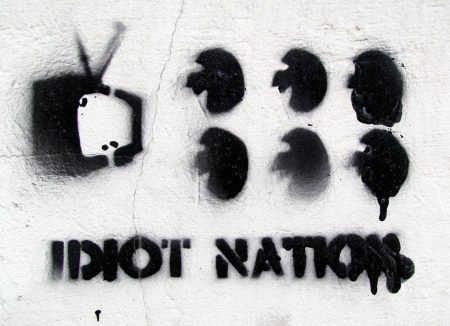 Enlightened medieval thinkers didn’t teach men to just listen and believe. They instructed men to question and investigate. That’s how objective knowledge is generated. Men who questioned and investigated created almost all the machinery of modern civilization. Men who just listened and believed, in contrast, often produced nothing and became cuckolds.

Consider the case of a husband in a small, remote town in Italy early in the fifteenth century. He caught his wife in the act of having sex with another man. Probably drawing upon experiential knowledge passed down across generations of women, she responded strongly and decisively to being exposed as an adulteress:

she instantly pretended to be half-dead and threw herself onto the ground, as if she were dead.

Most persons don’t die by instantly throwing themselves on the ground and pretending to be half-dead. The husband should have carefully and fully investigated his wife’s apparent death. Instead, the husband merely looked and believed:

The husband came to her, and believing that she was dead, began to weep and rub his wife’s arms.

Most husbands deeply and truly love their wives. But if a husband sees his wife fall dead after he sees her having sex with another man, questions should arise in his mind. With her husband weeping and rubbing her arms, the wife with stone-cold composure played out her ruse:

She then partially opened her eyes, as if she were gradually regaining consciousness. When her husband asked what had happened, she said she had been struck by too much fear.

Too much fear, indeed. She had no reason to fear her husband:

When the fool began to console her and to beg her to command whatever she wanted, she said, “I want you to swear that you saw nothing.” As soon as he had so sworn, his wife’s health was restored.”

That husband was as foolish as the husband who listened and believed his wife when she told him that she was dead. He was, not surprisingly, also cuckolded.

Men should question their wives and all other authorities ruling over them. It’s not just small-town men living in the mountains who stupidly listen and believe. Florence was one of the most cultural sophisticated cities in medieval Europe. Yet consider the case of medieval Florentine husband:

A Florentine citizen returned to his home after a year of traveling abroad. He discovered his wife in child-labor. He found this difficult to bear, for he suspected his wife of wrong-doing. Pondering the situation, for advice he sought out a neighbor, a noble and perspicacious woman, and asked her if a child could be born to him after twelve months.

The husband at least asked a question. But he didn’t do it right. He didn’t think first about gynocentrism and dominant interests:

She, seeing the man’s foolishness, consoled the husband. “Surely,” she said, “for if your wife, on the day she conceived, by chance saw a donkey, she will have been pregnant for a period of a year, in the manner of donkeys.” Accepting the words of the lady, and giving thanks to God for liberating himself from no small amount of suspicion and his wife from a great scandal, he called the son who was born his own.

In asking questions, men should seek empirical, verifiable facts, not just authoritative pronouncements. Men should seek out and question persons with relevant experience in the field.

Craftiness and guile are futile within the behavioral framework of listening and believing. Consider, for example, a case in medieval Venice:

An itinerant drug-seller came to Venice. His business banner was painted with a penis divided by a number of lines. A certain Venetian approached and asked what those divisions signified. For amusement the drug-seller said that his own penis was of a nature such that if he became acquainted with a woman in to the first part, she would give birth to a merchant; if in to the second part, a soldier; to the third part, a Duke; and to the fourth part, a Pope. His fee for using his penis was proportionate to the quality of person requested.

The Venetian man listened and believed. Then in consultation with his wife he concocted a deviously crafty plan:

Having communicated about the matter with his wife, the Venetian summoned the man to his house and settled on the price for making for himself a soldier-son. When the time had come to have sex with his wife, the husband pretended to leave, but secretly withdrew behind the bed. And when he saw them hard at work begetting a soldier, the simpleton rushed forward and vigorously pressed on the rider’s ass so as to enjoy the benefit of the penis being in to the fourth part. “By God’s Holy Gospels, this one will be a Pope!,” he exclaimed, thinking that he had taken advantage of his business counterpart.

If you merely listen and believe, even a devious ploy that seems to succeed will actually fail. No amount of dishonesty can substitute for listening, questioning, and seeking the truth.

All three exempla above are from the great medieval church official Poggio Bracciolini. The first exemplum is Facetiae 84, “Of the woman who feigned to her husband that she was half-dead {De muliere quae se viro semimortuam ostendit},” Latin text from Poggio (1879) v. 1, pp. 134-5, my English translation with help from id. The second exemplum is Facetiae 122, “One woman’s humorous response to a husband’s enquiry about whether his wife could spend twelve months bearing a child {Jucunda Responsio Unius Mulieris, Facta Ad Quemdam Quaerentem An Uxor Sua Per XII Menses Posset Parere},” Latin text from Poggio id., v. 2, pp. 1-2, similarly my English translation. The third exemplum is Facetiae 161, “Of the crazy Venetiam whom a itinerant drug-seller derided {De Veneto Insano Quem Pharmacopola Circumforaneus Derisit},” Latin text from Poggio id., v. 2, pp. 62-3, similarly my English translation. Poggio attributed the third exemplum to Giannino, chef to Baronto of Pistorium. Giannino had practiced the culinary art in Venice. Pistorium is located in present-day Tuscany, Italy, and is now called Pistoia.

These exempla were passed down across generations of medieval men. By preserving them in writing, Poggio, along with earlier scholars such as Lucretius, helped to preserve the possibility of enlightenment down to the present day. Poggio deserves to be celebrated as a great medieval humanist. He is a medieval scholar of prime importance today.

6 thoughts on “cuckolds don’t question; they just listen, believe and are duped”