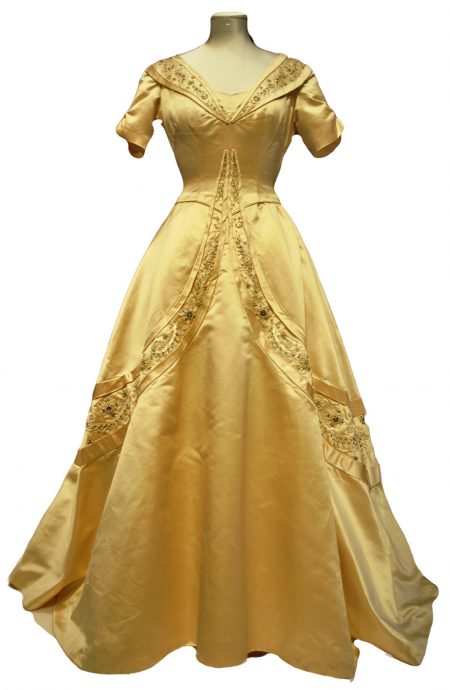 All that glisters is not gold;
often have you heard that told.
Many a man his life hath sold
but my outside to behold.
Gilded tombs do worms infold.
Had you been as wise as bold,
young in limbs, in judgment old,
your answer had not been inscrolled.
Fare you well, your suit is cold.

You that choose not by the view,
chance as fair and choose as true.
Since this fortune falls to you,
be content and seek no new.
If you be well pleased with this
and hold your fortune for your bliss,
turn to where your lady is,
and claim her with a loving kiss. [1]

In Shakespeare’s The Merchant of Venice, Bassanio rejected the silver and gold caskets. He choose the dull lead one. That was the casket that carried the inscription, “Who chooseth me must give and hazard all he hath.” Within that casket was the winning sign, a portrait of Bassanio’s beloved Portia.

Gazing upon Portia’s portrait, Bassanio lavishly praised its realistic beauty. Its eyes seemed to be alive and so beautiful that just one of them could have stolen the eyes of the painter. Her mouth seemed to exhale sweet breath that parted her lips, and her hair was a golden web that could entrap men’s hearts. This was just a portrait of Portia. Perhaps looking toward Portia, then turning back to her portrait, and then turning to fill his eyes again with her, Bassanio exclaimed:

Shakespeare connected the now-proverbial wisdom “all that glistens isn’t gold” to a woman’s appearance and to a mirror-like representation of her. Geoffrey Chaucer, a feminized, second-tier courtier writing mainly for women, associated “all that glistens isn’t gold” with men deceiving women. Shakespeare and Chaucer thus sensitively perceived this proverb in relation to another, now neglected proverb in Alan of Lille’s influential Book of Proverbs {Liber Parabolarum}.

The foremost intellectual and poet of the twelfth century, Alan of Lille recognized a world beyond mere appearances and fearlessly challenged entrenched falsehoods. In Liber Parabolarum, Alan declared:

Do not consider gold everything that shines like gold
nor think that each and every lovely fruit is good.
Virtue is not in many things in which it seems to be.
Our eyes deceive us with their actions.
Some have more of aloe than of honey in their heart
whom you think to be like saints in their simplicity.

The matter that we observe in a mirror is not in it;
Trust stands out, and it is not in woman.

In our benighted age, reigning authorities instruct the masses to “listen and believe” women, as if trust is inherent in woman. Even without indoctrination, both women and men are more inclined to trust women than men. Yet women are no more naturally trustworthy than men are. That’s what the eminent medieval scholar Alan of Lille sought to teach the ignorant. The general proverbial wisdom “all that glistens isn’t gold” applies to women as well as men.

Truth inconsistent with women-are-wonderful dogma tends to be suppressed in gynocentric society. Here’s a late-fourteenth-century French translation of Alan of Lille’s proverb on women and appearances:

In a mirror, the shiny thing
that seems to be there isn’t;
eyesight and a fox seem reliable,
but they are false like the devil.

Misogyny in this scholar’s evaluation apparently means any expression that some woman might claim offends her. Misogyny is also commonly used as a myth to support the myth of patriarchy. Rather than pondering an ever-more elaborate web of myths and convoluted explanations for why gender reality contradicts dogma, one might consider how a sensible, rational mind from more enlightened medieval times would interpret Alan’s proverb. Here’s a commentary on that proverb from a fourteenth-century scholar:

The ensuing proverb {Alan of Lille’s proverb on women and appearances} teaches us to flee and avoid, as much as possible for us, the company of a dissolute or suspicious woman. It says that some beautiful promise or certification that such a woman gives to a man, if there is not any trust apart from her appearance, is thus similar to a man seeing the appearance of her form in a mirror.

That’s good wisdom. It applies equally well to a dissolute or suspicious man. Most persons readily understand its application to men. Applying it to women is controversial under gynocentrism and thus far more socially important.

Geoffrey Chaucer appreciated that “all that glitters isn’t good” applies to heterosexual perceptions, but he differed from Alan of Lille and Shakespeare in gender-value judgment. In discussing men’s alchemy and the despair of men’s lives, Chaucer’s Canon’s Yeoman declared:

But every thing that shines like gold
is not gold, as I have heard said;
and every apple that is fair to the eye
is not good, whatever men may chatter or cry.

{ But al thyng which that shineth as the gold
Nis nat gold, as that I have herd told;
Ne every appul that is fair at eye
Ne is nat good, what so men clappe or crye. } [7]

The appealing apple alludes to the forbidden fruit in the Garden of Eden. Adam, the primordial subordinate husband, obeyed his wife Eve and ate the fruit, understood in medieval Europe to be an apple. Adam should have extensively questioned Eve before obeying her. Men today still haven’t learned that lesson. Men continue to blindly obey women, to the detriment of all human society.

Chaucer was more interested in his own personal advancement than in the welfare of all human society. Under gynocentrism, pandering to women is always profitable. Chaucer thus recast “all the glistens isn’t gold” in terms of men deceiving women. Narrating one of his dreams, Chaucer described the affair of Dido and Aeneas. Dido fell madly in love with Aeneas:

She made of him, in short, in one word,
her life, her love, her lust, her lord;
and showed him all the reverence,
and gave him all the wealth,
that any woman might do,
believing that it was all so,
as he swore to her, and by this judging
that he was good, for he seemed such.

{ Made of him, shortly, at oo word,
Hir lyf, hir love, hir luste, hir lord;
And dide him al the reverence,
And leyde on him al the dispence,
That any woman mighte do,
Weninge hit had al be so,
As he hir swoor; and her-by demed
That he was good, for he swich semed. } [8]

The results were tragic, and it was all his fault:

Alas! What harm does appearance,
When it is false in reality!
For he was a traitor to her;
and she therefore killed herself, alas!

{ Allas! what harm doth apparence,
Whan hit is fals in existence!
For he to hir a traitour was;
Wherfor she slow hir-self, allas! }

Chaucer all but claimed that Aeneas killed Dido. That’s about as accurate as prominent newspaper reports that about a quarter of men rape their wives. Moreover, Chaucer immediately generalized the tragic case of Aeneas and Dido:

See, how a woman is mistaken
to love him who isn’t known.
For, by Christ, see! Thus it goes:
“It is not all gold, that glistens.”

Chaucer declared that men in their pure nature (“pure kinde”) are untrustworthy:

For all that I pledge my head to be broken,
there may be by right-headedness
covered many a cursed vice.
Therefore be in no way so foolish
to take a love only for looks,
for speech, or for friendly manners;
For this shall every woman find:
that some man, of his pure kind,
will show outward the fairest,
until he has gotten what he desires;
and then he will find excuses,
and swear that she is unkind,
or false, or sly, or two-faced.

{ For, al-so brouke I wel myn heed,
Ther may be under goodliheed
Kevered many a shrewed vyce;
Therfor be no wight so nyce,
To take a love only for chere,
For speche, or for frendly manere;
For this shal every woman finde
That som man, of his pure kinde,
Wol shewen outward the faireste,
Til he have caught that what him leste;
And thanne wol he causes finde,
And swere how that she is unkinde,
Or fals, or prevy, or double was. }

Not all men are like that. Righteous men from Jerome in the fourth century to Paul Elam today have told women the truth. Yet condemning them and all men is an easy path for personal advancement.

The truth isn’t as superficially pleasing as pretty gynocentric lies. All that glistens isn’t gold. Both women and men must be wary of being deceived, for no flesh-and-blood human is intrinsically trustworthy. The learned, courageous medieval scholar Alan of Lille was wise. Don’t merely listen and believe women, for trust is not inherent in woman.

[2] Alan of Lille, Liber parabolarum 3.1, Latin text from Limone (1993) p. 64 (critical edition), English translation adapted from Pepin (1999) p. 160. Alan’s Liber parabolarum is also called Alani Parabolae, Doctrinale minus, and Parvum doctrinale. Limone’s Latin text is based on fifteen manuscripts dated from the middle of the thirteenth century to end of the fifteenth. Limone (1993) p. 27. While Limone’s text is currently the most authoritative, Latin texts are also available in Patrologia Latina 210,  and in appendices of both Hunt (2005) and Hunt (2007).

Alan of Lille’s epitaph recognized his intellectual eminence. It proclaimed:

Liber parabolarum was included in the Auctores octo that was central to late-medieval school teaching. It was thus widely studied in medieval Europe.

[3] Liber parabolarum 1.8, Latin from Limone (1993) p. 46, English translation adapted from Pepin (1999) p. 152. Its paired proverb is 1.7. That proverb concerns the deceptiveness of a new path and a new ally. Proverb 1.4 warns against entrusting to old men an opinion that you wish to remain private. Medieval thinkers undoubtedly understood that proverb to apply to old women as well.

The matter that we observe in a mirror is not in it;
Trust stands out, and it is not in woman.

{Commentary} The same is not in the mirror that is perceived in the glass; trustworthiness is lost in a woman, but it seems that it is there.

The French translation that Antoine Vérard printed in 1492 also didn’t obliterate the reference to woman:

There isn’t the real form
in a mirror that a man perceives there;
in a false woman also, likewise,
there isn’t the fidelity about which the man is very deceived.

[image] Gold wedding dress. Made in 1951 by Norman Hartnell. Source image thanks to Elisa.rolle and Wikimedia Commons.

One thought on “Alan of Lille, Chaucer & Shakespeare knew all that glistens isn’t gold”