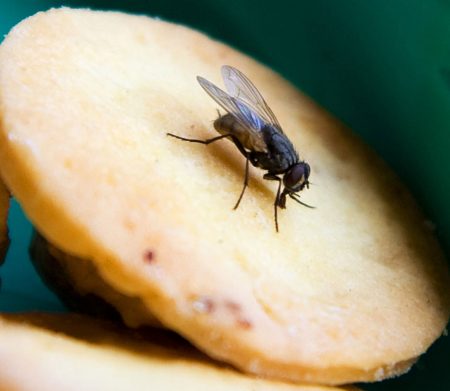 Look well about you who lovers be,
let not your lusts lead you to dotage.
Be not enamored with all things that you see:
Samson the strong and Solomon the sage,
deceived were for all their great courage.
Men deem it right that they see with eye,
but ever beware: the blind swallows many a fly!

I mean of women, for all their sexy looks,
trust not too much; their truth is oft lacking.
The fairest outer they can well-construct.
Their steadfastness lasts only a season;
they feign friendliness and work at treason.
And since they are changeable naturally,
beware, therefore: the blind swallows many a fly.

Though all this world does its anxious work
to make women stand in stableness,
it may not be; it is against nature.
The world has doubt when they lack doubleness.
They laugh and love not; men know this in fullness.
In them to trust — it is but fantasy.
Therefore, beware: the blind swallows many a fly.

Some man in love who trusted on their faces,
shall have at last his payback and his wages.
They shave nearer than do razor or shears.
All is not gold that glitters, men take heed!
Their bile is hid under a sugared weed;
it is quite hard their fantasies to descry.
Beware, therefore: the blind swallows many a fly.

Women by kind have conditions three:
the first is they be full of deceit,
to spin also is their tendency,
and women have a wonderful conceit:
they weep often, and all is but a sleight.
And when they desire, the tear is in the eye.
Therefore, beware: the blind swallows many a fly.

In truth to say, though all the earth so ashen
were parchment smooth, white, and writable,
and the great sea, called ocean,
were turned to ink, blacker than is sable,
each stick a pen, each man a writer able,
they all couldn’t write women’s treachery.
Beware, therefore: the blind swallows many a fly!

{ Loke wel aboute, ye that lovers be;
Lat nat your lustes lede you to dotage;
Be nat enamoured on al thing that ye see.
Sampson the fort, and Salamon the sage
Deceived were, for al hir gret corage;
Men deme hit is right as they see at y;
Bewar therfore; the blinde et many a fly.

I mene, in women, for al hir cheres queinte,
Trust nat to moche; hir trouthë is but geson;
The fairest outward ful wel can they peinte,
Hir stedfastnes endureth but a seson;
For they feyn frendlines and worchen treson.
And for they be chaungeáble naturally,
Bewar therfore; the blinde et many a fly.

Though al the world do his besy cure
To make women stonde in stablenes,
Hit may nat be, hit is agayn nature;
The world is do whan they lak doublenes;
For they can laughe and love nat; this is expres.
To trust in hem, hit is but fantasy;
Bewar therfore; the blind et many a fly.

What wight on-lyve trusteth in hir cheres
Shal haue at last his guerdon and his mede;
They can shave nerer then rasóurs or sheres;
Al is nat gold that shyneth! Men, take hede;
Hir galle is hid under a sugred wede.
Hit is ful hard hir fantasy t’aspy;
Bewar therfore; the blinde et many a fly.

Women, of kinde, have condicions three;
The first is, that they be fulle of deceit;
To spinne also hit is hir propertee;
And women have a wonderful conceit,
They wepen ofte, and al is but a sleight,
And whan they list, the tere is in the y;
Bewar therfore; the blinde et many a fly.

What thing than eyr is lighter and meveable?
The light, men say, that passeth in a throw;
Al if the light be nat so variable
As is the wind that every wey [can] blow;
And yet, of reson, som men deme and trow
Women be lightest of hir company;
Bewar therfore; the blind et many a fly.

In short to say, though al the erth so wan
Were parchëmyn smothe, whyte and scribable,
And the gret see, cleped the occian,
Were torned in inke, blakker then is sable,
Ech stik a penne, ech man a scriveyn able,
They coud nat wryte wommannes traitory;
Bewar therfore; the blinde et many a fly. }

Why did John Lydgate write this Middle English poem? Modern scholars commonly label his poem misogyny or anti-feminism. Those labels suggest that John Lydgate was a misogynist or an anti-feminist. But according to dominant ideology, women throughout history, except perhaps in recent decades (much work remains to be done), have been treated as chattel. Why would men hate their chattel, or even be interested enough in their chattel to write poems about them? Something is rotten in the state of modern scholarship.

Perhaps John Lydgate wrote this poem to warn men about being deceived by women. Warning men about their weaknesses relative to women is scarcely permitted in our more repressive and totalitarian time. Men’s weakness and the social control of men’s speech are interpretive keys to understanding reasonably John Lydgate’s poem.

The above poem in Middle English is printed as poem 14 in Skeat (1898), where it’s entitled “A Balade: Warning Men to Beware of Deceitful Women.” Forni (2005) has a new edition. The poem is attributed to John Lydgate. He was a monk and prolific poet who lived from about 1370 to 1450.

But whether that the blind eat meat or fish,
I pray God keep the fly out of my dish!

See ll. 20-1 in “Of theyre nature they gretly theym delyte,” available in Forni (2005). About 1603, Thomas Heywood wrote a now-lost play called “the blinde eates many a flye.” A seventeenth-century ballad entitled “The Blind eats many a Flye: or, The Broken Damsel made Whole” describes a woman deceiving a man into marriage and cuckolding. Other seventeenth-century ballads with similar titles also express the theme of men being deceived by women.

“Loke wel aboute, ye that lovers be” includes references to other themes of men’s sexed protest. Lydgate’s ballad that begins “This world is ful of variaunce” (Skeat (1898) no. 13) offers a repressed, satirical view of what it asserts to be women’s gender-characteristic “doubleness.” Regarding the three conditions (characteristics) of women, medieval Latin included the proverbial expression:

To lie, to cry, to spin: these three are of women.

Skeat (1898) note for l. 29, p. 516; Forni (2005) note for ll. 29-34. Spinning is an occupation historically associated with women’s work. In this context, spin also has metaphorical significance associated with deceiving. Across literary history, medieval Latin generated the most vibrant and creative literature of men’s sexed protest.

Supporting dominant gynocentric ideology, modern scholars have tended to dismiss literature of men’s sexed protest with the superficial and anachronistic label “anti-feminist.” See, e.g. the section introduction in Forni (2005). The academics Margo Wilson and Martin Daly have been peddling for decades the myth that women historically have lacked agency and have been men’s chattel. See note [4] and associated text in my post on primatology and vegetarianism. Men’s communicative and social inferiority relative to women has increased in importance with the shift from manufacturing to symbolic economies.

[image] Fly on cake. Excerpt from photo released to the public domain thanks to Petr Kratochvil on freestockphotos.biz.