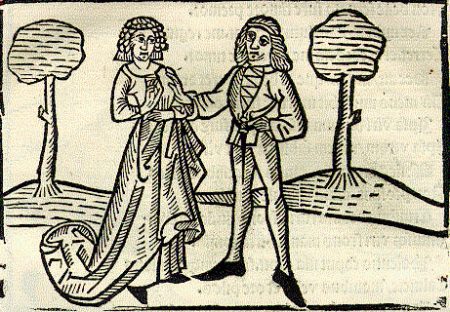 The courtesan Thais regularly had sex with Alexander the Great’s leading general Ptolemy. Moreover, when it came to decisive action, Thais led Alexander the Great like slave girls ruled all-powerful caliphs in the ancient Islamic world. Thais became renowned for inducing Alexander to burn the Persian capital city of Persepolis in 330 BGC.

About two millennia ago, the Latin writer Phaedrus described how women like Thais dominate men despite men’s understanding of their deceptions. Phaedrus put forward this astonishing effect in the form of a fable:

A prostitute and a young man

With enticements a dishonest prostitute baited a young man,
and he gave himself to her frequently with much injury to himself.
Just as many easy women have presented themselves,
so this insidious being said: “Although all men with gifts
contend for my consent, I do you before everyone else.”
Recalling how often she had deceived him,
he said, “Gladly so, shining light. I hear your voice,
not that I believe it, but it makes me happy.”

That’s the pathetic spirit that prompts husbands to accept being cuckolded. In the twelfth century, Gualterus Anglicus expanded upon Phaedrus’s fable:

On the young man and Thais

By her cunning Thais ensnares young men; she feigns
Love, and from feigned love comes profit.
From many suitors she receives many things; from all she chooses
One youth, and to him she promises the riches of true love.
“I am yours, and may you be mine. I want you alone more than all,
But I do not want to have your gift.”
He perceives her tricks and returns words such as he has received:
“I am yours, and may you be mine; equal love becomes us.
I would not wish to live unless you wish to live with me.
You are my only salvation, you are my only repose.”

The phrases “the riches of true love {veri amoris opes}” and “equal love {equus amor}” point to the twelfth-century backlash against men-subordinating courtly love. With medieval Latin freedom of speech, Gualterus Anglicus even dared to criticize women; specifically, women who deceive men and who use men as a means for freely acquiring material goods. Turning against the young man’s passive acceptance of being exploited in Phaedrus’s fable, Gualterus Anglicus offered men wisdom for pragmatic action:

A bee avoids the yew-tree which it has often tested by tasting.
If any woman deceived yesterday, she wants to deceive today.
If anyone loves Thais, let him believe that his goods are loved, not himself:
Thais lacks love, but loves the lover’s gift.

In his pioneering printing of fables translated into English, William of Caxton in 1484 put the matter more generally:

For the love of a promiscuous woman is not to be trusted,
for you should know and think for yourself
that the promiscuous and foolish woman loves you not,
but she loves your money.

{ For the loue of a comyn woman is not to be trusted
For thow oughtest to knowe and thynk within thy self
that the comyn and folyssh woman loue the not
but she loueth thy syluer. } [4]

Instantaneous feelings of happiness are no substitute for truth and reason. Given that men have no reproductive rights and men are readily lynched as rapists, men should consider carefully before they engage in pleasurable sex with women. Rather than trading goods for sex with women, men should insist on the value of their intrinsic virtue.

[1] From Phaedrus’s Latin verse rendition of Aesop’s fables. This fable is from Perotti’s addition to the collection of Phaedrus, Appendix 29. The Latin text is available from Aesopica and Perseus. The English translation is mine, drawing up that of Laura Gibbs and that of Ben Edwin Perry, Loeb Classical Library 436 (1965). The subsequent quote is similarly from this fable. In Perotti’s manuscript, the fable includes a promythium:

Like the fable itself, this promythium provides a keen psychological observation without any ethical imperative.

Baeza-Angulo (2013) provides detailed philological analysis of this fable, along with a superficial analysis of its relation to Roman amatory elegy. The gender conservatism and complacency of his analysis is appalling. Consider:

We find in the words of the young man not only the tolerance that is born with  humanitas {civilization}, but also a serene acceptance of the compromises that help a man to live. He knows perfectly well that the modus uiuendi {way of life} of his beloved prevents her from being faithful and, therefore, she is content to tell him that he is the preferred one, although the others can give her expensive gifts. Satisfying his manly pride, this gives him exactly that moment of sweet happiness that will allow him to bear new betrayals.

[2] From Gualterus Anglicus’s collection of Aesop’s fables {Aesopi Fabellae}. The Latin text is online thanks to Laura Gibbs; the English translation is from Pepin (1999) p. 204. The subsequent quote is similarly from id. Another version of this fable is known as Of Thais and Damasius {De Thaida et Damasio}. Gualterus Anglicus’s fable collection was the most widely transmitted fable collection in medieval Europe. It has survived in about two hundred manuscripts and about thirty-four print editions from before 1501. Wright (1997) p. 3. Many manuscripts of Gualterus Anglicus’s fables contain extensive glosses, commentaries, and allegorical epimyths. Id. p. 4.

[3] Yew trees have been long known to present serious risks of poisoning. Most Latin texts include the first two lines above as quoted words of the young man. Those quotation marks are editorial (twelfth-century texts didn’t include quotations marks). While promythia for Gualterus Anglicus’s fables typically are couplets, the promythium for De iuvene et Thaide seems to me to be best interpreted as a quatrain.

The moral for the medieval Romulus Anglicus is similarly pointed:

Moral: we are thus warned not to believe readily the words of women when, although they have many lovers, they say they are content with one.

Latin text via Laura Gibbs, my English translation. On the complex manuscript tradition of the medieval Romulus collection of Aesop’s fables, Vámos (2013).

[4] William Caxton, Aesop’s Fables 3.10 (“Of the yonge man and of the comyn woman”), via Laura Gibbs. Here’s the full text of Caxton’s work.