Men today are attacked for having testicles — nuts containing “toxic masculinity.” Appreciation for men’s seminal fruitfulness can help to raise men’s status. Nonetheless, more than two millennia ago, the poetically fruitful Ovid, like a walnut tree, was subject to violent attacks aimed at his fruits. In despair as a man, Ovid yearned to be castrated and made unproductive. Just so many men feel today.

through which the god-like species is preserved despite being
composed of mortal individuals. This particular organ is given so,
not returning love into himself, despite seeing himself reflected in other men,
a man continues the forward movement of procreation.
This particular organ makes the female receiver fruitful. In a fixed time
she by her own means brings forth children as her sweetest offering,
which to humanity is more pleasing than anything else.

Women and men in conjugal partnership can create and nurture children. But just as historically the penis has been disparaged relative to the vagina, men have been socially constructed as persons who have to prove themselves worthy of being regarded as virtuous. Under gynocentrism, men’s worth fundamentally depends on how well they serve women. Men’s service to women has even developed to the extent of sexual feudalism.

Women’s appreciation for men’s sexuality helps to lessen men’s subservience to women. The author of De vetula, writing for his fellow men, declared:

This particular organ serves the woman
such that the proud partner of his bed gladly and willingly
puts herself under her man’s direction — an amazing submission,
since we are women’s servants!

The ancient prophet Tiresias recognized that women get more pleasure from sex with men than men do from sex with women. Back in the days when women were grateful for men’s sexual labor, women were less imperious toward men who sexually served them and were more willing to accept men’s direction in their shared endeavors. 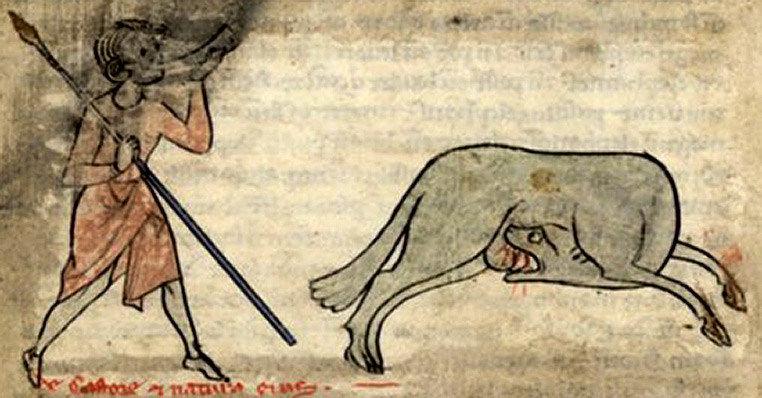 Instead of appreciating men’s sexuality, women now throw rocks at men. Men’s seminal blessing is now regarded as a curse:

Now fruit doesn’t continually grow every year,
and damaged grapes and bruised berries come into the home.
Now women who want to seem beautiful harm their wombs.
Rarely in this age does anyone wish to be a parent.
…
If the vine should know this, it will suppress birthing grapes.
The olive tree, if it should know this, will be barren.
Should this come to notice of apple and pear,
both will deprive their orchards of fruit.
Should the cherry hear this, it will forbid sprouting buds.
Should the fig hear this, its branch will be empty.

In such circumstances, walnut trees, other fruiting trees, and many men in despair yearn for the benefits of castration:

O, when I have grown weary with my long life,
how often have I wished to dry up and die!
How often have I wished to be uprooted by a blind whirlwind,
or struck by the powerful fire of a hurled thunderbolt!
Indeed, I wish that a sudden gale would snatch away my fruit,
or I myself could shake off my nuts!
Just as once you have cut off the cause of your peril,
you keep safe, Pontic beaver, what remains.

Hunters sought to kill the Pontic beaver so as to extract his testicles. That beaver was thought to chew off his own testicles to ensure his safety.[4] In this poem, the wish to dry up and for the wind to overturn the firm, erect wood of the walnut tree also figure castration culture. Yearning for impotence and castration is men’s ultimate cry of despair. 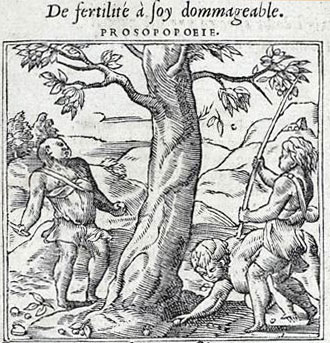 Ovid refused to accept men’s subservience to women. He taught men the art of love in order to help them overcome women’s advantage in guile. Not surprisingly, Ovid was persecuted within gynocentric society for his progressive poetic productivity. In despair, he apparently yearned to be castrated. A medieval author poetically conceived that blow against Ovid:

For the true story is
that he had both his balls cut off.
With pieces of flax and soft eggs
they were bandaged and healed.
Then he lived for many years
and was sent into exile
and transported overseas.

Violence against men’s genitals has been a prevalent form of gendered punishment throughout history. Persecuting men for their genitals and punishing men’s genitals serves to uphold the gynocentric order. 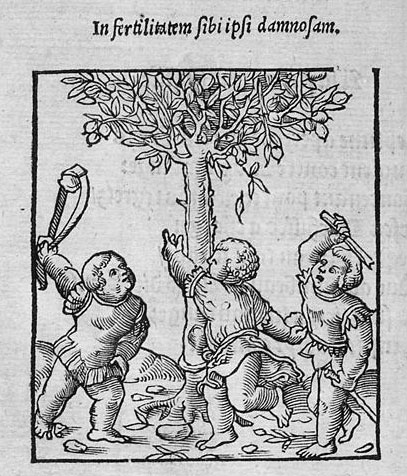 Ovid’s despair offers men lessons as important as his art of love for women. Despite society’s hostile toward men, men must strive to cherish their own gendered being. The ancient transgressive scholar Lucian depicted men enjoying sexual windsurfing. That’s possible but not necessary. More importantly, men must conceptually reject the history of man or the future of mankind. Within historical gender obliviousness, men — distinctly gendered, fully human beings — have been marginalized in the history of man. Despite current female supremacist claims that the future is female, if humankind has a future, in it men will be a distinctive, self-respecting group.

Introduction to the work of Ovid Naso of the Paeligni, On the Old Woman, published by Leo, protonotary of the holy palace of Byzantium, who was then keeper of the letter case of Vatatzes and his record keeper.

Id. pp. 134-5. This preface goes on to declare that the King of Colchis found this work in a coffin in a cemetery in Dioscurias, the capital of Colchis. The King of Colchis sent the manuscript to Constantinople. In Constantinople, Leo the protonotary received the manuscript and added the second preface. The third preface, purportedly by Ovid himself, then leads into the work. The elaborate fictions of the prefaces underscore the contrasting reality that the work isn’t actually Ovid’s.

or those who have been accustomed to violate chaste beds
after being caught in adultery having their genitals
violently cut off by the hand of an angry husband.

De vetula 2.10-2. In addition to the brutal bodily injury, men castrated for adultery endured additional verbal abuse from others:

If the husband prevails,
by chance coming upon the lover whom he catches and mutilates,
avenging the adultery, there will be commotion and laughter
from the people. No one will feel compassion for him
for the castration he has suffered, nor will any judge hear his case.

They planted me, a walnut tree, by the roadside to amuse passing boys, as a mark for their well-aimed stones. And all my twigs and flourishing shoots are broken, hit as I am by showers of pebbles. It is no advantage for trees to be fruitful. I indeed, poor tree, bore fruit only for my own undoing. 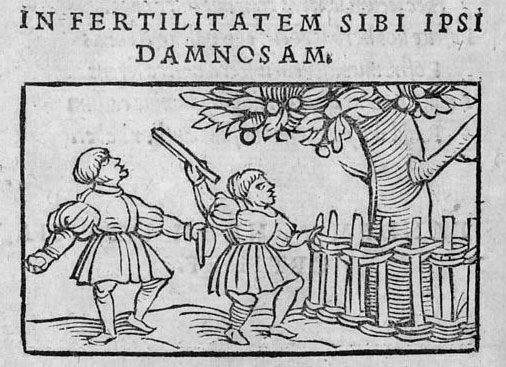 Starting from the coincidence that a poem ascribed to Ovid should allegorize so neatly the plight of the poet ruined by the fruits of his own genius, the Nux can be seen to carry the parallelism of the situation deeper into the details of Ovid’s exile. … Alone the allegory cannot decide the problem of authorship, but at least it shows that if Ovid did not write the Nux, then the man who did had a remarkably skilful and sympathetic insight into the predicament of the exiled poet.

[4] This belief about the Pontic beaver goes back at least to Cicero. See note [2] in my post on Sincopus. The fourth-century hermit Ammonas of Tunah drew insight from the self-castrating behavior of the Pontic beaver.

Describing a time when “there was competition in fertility {certamen fertilitatis erat}” (v. 8), the walnut tree declared:

Indeed, following our example, women gave birth;
in those times no woman was not a mother.

Among the Hebrews sterility was considered very shameful. In antiquity the production of many offspring was regarded as a fine thing. It was a sign of good fortune to earn the epithet “well-childed,” and conversely, to be called “childless” was shameful. This is why the poets write about the daughters of Danaus and Belus, and about Priam and Hecuba, and Niobe, and so on. Historians commemorate those blessed with copious progeny. In those days, the object of matrimony was offspring. Nowadays most take a wife for pleasure, and a woman who produces many children is called a sow. The ancients used drugs to induce fertility, but now, alas, drugs to induce abortions are more well-known.