Deeply entrenched castration culture supports castration of men as well as men being sexually abused and raped. Within gynocentric society, men’s sufferings are cruelly marginalized. Yet prior to modern social and technological means of repression and censorship, men could openly and vigorously curse those who abused them. Such cursing affirms men’s humanity and should be supported as a vital expression of men’s sexed protest.

In his collection and comparative study of ancient political constitutions, the great Greek philosopher Aristotle recorded that the Elians under King Pantaleon castrated men from other polities seeking to communicate with them. Aristotle implicitly condemned as immoderate the castration culture that Pantaleon brutally enacted:

Pantaleon, who was overbearing and severe, ruled among them. He castrated ambassadors who had come to him and compelled them to eat their testicles.

May another hack off your genitals, as Saturn so
cut away those parts from which he was created.

Cursing other men with castration highlights that castration culture is systemic. Both men and women are complicit in castration culture. Women and men raping men and sexually harassing men, crimes too often trivialized and ignored today, violate men’s sexuality just as do ultimate forms of castration.

In circumstances of persons being oppressed and otherwise powerless to effect change, cursing can function as protest. Ovid engaged in such cursing. He was thought in medieval Europe to have fallen in love with a beautiful, sixteen-year old woman. He offered an old woman, who had once been the young woman’s devoted nurse, expensive gifts to act as a go-between. Initially reluctant because she feared the young woman’s father, eventually she “devotes herself to the Furies {furiis se devovet}” and agreed to work for Ovid in his love-quest.[3]

Ovid eagerly looked forward to a night of love with the young woman. Just as men in the Islamic world extensively prepared themselves for strenuous erection labor, Ovid also carefully prepared himself for love-work:

I bathed myself a little and trimmed my beard and pubic hair.
Yielding to myself a brief sleep in the afternoon, I prepared
my penis and other limbs to spend a night without rest. Then
I fed myself bone-sucked liquids and drank fresh grape-juice.

Despite his careful preparations, Ovid’s love-journey went badly. Leaving his home at night, he smashed his forehead on a doorpost and got a bloody gash. Then he tripped and fell down his stairs. He felt that he was plagued by Furies, and perhaps also Harpies, known for crapping on men’s tables and stealing their food.[5] Finally Ovid arrived at his beloved’s house and stealthily got into bed with her. But then he realized an even more disastrous injury:

The ancient Greek love-lyre’s sound turned into lament, stupefied
were my hopes of delight, and the torch of my amorous fire died.
Whatever it was that my liver had sent out by windy turbulence
and that had made me erect, suddenly languished and fell.
My manliness went to sleep; my penis and all my limbs became cold.
Who would believe that a young woman who had turned
sixteen recently could grow old so quickly!
Never has a rose shriveled in so little time.

The old woman had tricked Ovid by putting herself in the maid’s bed instead of the young woman. In short, Ovid suffered rape by deception. 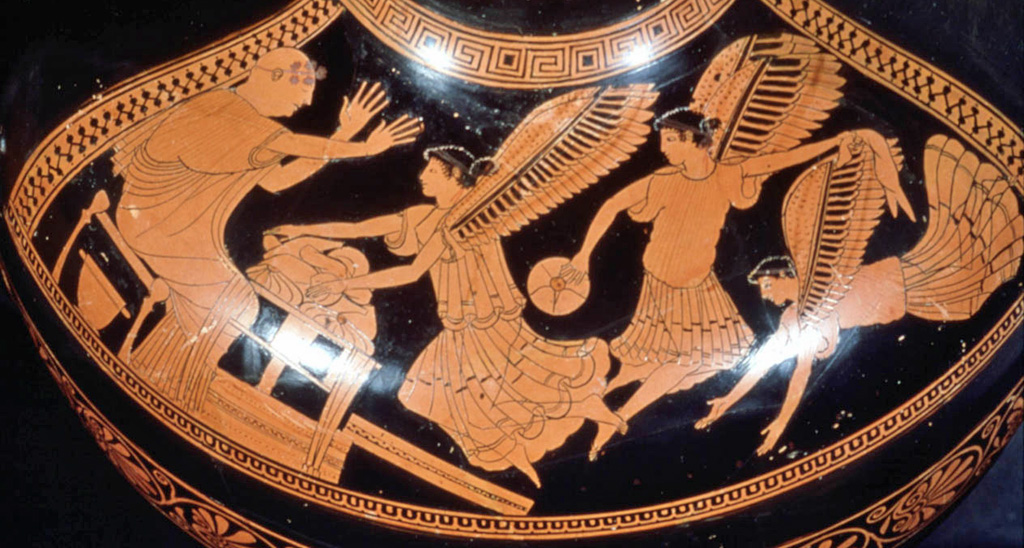 Of course, no one in medieval Europe or anywhere today would actually prosecute a woman for raping a man by deception, even if she did more than lie about her age. In fact, women teachers today are scarcely punished for raping their boy-students. Ovid turned to the best instrument of justice he possessed. He harshly and at length cursed the old woman. His curse ended with reference to bodily functions in a way not permissible in our more repressive and dogmatic time:

May her crying be continuous and her tears be perennial,
her sobbing sudden, and her sighs often and frequent.
May her mouth gape, distended with breath and stiffness, and
her belching stink, and she be unable to blow her nose.
May all the pus and inflammation descend into her mouth;
may she not even spit this out, but swallow it and vomit it out.
May neither her bladder nor her anus contain neither urine
nor shit, but may she be continuously soaked in front and back.

Not surprisingly, Ovid was eventually castrated for not sufficiently supporting gynocentrism.

As organs of propaganda continually inform the public today, men’s relations to women consist not just of rape, but also of sexual harassment. Ovid in medieval Europe was known to have suffered sexual harassment by an old woman:

Now gnawing herself from inside with love-madness,
an unhappy old woman asked me to have sex with her.
“My sweet hope,” she said, “if you would wish to press your penis here,
all things that are mine, my sweet hope, you will have!”

Ovid preferred to have sex with young women. He didn’t welcome this old woman’s sexual advance. Thus under today’s codes of conduct, she is therefore guilty of sexual harassment. Rather than complain to his and her managers, write a denunciation to be published in a newspaper, or attempt to arouse a social-media mob, Ovid cursed the old woman:

May the gods multiply worms in your vagina and nearby anus,
and may your mouth be augmented with the delight of shit!

Now that medieval Europe has fallen, men living in its broken heritage can no longer similarly curse in response to sexual harassment. If men today dare to protest any injustices against men, they must fear for their safety from multitudes of ignorant, intolerant, university-educated fanatics.

Freedom to curse must be vigorously supported today. As medieval Europe understood, freedom to curse is fundamental to social justice. Cursing is the sigh of the oppressed creature, the heart of a heartless world, and the soul of soulless conditions.

[1] Aristotle, Political Constitutions {Πολιτεῖαι}, fragment 27, from the Constitution of the Elians, Greek text (with slightly regularized orthography) and English translation (modified insubstantially) from Dilts (1971) pp. 22-3. This is Aristotle, fragment 611.21 in Rose (1886).

Elis is located in the western part of the Peloponnese peninsula in present-day Greece. Elis sought to control Zeus’s sanctuary at Olympia and the surrounding area of Pisa. Olympia was the location of the archaic and classic Olympic games. The Pisatan kings Pantaleon, Damophon and Pyrrhos contested Elean power. Pantaleon, son of Omphalion, controlled Olympia in 668 BGC and celebrated the Olympic games of that year. The ambassadors that Pantaleon castrated and sexually abused were probably Elian envoys protesting his celebration of the Olympic games. Kõiv (2013) pp. 322, 353. On the history of Elis and Pisa, id. On the history of the Olympic games, Christesen (2005).

[4] Pseudo-Ovid, About the Old Woman {De vetula} 2.397, Latin text of Klopsch (1967), modified insubstantially, via Hexter, Pfuntner & Haynes (2020), my English translation, benefiting from that of id. De vetula was a widely read medieval work. It has survived in nearly 60 manuscripts. See notes in my post on Ovid castrated.

The Furies (Erinyes) of ancient Greek myth are three: Allecto, Megaera, and Tisiphone. The Furies punished persons who committed crimes.

[5] The Harpies are half-women, half-bird, long-clawed flying creatures. Harpies tormented King Phineus of Thrace by befouling his table and stealing his food. Harpies similarly harassed Aeneas and his men on the Strophades Islands. Aeneid 3.209-277. In some instances the Harpies worked on behalf of the Furies. See, e.g. Odyssey 20.61ff.

[6] Pseudo-Ovid, About a Certain Old Woman {De quadam vetula} vv. 1-4, Latin text of Klopsch (1961) via Hexter, Pfuntner & Haynes (2020, my English translation, benefiting from that of id. The subsequent quote above is similarly sourced from De quadam vetula vv. 45-6, which end the poem.

De quadam vetula has survived in a single, fifteenth-century manuscript: Venice, Marciana lat. XII 192. Id. p. xxi. This story has a much different direction than another medieval story, About the Guile and Art of Old Women {De dolo et arte vetularum}, story 13 in Wright (1842).

Wright, Thoma, ed. 1842. A Selection of Latin Stories from Manuscripts of the Thirteenth and Fourteenth centuries : a contribution to the history of fiction during the Middle Ages. Early English Poetry, Ballads and Popular Literature of the Middle Ages. 8 (1). London: Richards, printer, for Percy Society.