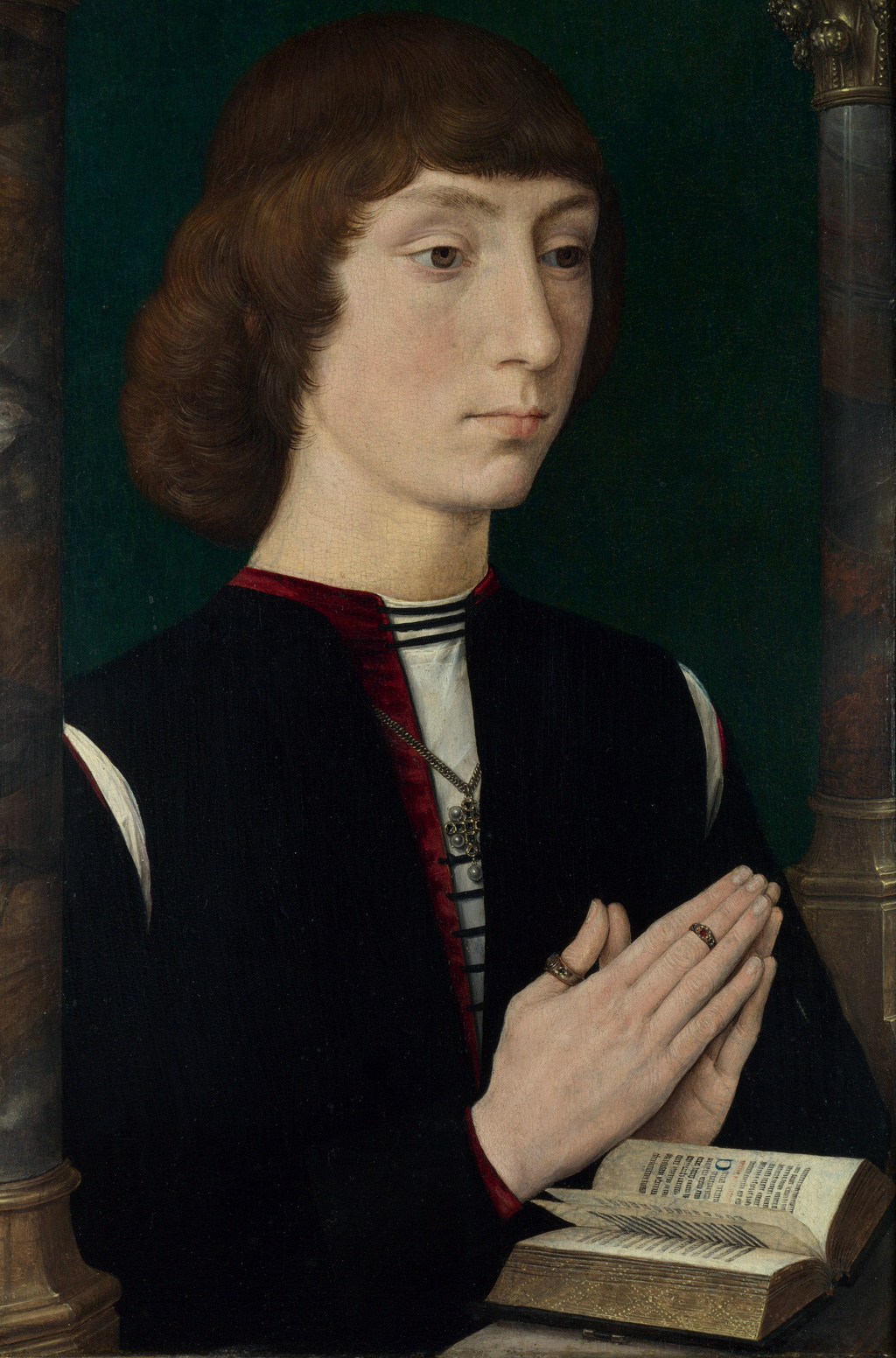 Concubines rank lower than wives in most societies’ social structure. But what about men’s status?[1] The learned and eloquent ancient Roman orator Cicero described the desperation of husbands suffering from their wives’ abuse. In early-eleventh-century Baghdad, the rich merchant ibn Jumhūr had to endure torrents of abuse from his concubine Zād Mihr. In actuality, husbands are not only subordinate to their wives, but also subordinate to their concubines.

A coherent medieval collection of prayers spanning all stations of society documents the struggle against men’s subordination to their concubines. The collection begins by acknowledging the failures of all:

Let us pray for every status in the Church!
All have gone astray. Together they are made hurtful. There is none who would do good, no, not one.

The next three prayers harshly denounce the behavior of the nominally leading men of medieval society:

For the pope and the cardinals.
From elders is coming forth the wickedness of my people, who the bad example they see, they follow.

For our king.
Destruction and misery are in his way, and the way of peace he has not yet discovered.

For the leaders of the land.
O Israel, your princes are rebellious, companions of thieves, and act very similar to tyrants.

For our household servants.
The elderly servants are always slow. While they eat, they get warm; when working, they get cold.

Let us pray also for our concubines.
They themselves will truly be our judges and rule us with an iron rod, by which for our faithlessness our property is squandered.

For our extra-marital children.
They themselves are witnesses of their parents’ wickedness, which will itself walk by its own paths.

In the difficult circumstances of their lives, men often accept passively injustices done to them. The biblical story of the massacre of the men of Shechem tells of treacherous, vicious violence against men because of Shechem’s illicit love for Dinah. Violence against men still remains the undistinguished, untroubling understanding of violence. When the Hebrews wandering in the desert lacked water, Moses and Aaron had to do something. Men are valued as men in their doings, not merely in their being. Whatever the man Jonah did was wrong. A whale ate him at sea and on land the sun beat down on his head. Who has compassion for Jonah’s suffering and for the suffering of men generally? About 855, a highly learned German theologian poignantly portrayed men’s despair:

But already Shechem was asking for the dishonored Dinah,
Aaron was spilling water, competing then with Dinah,
bald Jonah was destitute, shipwrecked in the sea;
together they mourned, stroking their trimmed foreskins.

Learned and wise authorities have long sought to dissuade men from gyno-idolatrous subservience to their concubines and to women in general. At some time between the middle of the ninth century and early in the sixteenth century, a scribe copying the prayer for concubines added wisdom from Cicero:

And can I regard as being free a man over whom a woman rules? On whom she imposes laws, and to whom she orders, commands, and prohibits? Moreover, is not he himself a miserable little man who none of her rulings is able to negate, who dares to refuse her nothing? If she calls him, he is coming. If she asks, he is giving. If she throws him out, he is leaving. If she threatens, he is trembling.

These are the men that men-abasing courtly love ideology celebrates. These little men are prevalent in gynocentric society. They are not free men. Teach your sons not to be those men!

Women who love men must do more to help men. Not satisfied with merely the authority of Cicero, perhaps another scribe added wisdom from the biblical book of Ecclesiastes:

Today such wisdom tends to be trivialized through name-calling. Medieval authorities were more enlightened. Matheolus warned men against oppressive practices of women and the church. The satirical medieval Fifteen Joys of Marriage described men becoming prisoners in their marriages. Some medieval women viciously cuckolded their husbands. Teach your daughters not to be those women!

The combined authority of Cicero and Ecclesiastes sadly has been insufficient to save men from subservience to women. As the medieval manuscript indicates, inadequate philological education in schools hinders vigorous social criticism. Thus to the quotes from Cicero and Ecclesiastes under the prayer for concubines, a medieval reader added explanatory glosses: “she imposes laws {leges imponit}” glossed as “command {mandatum}”; “she orders {prescribit}” glossed as “what must be made to be {quid faciendum sit}”; and “she vetoes {vetat}” glossed as “she prohibits {prohibet}.” One must first understand in order to resist.

Most men today lack the opportunity to study medieval Latin language and literature. Yet even deprived of that important opportunity, men can understand gynocentric oppression simply by asking questions. Why does the gender composition of highly privileged persons such as corporate executives, political leaders, and math professors generate more public concern than the massively disproportionate incarceration of men? Why are men deprived of any reproductive rights whatsoever and have only the choice to engage in abortion coercion? Why does grotesque anti-men gender discrimination continue to pervade family courts while governments move to enact paid parental leave? The fundamental answer to those questions is simple: the actual status of ordinary men is lower than that of their concubines.

[1] On the formal and actual status of medieval concubines, see Brundage (1993) and Karras (2014). Medieval historians typically share common delusions about men’s status in the present. Their historical work on gender is thus scarcely credible.

[2] Prayers for every status in the church {Orationes pro omni statu ecclesiae} 1, Latin text from Bayless (2018) p. 53 (text 7), my English translation. For ease of reading, I’ve made some insubstantial changes to Bayless’s Latin text, e.g. differentiated v from u, and j from i. Subsquent quotes from this text are sourced similarly.

Bayless has edited this text from MS. Rome, Vatican City, Biblioteca Apostolica Vaticana Pal. lat. 1050, fols 293r-294. This manuscript was written in parts in 1475 and 1530. Id. The line of commentary following the call for prayer adapts Psalm 14:3 (in modern numbering).

[4] Orationes pro omni statu ecclesia 27-29 (out of 33 prayers in total). Prespiterum apparently is a medieval Latin spelling of presbyterum. Bayless notes the commentary to the prayer for household servants is “common in medieval satire.” Prayers 28 and 29 adapt Matthew 12:27 and Psalm 2:9; and Wisdom 4:6, respectively. Bayless (2018) p. 59, notes.

But since someone was contending with Dinah, Aaron was spilling water, and Jonas was destitute.

Latin text from Modesto (1992) p. 30, my English translation. Dinah seems to be related to Aaron spilling water through the implicit sense that she was crying over her brothers killing her beloved Shechem. Hrabanus Maurus wrote his Cena nuptialis about 855 and dedicated it to Lothar II, King of Lotharingia. On Cena nuptialis, Bayless (1996) pp. 38-40.

[6] Orationes pro omni statu ecclesia 28.4-8 (additional commentary). The text notes: “These are Cicero in Paradoxes {Hec Cicero in Paradoxa}.” The reference is to Cicero, Stoic Paradoxes {Paradoxa stoicorum} 5.36, which is quoted closely, but not exactly. For Paradoxa stoicorum in Latin and English translation, Rackham (1942). The glosses to this text, discussed subsequently above, are given in Bayless (2018) p. 59, notes.

Let us inquire, and we find that nearly all the world’s kingdom have been overthrown because of women. The first of them, the happy kingdom Troy, was destroyed because of the abduction of a single woman, Helen. Many thousands of Greeks were slain. The kingdom of the Jews had many evils and deaths because of the very bad queen Jezebel and her daughter Athaliah, queen in the kingdom of Judah. Athaliah had the sons of her son slain so that with his death she herself could reign, but both Jezebel and Athaliah were slain. The kingdom of the Romans endured many evils because of Cleopatra, the Queen of Egypt, a very bad woman. And so on for others. Hence no wonder if the world now suffers from women’s evil.

The Hammer of Witches {Malleus maleficarum} Part 1, Question 6, part 2, Latin text from MacKay (2006) v. 1, pp. 289-90, my English translation, benefiting from that of id. On the relative propensity of queens and kings to engage in war from the fifteenth century to the twentieth century, Dube & Harish (2019). Modern readings of the Malleus maleficarum have obscured that men vastly predominated among witches who were killed, just as today men vastly  predominate among victims of lethal violence.

[7] Orationes pro omni statu ecclesia 28.10-13 (additional commentary). The text begins “Ecclesiastes 7 {Eccl 7}.” It quotes closely but not exactly the Vulgate text of Ecclesiastes 7:26 (in modern numbering). In medieval versions of the Vulgate, this verse ended with “more bitter than death, that is, than the devil {amarior est morte, id est, diablo}.” Bayless (2018) p. 59, notes.

[image] Young Man at Prayer (excerpt). Painting by Hans Memling, made about 1475. Preserved as accession number NG2594 in the National Gallery (London, UK). Via Wikimedia Commons.

Brundage, James A. 1993. Sex, Law and Marriage in the Middle Ages. Aldershot: Variorum.