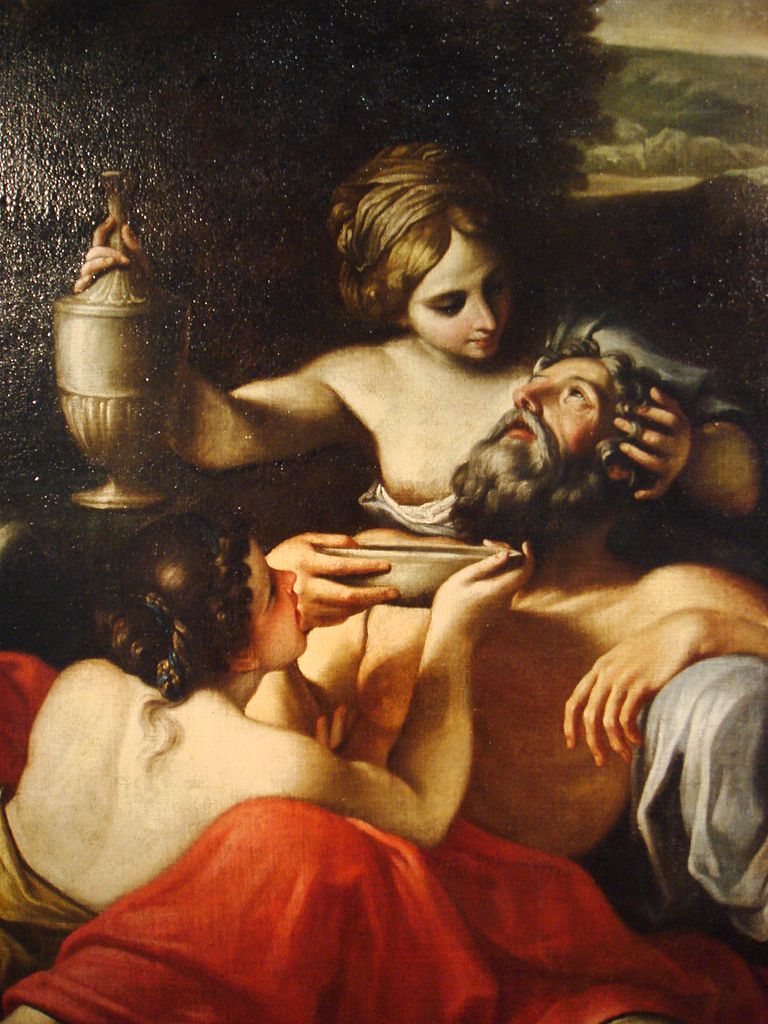 A certain church leader named Hilary conducted a hearing in the city Golgotha of Numskulls. The matter was legion. Lot came to family court to contest an order of child support requiring him to pay 60% of his income to his two daughters who had raped him. Interested parties entered the courtroom.

Solomon’s seven hundred wives and concubines sat together. Royally dressed, Solomon’s mother Bathsheba came in and then left to take a bath outside. The pregnant virgin Mary brought her husband Joseph from the house of David. Lot’s wife sat in the front row and worried that Judge Hilary would deprive Lot of almost all his salt. Elizabeth wanted to know if the payments she would receive would be less because her husband Zachariah had become disabled. The Samaritan woman was there, wondering how many different men could be required to pay her at the same time. Rebecca wanted to know how one man’s income would be divided among multiple mothers. Sarah entered, seeking to learn if angels are under the court’s jurisdiction. Hearing that Lot’s daughter would be getting hefty monthly payments for having Moab, Ruth came to see if she could have a child support order imposed on Naomi. Salome, daughter of Herodias, sought to have a child support order imposed on John the Baptist’s head. Hannah, lacking income, prayed in the court for children. Rachel entered, weeping for her sons being destroyed in the family court system.

Judge Hilary called the court to order. Jezebel was counsel for Lot’s daughters. Jezebel moved that the court recognize, as a preliminary matter, that Lot had always desired to have sex with his daughters, and that Lot should be regarded as their common-law husband. Jesus of Nazareth, counsel for Lot, objected that Lot’s adherence to the commandment “love one another” doesn’t imply incest. Judge Hilary sustained Jesus’s objection: “We note that marital status is irrelevant to the imposition of child support obligations.”

Jesus called Noah to testify on Lot’s behalf. Jesus asked Noah’s questions to qualify him as an expert:

What is the difference between an angry circus owner and a Roman hairdresser?

One is a raving showman and the other is a shaving Roman.

Why didn’t the Israelites starve in the desert?

Because of the sand which is there.

And where did the sandwiches come from?

Ham and his descendants bred and mustered there.

Satisfied with Noah’s answer, Jesus entered scripture into the court record that showed that Noah was the inventor of wine and had experience passing out naked and drunk. The court accepted Noah as a qualified witness. The crowd that now filled the courtroom began talking aloud.

Cain said Noah isn’t able. Isaac laughed. Eve felt tempted to get to know Noah. The Witch of Endor saw Noah under the waters. Gomer, wife of Hosiah, said Noah had gotten her drunk and raped her. Potiphar’s wife said, “Me too!” Tamar claimed that Noah neglected to pay prostitutes their full fees. A dove cooed that Noah had harassed her and made her feel unwelcomed. Shepherds blamed Noah for allying with Cain and fencing off part of their grazing land. The woman at the well said Noah never offered her a drink. Ham said Noah cursed his son Canaan for no good reason. A flood of others in the courtroom and on social media joined in denouncing Noah. A chant began: “Say no to Noah, say no to Noah, say no to Noah….”

Judge Hilary angrily arose and screamed, “You shitty deplorables! Where do you think you are? This is no Neanderthal football stadium. This is my court. Shut the fuck up!” The courtroom settled into abashed silence.

Jezebel began questioning Noah. How often do you drink wine? Do you prefer to drink by yourself? Were you grateful that your sons Shem and Japheth came to you when you were drunk and naked? Do you recognize that those who refuse to exalt the best interests of the child should die by the sword? She then turned to Judge Hilary and said that there was no need for further questions.

Jesus arose and said to the court, “Just as it was in the days of Noah, so too it will be when justice flows down like flood waters and righteousness like a mighty torrent.” Jesus then turned to question Lot.

Judge Hilary interrupted Jesus, “Enough. What is truth? And what’s best for women and girls? Isn’t it in the best interests of Lot’s daughters to get monthly payments from him?” Jesus stood before her and remained silent for a long time. Then he said, “Remember Lot’s wife.”

Adam leaned away from Eve. Job cried out to the Lord. Paul declared God’s grace to be sufficient. Abraham promised to rescue Lot even while not knowing how. Jacob sought a ladder to escape from family court. John the Baptist lost his head from such tyranny. David wept for his son Absalom. Rahab left to hang a red cord outside her window. Moses could only stutter. Peter fumed and look ready to assault the judge. The Ethiopian eunuch praised God. Isaac went to gather wood to build a fire for himself. Isaiah foresaw fatherless children. Jeremiah denounced the judge as foolish and senseless, and predicted calamity upon the nation. Joseph of Arimathea promised to do all he could for Lot.

Mary was stunned, Sarah laughed at what was done.
When all had been settled, they returned to their homes.

The source account of Lot’s daughters raping him is Genesis 19:30-38. Scholars have tended to obscure that Lot’s daughter’s raped him. Consider:

the disappearance of Lot’s wife and sons-in-law triggers an act — incest — that, while it might be justified by the strict logic of patriarchy, is certainly open to misinterpretation and may be better not left to the imaginary construction of readers.

Malamud (2011) p. 154 (emphasis on “not” from the original). Cena Cypriani attests that many medieval readers imaginatively engaged with the Bible. The logic of gynocentrism unjustly suppresses recognition that women rape men. The above imaginary construction of Lot’s daughters seeking child support payments after raping Lot should not be interpreted to trivialize women raping men or pervasive anti-men sex discrimination in family courts. For a thorough, factual analysis of alimony, child custody, and child support laws, see Real World Divorce.

Cena Cypriani is a short Latin prose work that in the modern period has been regarded as bizarre. It consists of about 1500 words. Bayless (1996) p. 19. Doležalová summarized:

It describes a wedding feast organized by king Joel in Cana, Galilee. The king invites many guests – characters from different parts of the Bible and also from the apocryphal Acta Pauli et Theclae (APT). They sit down, accept special dress, cook for themselves, eat, drink, some of them fall asleep, others are entertained, and then they all go home in a festive procession. The next day they return with presents for the king, but as it is discovered that something has been stolen the day before, they are investigated and tortured, until the king decides that only one of them, Achan, should be punished, and so they (including Jesus) kill him and bury him before they return home. After each of the activities is shortly introduced, an enumeration of what the guests did, ate or wore — a list of the Biblical characters and their attributions — follows

the focus of the story is the inventories of characters and their actions … The text is, in effect, an animated catalog of symbols and correspondences

A certain king, Joel by name, organized a wedding in the eastern region, in Cana of Galilee. To this wedding, many were invited. Thus those, who had earlier bathed in the Jordan, came to the feast. At that time Naaman cleansed, Amos sprinkled water, James and Andrew brought hay. Matthew and Peter lay down, Solomon prepared the table, and the whole crowd reclined at various places. But when the place was already full of the reclining ones, those who arrived later, all, as they could, looked for a place for themselves. So Adam, the first of all, sat in the middle, Eve on leaves, Cain on top of a plough, Abel on a milk churn, Noah on an ark, Japheth on bricks, Abraham under a tree, Isaac on an altar, Jacob on a rock …

Latin text of Modesto and English translation from Doležalová (2017) p. 46.

During the Middle Ages, Cena Cypriani was rewritten at least four times and prompted at least one extensive written commentary. Hrabanus Mauris, abbot of Fulda and then Archbishop of Mainz, rewrote the Cena Cyrpriani about 855 to create a work known as the Cena nuptialis {Marriage banquet}. Cena nuptialis, which survives in 18 manuscripts, “made the allegory clearer and the narrative more rapid and coherent.” Bayless (1996) p. 39. In Rome in 876 or 877, Johannes Hymmonides (also known as John the Deacon) recast Cena Cypriani into verse. Johannes followed the original closely. Probably about 1050, the monk Azelinus of Reims wrote another version in verse for the Emperor Henry III of Germany. That version is known as Cena Azelini. Another rewriting of the Cena Cypriani occurred perhaps at Arras about 1200. The French Benedictine monk Herveus Dolensis (also called Herveus of Bourg-Dieu or Hervaeus Burgidolensis) wrote a lengthy commentary on Cena Cypriani about 1150. That commentary survives in four manuscripts.

Cena Cypriani was regarded in medieval Europe as both amusing and useful. Well-known throughout the Middle Ages, Cena Cypriani survives in whole or in part in at least 104 manuscripts. These manuscripts apparently was read or copied mainly in monasteries. Cena Cypriani seems to have functioned as a tool, or perhaps a game, for improving biblical knowledge. Not confined to monasteries, Cena Cypriani was known as the highest levels of learning and political power. Peter Abelard and Hugh of St. Victor both refer to it. Hrabanus Maurus, who rewrote it, was an eminent poet and theologian. Copies of Cena Cypriani were dedicated to kings, emperors, and popes.

As the Waltharius indicates, medieval authors didn’t regard Christian humor to be inconsistent with deep Christian faith. Johannes Hymmonides referred to his rewriting of Cena Cypriani as a “royal jest {imperialis iocus}.” In his poem dedicating his version to Pope John VIII, Johannes wrote:

Whoever desires to discern me, John, dancing,
now listen to my song, attend to the merrymaking:
I will play in running through a medley, formed under God,
that would make Codrus’s belly burst. You, friends, applaud.

Latin text from Bayless (1996) p. 41, my English translation, benefiting from that of id. In his letter dedicating Cena nuptialis to Pope John, Johannes Hymmonides wrote: “take this amusement, Pope John; may you be laughing, if it itself is able to please {ludentem papa Iohannes accipe; ridere, si placet, ipse potes}.” Similarly from id. p. 42. With the starkness that characterizes Proverbs and other biblical wisdom, Burchardus, Abbot of Believaux, in the twelfth century wrote:

Recent studies suggest that Cena Cypriani was within the mainstream of literature from about 1500 to 2000 years ago. Cena Cypriani has parallels with Petronius’s Satyricon 35. Manca (2008) pp. 89-90. Similarities also exist with respect to Apuleis’s Metamorphoses 6.24-5. Casaretto (2006) pp. 239-46. Testamentum Porcelli {The Testament of a Piglet}, written perhaps in the fourth century, provides another parallel. Livini (2011) p. 287.

The questions above concerning the angry circus owner and the Roman hairdresser are from Susan Stewart via Parker (1985) p. 84, n. 5. The questions concerning the Israelites’ food in the desert are from Robert Graves via id. p. 79. I was alerted to the relevance of Five Constipated Men in the Bible via Manca (2008) pp. 94-5. The final quote is the last two lines of Cena Cypriani, in Latin and in my English translation. Some versions read “Mary is stunned {stupet Maria},” but “Mary was stunned {stupebat Maria}” is Modesto’s superior reading.

Doležalová, Lucie. 2017. “Measuring the Measuring Rod: The Bible and Parabiblical Texts within the History of Medieval Literature.” Interfaces 4: 39-58.

One thought on “did Lot support daughters who raped him? Cena Cypriani rewritten”