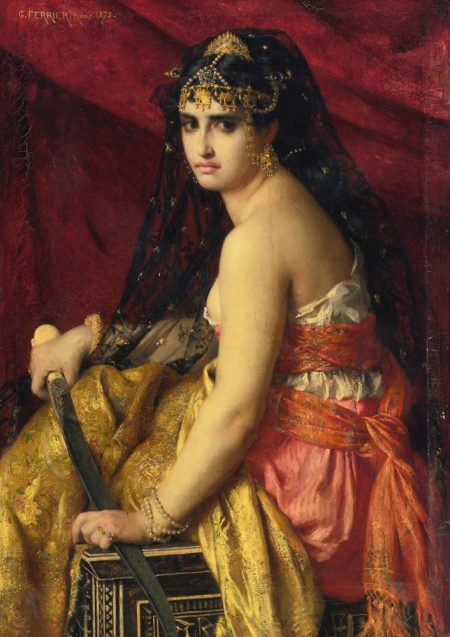 In early-eleventh-century Baghdad, the rich merchant Abū ʿAlī ibn Jumhūr owned a beautiful singing slave girl named Zād Mihr. She had a narrow mouth in which Ibn Jumhūr liked to place his tongue. When he had sex with her, he practiced coitus interruptus (an imperfect form of birth control) to avoid forced fatherhood. She dominated their intimate interaction and also disparaged him. He referred to her as “mistress of her master.”

Ibn Jumhūr became dissatisfied with his personal life. In addition to his singing slave girl Zād Mihr, he also had a wife. Both pleased him much less than they hurt him:

In relation to the two women, he was between two embers, one burning him with her fire and the other branding him with her heat, while he was in a continual state of affliction.

Ibn Jumhūr sent Zād Mihr to his house in Basra and his wife to his house in Wasit. He then enjoyed a life full of pleasure — music, wine, and beautiful women and men who didn’t abuse him.

Zād Mihr became furious with Ibn Jumhūr for sending her away and making for himself a much more pleasurable life. She complained that in Basra she wasn’t being maintained in the style to which she was accustomed:

I am writing to you from Basra, where I am well, in spite of you and your Qatuli nose, which is like the nose of a goat that eats camel thorns. I have written to you a number of letters, and I haven’t gotten a response from any of them. Is this due to your wisdom and feelings, or due to meanness of your spirit? Tell me, to whose care did you leave me in your ill-omened house in Basra? Have you consigned my support to your ruined estates, or to your base steward? By God, I can’t compare your house to anything but the Hizqal Insane Asylum, and I am imprisoned in it like a madman. I have no income except a pittance in rent from your houses — 35 dirhams per month. It is as if I were selling a fragment of glass or chicken shit. The equivalent to that in barley beer wouldn’t satisfy me, and the equivalent in bird lime wouldn’t suffice for me.

perhaps you would like me to leave it with its hair feathers for you, not plucking it, until you return to it and get your mitts on it, reassured that nobody has touched it except you. I say: may a javelin pierce your heart! You want me to let its braids get long? I say: may a sword stab your liver! It absolutely must be cleaned of hair, especially since you left me in need of it and forced me to depend on it. For this I will have to go out singing, which is inevitably followed up with fucking. If there is anything left over from my fee after my expenses, I’ll tuck it away for you. And if, after covering my costs of living, any part of my prostitution fee is left over, I’ll put it away for you. By the life of your kohl-lined eyes, months will not pass before a baby to be swaddled and oiled arrives. I will place its hand in saffron and announce the birth to you in a letter. May God bless you in your pen and us in our inkwell, and may the loser get a stick up the ass.

Saffron was an expensive dye associated with royalty. The closing references to “your pen” and “our inkwell” are metaphors for his penis and her vagina. If they were not going to come together, she was going to force him into fatherhood at great expense to him.

In a subsequent letter, the singing slave girl Zād Mihr further threatened her master Ibn Jumhūr. She wrote to him:

O Ibn Jumhūr, send me living expenses that will meet my needs, and clothing that will please me. If not, by God, I will go out and sing, and put my body up, and ten others with me. And you know that if a slave girl goes out a-singing, someone soon gets in her panties! I’ve warned you, and you know it full well. If you want all mankind to fuck me, I won’t get in the way of your plans. I’ll fulfill all your desires!

You’ve got your own whores who suit you; each week they get a slap in the face. If you get up from one of them, you get off her with twenty farts in your sleeve. But still they brag about you, saying “we were with Abū ʿAlī the Sultan’s merchant, the great and magnificent!” Yes, it suits you, the likes of that stupid female donkey in your house. You can crack a walnut on her head and she won’t dare say a word to you, because she thinks you’re minister Ibn al-Zayyāt or Ibrāhīm ibn al-Mudabbit. As for Zād Mihr, who pounds you like bulgar wheat and grinds you down like flax, well, she’s not something from your spice rack!

After leaning into her sexual competitors and bragging of her vigorous sexuality, Zād Mihr bounced between despair and jubilation:

By God, this house of yours in Basra is nothing so much like a insane asylum, and I am one of the madmen locked inside. May the Lord spare me from my sins as he spared me from the sight of you, for I have become the happiest of people due to your long absence!

After that bipolar behavior, Zād Mihr again complained that Ibn Jumhūr wasn’t adequately providing for her:

from suffering these financial tribulations, I am wearing out my body and losing my youth, waiting on you. And all the while you forget about me, fooling around with your loser buddies in Baghdad, while I am in Basra sitting on reed mats and rags!

She, his slave girl, considered him to be her financial slave. In response to him seeking sexual pleasure, she competitively asserted her own strong, independent sexuality:

Damn you Ibn Jumhūr, burn your eyes! You’ve become a sodomite, friend of slave boys with peach fuzz. God protect me from your wantonness! … By your life, I’m going out to sing and get fucked in Basra, while your boys in Baghdad rent out their wares, and you can be in the middle, like Ibn Hamdūn, the ever compliant. I’m not going to judge your actions, even if you sometimes go after boys and sometimes go after women. By the life of your crooked nose and your kohl-lined eyes and your hair bangs: I can compete with you, blow by blow! If you take up with boys, I’ll take up with young men, and if you take up with women, I’ll enjoy myself with a lesbian. But I’ll surpass you because you aren’t desired unless you’re giving gold, but I’m desired and paid gold for doing it. May the loser get a stick up the ass. … If you fall in love, I will court one who is more beautiful than you. If you marry, I will marry one who is more elegant than you.

While presenting herself as competing equally with Ibn Jumhūr and proving her sexual superiority, Zād Mihr continued to demand expensive gifts from him:

by my life, give me a lute to use with a teak border and ivory inlay, and let its back be set with jewels, so that I may sing with it.

Underscoring the complacency of her material privilege, Zād Mihr then castigated Ibn Jumhūr:

May you be disfigured, O Ibn Jumhūr! How quickly you forget what you used to say to me: “No sleep can satisfy me until I hold it in my hand, then I fall asleep.” Or perhaps you found one greater than it, softer, hotter, and tighter, and that is what has distracted you? Damn you! By my life, tell me the truth about it, even if the truth is something alien to you!

Ibn Jumhūr paid a high price for having his singing slave girl Zād Mihr, even after he tried to get rid of her.

Some men fantasize about having a singing slave girl for pleasure. In reality, many men pay a high price for women like Zād Mihr. Men should study this medieval Islamic literature and other great literature.  Men need to learn from it. Women, too!

The story of the singing slave girl Zād Mihr and her owner Ibn Jumhūr is from the Ḥikāyat Abī al-Qāsim {The Imitation Abū al-Qāsim}, a work written in Arabic and attributed to al-Azdī. It probably was originally written in Baghdad between 1008 and 1020. St. Germain (2006), Selove (2012), and Selove (2016) (a revised version of the former) provide more information about the work.

St. Germain provides an English translation of the full text of Ḥikāyat Abī al-Qāsim, along with extensive notes. For the story above, see St. Germain (2006) pp. 288-93. Selove translated the second of Zād Mihr’s letters quoted above in Selove (2016) pp. 45-6. For the quotes above, I’ve drawn on both translations. I constructed the quotes from the two translations to best reflect the context as I understand it and to be most readable for a general audience. Except as noted, the quotes in the two translation and my synthesis differ little semantically.

In addition to Zād Mihr’s disparagements of Ibn Jumhūr documented above, she also disparaged him for practicing coitus interruptus:

When he had relations with her, he practiced coitus interruptus. She got angry one night and pushed him off herself. She said, “What need does the toothless woman have for a toothbrush?”

[image] Judith. Oil on canvas painting by Gabriel Joseph Marie Augustin Ferrier, 1875. Image via pinterest. The work was produced before 1923, and its author died more than 100 years ago. Acting under U.S. copyright law, I use this image non-commercially to help foster understanding of neglected medieval Islamic literature.