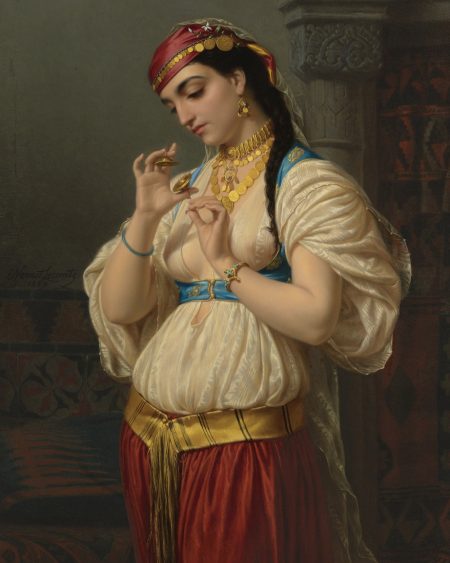 A young man pretending to be an aristocrat arrived at a banquet in eleventh-century Baghdad. A slave girl  — beautiful, highly cultured, and wealthy — was singing there. She enthralled him.

In fashionable devotion to the singing slave girl, the young man refrained from eating even though he was dying of hunger. He became inebriated from drinking sweet date wine. Then the love-struck young man saw roses. He grabbed them and ate them. The slave girl whispered behind her tambourine to her master:

By God, I beg of you, call for something for this young man to eat, or else his shit will become honeyed rose jam!

The singing slave girl cared for the foolish young man.

The young man was dressed in only a brocade robe. The night was cold. He began to shiver, and his teeth chatter. He said to the slave girl, “I want to embrace you.” She said to him, “You poor thing, you need to embrace an outer garment more than to embrace me, if you had any sense!” She had worldly good sense. He was a foolish courtly lover. He left deeply wounded by her sensible words.

As foolish courtly lovers do, the young man then wooed the slave girl with letters. He wrote to her of “his love and his follies, his insomnia at night, his tossing and turning in bed as if he were lying on a hot frying pain, and his inability to eat and drink.” The shrewd narrator of the story added that the young man wrote “of such like vacuous drivel, which has no use or benefit” to men in love. The singing slave girl naturally rejected the vacuous drivel of the courtly lover.

Badly educated, the courtly lover turned to literary imagination and poetry. He wrote to the slave girl:

Since you have forbidden me to visit you, or to ask you to visit me, then order, by God, your specter to visit me at night, and quench the heat of my heart.

Guide me to your specter so that
I may claim a rendezvous with it.

If your abstinence is a come-on,
show your specter the way to me.

The young man sought to travel to meet the slave girl’s spirit, or to have it come to him. In worldly love, a spirit is a poor substitute for a flesh-and-blood woman.

With compassion and boldness, the singing slave girl taught the foolish man actually how to achieve his aim. She sent a message to him:

Woe upon you, you poor thing, I’ll do something for you that is better for you than my specter visiting you at night. Put two gold coins in a purse and I’ll come to you and that will be that.

In courting sophisticated slave girls in medieval Baghdad, poetry was much less useful than gold coins.

As the above story indicates, the eleventh-century Islamic world had both the intellectual capability and freedom to criticize the men-debasing ideology of courtly love. In western Europe, benighted scholars have ignorantly celebrated courtly love for about a millennium. Study of medieval Islamic literature might help to spur a true renaissance and enlightenment.

The above story is from the Ḥikāyat Abī al-Qāsim {The Imitation Abū al-Qāsim}, a work written in Arabic and attributed to al-Azdī. The work and its author are closely associated with Baghdad. It was probably originally written between 1008 and 1020. The work has survived in a unique codex manuscript now held in the British Library as MS. ADD 19, 913. That manuscript, which isn’t the author’s autograph, includes a marginal note dated 1347. St. Germain (2006) pp. 10-14.

St. Germain provides an English translation of Ḥikāyat Abī al-Qāsim, along with extensive notes. For the story above, see id. pp. 287-8. The quotes above are from id., with some insubstantial changes for clarity.

The singing slave girl was Zād Mihr, a historically attested woman. The man in love with her isn’t named. He is described as “a young man who pretended to be an aristocrat of Baghdad.” The young man’s letters to Zād Mihr include symptoms of lovesickness recognized from antiquity.