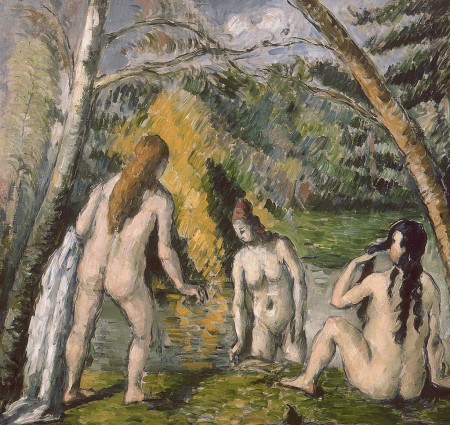 The most revered poem in classical Arabic literature is the Muʻallaqah of Imruʼ al-Qays. That poem contains outrageous male sexual memories. It generated a story in which nude, bathing maidens pelt with mud a leading classical Arabic poet. From a similar setting of nude, bathing maidens, a medieval European fabliau described a knight’s courtly behavior rewarded with magical power over women’s vaginas and anuses. The classical Arabic story is less interesting as a possible influence than as a touchstone for European cultural vibrancy.

The classical Arabic story is both intricately literary and realistically mimetic. The famous classical Arabic poet al-Farazdaq encountered outside the city nude maidens bathing in a pond. The maidens demanded that he tell them the story about Imruʼ al-Qays and nude maidens bathing in a pond. Al-Faradaq enacted the story of collecting their clothes and refusing to return the clothes until the maidens emerged naked from the water for him to see. But the maidens tricked him into turning his back. Then they ran at him. They pelted him with mud and covered his face, including his eyes, with mud. The maidens recovered their clothes and verbally abused al-Farazdaq. This story, along with the poetry of Imruʼ al-Qays, was preserved within the wide-ranging corpus of classical Arabic literature.[1]

The medieval European fabliau Le Chevalier Qui Fesoit Les Cons Parler {The Knight Who Made Cunts Talk} has a similar setting and similar cultural vibrancy. While traveling through the countryside, an impecunious knight and his squire came across nude maidens bathing in a stream:

Their clothing, right down to their shifts,
they’d hung upon a branch and left
garments made all of beaten gold
and worth a fortune, truth be told [2]

The knight’s squire grabbed the maidens’ clothes and galloped away. The knight pitied the pleading maidens and raced after his squire:

“Hand over now, so help you God,
those clothes; you’ll not carry them off!
To shame these damsels and to scoff
at them would be the height of baseness!”
“Consider rather what the case is,”
Huet {the squire} replies, “and don’t be silly.
They’re worth a hundred pounds, now really,
for richer garments I’ve not seen.
That sum within the next fourteen
years and a half you’d never win,
for all the tournaments you’re in.”

The knight insisted that he would return the maidens’ clothes, for that was the honorable thing to do, no matter how desperately poor he was. The knight thus gave the maidens back their clothes. He didn’t even seize the opportunity to see them naked.

For the knight’s great courtesy, the maidens rewarded him with extraordinary power over women’s bodies. One maiden promised:

Whatever way your path may turn
every woman and female beast
who’ve in their heads two eyes apiece
whom you meet, if you call, their cunts
will have to answer you at once.

The knight was ashamed at that promise. Then another maiden promised him:

Since it was right by reason’s laws
that if the cunt for any cause
should happen to be too obstructed
to answer promptly as instructed,
the asshole should speak in its place,
no matter what shame or disgrace
may come of it, once you have called.

The knight thought that the maidens were mocking him. He returned to his squire and explained how his courtesy had been rewarded with mockery. The squire reminded him that his courtly behavior was foolish.

The low bodily magic that the maidens bestowed on the knight ultimately vindicated his courtesy. The knight and his squire encountered a priest. The squire urged the knight to ask the cunt of the priest’s mare where he was going. The knight inquired of the feminine orifice in the mare’s hide:

What is your master’s destination?
Hide nothing, Mr. Cunt; tell all.

The mare’s cunt responded that the priest was going to visit his concubine. He intended to give her a large amount of money to buy a dress. When the priest heard the revelation of his mare’s cunt, he was struck with fear. He dashed away, dropping his money bag and leaving his well-equipped mare. The knight and the squire were delighted to acquire the priest’s wealth.

When the knight and squire came to stay at a count’s castle, they received further benefits. They received a warm welcome and a large meal. The knight was bedded in a luxurious chamber. Even better, the count’s wife told “one of her maids-in-waiting with charms beyond enumerating”:

if you are willing, go and spend,
for company and for delight,
this night in bed with that same knight
whose coming made us all so glad.
Go lie beside him all unclad
and serve him if he feels the need. [3]

The maid, who dared not object to her lady’s request, went to the knight’s bed, took off her clothes, and stretched out beside him. The knight awoke to the feel of her body. If she were he, and then were now, and they were in college, he might be expelled for sexual assault. But in this medieval fabliau, she wasn’t going to rape him:

I’ll do no harm, but satisfy
you. Come, and I’ll massage your head.

He held her close in his embrace
and kissed her on the mouth and face,
then put his hands on and caressed
her most delicious, lovely breast,
and, moving down, began to stroke
her cunt, and, as he did, he spoke:
“Now speak up, Mr. Cunt, because
I’m curious to know the cause
that brought your lady here to me.”

The maiden’s cunt revealed that the countess had sent her to the knight’s bed.[4] The maid, hearing her cunt speak, jumped up and ran away naked, clutching her chemise.

When the countess heard her maid’s story, she plotted to thwart the knight’s bodily power. At the meal the next day, the countess revealed that the knight had the power to make cunts talk at his command. All were astonished and impressed. The countess then proposed to wager a large sum of money that her cunt would not be so uncivil as to speak even if the knight commanded so. The knight accepted that bet. The countess then went to her room and stuffed her cunt with cotton. She returned to the dining hall for the test. The knight asked her cunt why she had gone to her room. No sound was heard in reply.

Fearing all was lost, the knight turned to his squire for advice. The squire responded wisely:

If Cunt can’t speak, then in that case
the butt will answer in its place.

The knight asked the countess’s asshole why her cunt wouldn’t respond. Her asshole explained:

it can’t sir,
because it has it muzzle full
either of cotton or of wool
the lady stuffed into her crack
locked in her room a while back.
Had not that wadding been inside,
it certainly would have replied.

Stuffing her cunt full of cotton was unfair. That perhaps was ordinary monthly behavior, but inappropriate in these particular courtly circumstances. The count told his wife to go and take the cotton out of her cunt and then return to the hall. When she did, the knight successfully had her cunt recount how it had been blocked. The knight thus collected a large amount of money from the unrigged wager.

Both classical Arabic poetry and medieval European fabliaux show freedom of expression and imaginative vitality now largely inconceivable in respectable society. In the context of Imruʼ al-Qays’s outrageous sexual exploits, the pelting of al-Farazdaq with mud plausibly represents a backlash against men’s sexual interests. Lovely maidens rewarding a knight with the power to make cunts and assholes talk redeems the knight from subordination to women in courtly love. Both stories thus show cultural dialogue about interests and values. Today, men are pelted with mud and urged to uphold medieval ideals of men’s servitude to women. Only marginal voices dare venture different perspectives. That indicates cultural stagnation.

[1] The story of al-Farazdaq is translated from Arabic in van Gelder (2013), “Lives of the Poets: al-Farazdaq Tells the Story of Imru’ al-Qays and the Girls at the Pond,” pp. 123-6. The story is probably from the eighth or ninth century GC.

[3] Historically, women have commonly served as pimps and go-betweens.

[4] In the Harley MS 2253 version, the knight asks the maiden’s cunt whether she is a virgin. Her cunt responded:

Not at all, lord, certainly!
She’s had more than a hundred
Balls at her rear
That have split her banner!

That response provided in medieval times greater motivation for the women’s embarrassment.