A weeping-dog tale has traversed wide expanses of space and time. This is how the story goes. A lovely, virtuous woman had a husband.  Her husband had to leave town on a business trip.  A man deeply in love with the virtuous woman exploited her husband’s absence to plead his desire to her.  She refused to have sex with him.  In despair, the suitor felt that he would die from lovesickness.  He sought a go-between, a gossipy, know-everyone old woman, to win for him his desire.  For a large fee, the go-between agreed to bring about that union.

The go-between succeeded with guile.  She fed a female dog meat with pepper.  The dog ate eagerly and began to weep from the heat of the pepper.  The go-between took the weeping female dog to the woman and told her that the weeping dog had been a beautiful woman.  Because that beautiful woman had refused to take a lover, she was transformed into a dog, or so the go-between said.  The virtuous woman hearing that tale was deeply frightened.  She explained that she had rebuffed a importuning man.  She pleaded with the go-between to find that suitor and bring him to her.  The go-between, advancing her material interests at each step, then arranged a tryst between the virtuous woman and her suitor.[1] 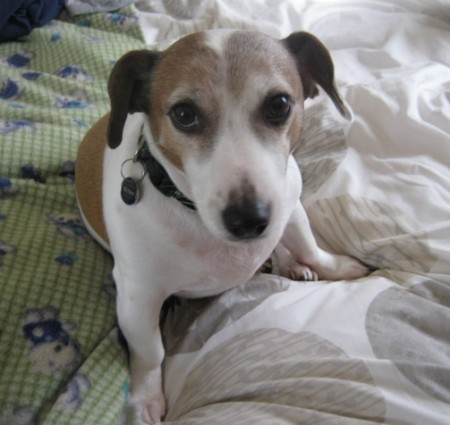 Before the use of printing presses, versions of the weeping-dog tale spread from India across western Eurasia and northern Africa.  The weeping-dog tale almost surely originated in India probably some time before the sixth century.  It was incorporated into Sanskrit texts, Persian texts, and Arabic texts.[2]  It also was included in a twelfth-century Latin text in Spain and an English fabliau dating to the thirteenth century.  It was incorporated into a fifteenth-century Arabic text from North Africa.  Particularly as part of the Sindibad / Seven Sages corpus, the weeping-dog tale spread widely across western Eurasia.[3]

The weeping-dog tale was morally recast in an eleventh-century Sanskrit text Kathasaritsaga.  When the go-between told her story of the weeping-dog, the virtuous woman, named Devasmitâ in this version, recognize the attempt to dupe her.  Devasmitâ ordered her maid to pretend to be her.  Suitors, who in this version numbered four, one by one visited the maid disguised as Devasmitâ.  The maid plied the suitor with a drugged drink.  Then the suitor was harshly abused:

the maids took away his clothes and other equipments and left him stark naked; then they branded him on the forehead with the mark of a dog’s foot, and during the night took him and pushed him into a ditch full of filth. [4]

Each abused suitor told the other suitors, who were his friends, that he had been robbed on the way, so that they would be abused like he had been. The go-between was similarly drugged during a visit.  Devasmitâ cut off the go-between’s ears and nose and threw those bodily organs into a filthy pool.  In this version, the virtuous wife remained sexually virtuous,  but led acts of extreme cruelty.

She started to hit him on the head with her slipper, while, for his part, he protested his innocence, swearing that never in his life had he played her false or done what she had accused him of doing.  He continued to swear by Almighty God and she continued to strike him, weeping, shrieking and calling: “Help me, Muslims!”  He put his hand over her mouth, but she bit it and he then began to cringe before her, kissing her hands and feet.  She was not prepared to accept this, and went on slapping him until she winked to make the old woman stop her. [5]

The version of the weeping-dog tale in which the husband is the ultimate dupe is much more common than the simpler version in which the virtuous wife is the dupe.[6]

The weeping dog tale deserves to be remembered.  It provides insight into fundamental moral forces in human communication.

[1] The version of the weeping-dog tale told here is a slightly streamlined version reflecting typical elements in the tale.  The tale has been called the tale of the weeping bitch.  That the dog is female contributes to the claim that it comes from a transformed woman.  However, “bitch” has a derogatory connotation similar to that of “males” used as a substitute for “men.”  Hence rather than referring to the tale as the weeping-bitch tale, I refer to it as the weeping-dog tale.

[6] Clouston (1884) p. 84, comments on no. IX.  Of the versions mentioned above, the simple version occurs only in the Persian Book of Sindibad and in the Sanskrit Shuka Saptati.

[image] sad-looking dog, thanks to AshHughes