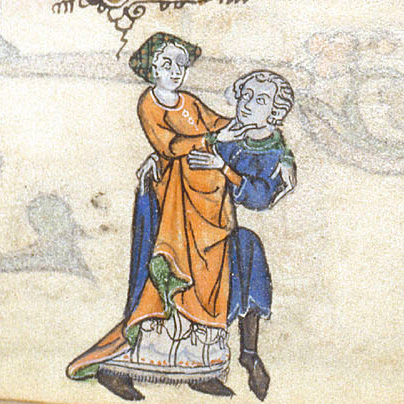 A figure of media in medieval Andalusan literature is an old woman go-between.  In Judah al-Harizi’s Tahkemoni, Heber the Kenite encountered a go-between:

a crone, prune-face, features and limbs and what-not-else displaced, came apace, a wispy veil drawn over her face, foulness to perfection, incarnate evil: Fate must have hauled her straight up from the Devil. [1]

The go-between flattered Heber’s self-esteem.  Then she offered him a dream:

rise from the dust to a nubile, doe-eyed maiden faint with lust.  She is supple, her body warm and moist, well-spiced, glistening like amethyst, pure, holy, blest.  Her eyes are two lions, her teeth strung pearls, each breast a trembling fawn.  On, sir, on!  Feast your eyes on each succulent part and feel your senses fall apart; ah me: thou shouldst go mad at the sight of thine eyes that thou shouldst see.  Oh, happy the man who clasps her to his side, who mounts this chariot to ride; oh trebly sweet the lot of him who bows, falls down, and lies between her feet. [2]

That account is full of deceit.  The go-between pulled a marriage switch for an ugly old witch.  So also earlier told Judah ibn Shabbetai about the dismay of Zerah.  Heber, disabused after the nuptial execution, abusively recounts the outrages he suffered.[3]

Al-Harizi’s text draws meaning from citations and allusions to the Bible.  They would have saved Heber from his delusion, if he had been keenly discerning.  The man who lies between a woman’s feet in the biblical book of Judges is the general Sisera.  He doesn’t experience joyful sex in the wedding bed.  The wife of Heber the Kenite hammers a tent peg through his skull, and he falls dead between her feet.[4]  Heber claims to have delivered blows to his new wife and then fled for his life.  The teller of the tale said:

Hearing Heber the Kenite’s misrepresentations, his mad concoctions, his ludicrous fabrications, I laughed my fill, then bade him goodbye, and off went I; and off went he — dreams, wit, and wondrous falsity. [5]

The reality of women’s guile and prevalent violence against men made for laughter that medieval culture allowed.  Now even men’s dreams are disavowed.  How can men still be sped to the marriage bed?

[2] Id. pp 74-5.  The go-between proposes a 2000 coin price for Heber the Kenite to wed the maiden.  The italicized text quotes Deuteronomy 28:34, which is a curse.  That curse thus foreshadows the bride that Heber the Kenite will receive.

[3] Heber the Kenite, unlike Jaume Roig, resolved from his bad womanly experience to avoid marriage:

By all the prophets’ lives, he shouted, not a word of wives, though you bore a command stamped by God’s own hand!  One horror will suffice: never twice!

One might well see in this gate a quintessential example of literary coarseness towards women as women, call it chauvinism or what you will.  One might have good reason.  The definition of womanhood here is that of subservient wife and sexual partner.  She must be beautiful.  She must have means.  She may be beaten.

Some {those bad men} may laugh; others {good men who love their mothers} will not.

Id. p. 458.  This is similar male rhetorical posing to that of Lacy in considering the fabliau La Dame Escoilliee (see note [4]).