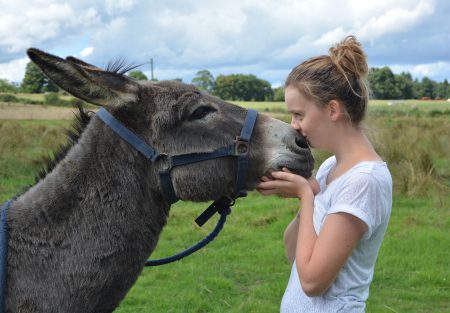 In twelfth-century England, the donkey Burnel thought himself destined to become a bishop. Burnel had a traumatic childhood and low masculine self-esteem. Yet a donkey could offer more in love than could a man. Recognizing the value of seminal action, Burnel imagined himself being a bishop acting as a horse rather than as a mule.

A mule is the offspring of a male donkey and a female horse. A mule thus indicates a male donkey’s sexual broad-mindedness and vigor. Wrongly stereotyped as being stubborn, scientific testing suggests that mules are more flexible learners than are donkeys, horses, or dogs.[1] Male mules, however, are sterile. No matter how much erection labor a male mule performs for a female, the female will not get pregnant. Mules thus cannot become biological fathers.[2]

The donkey Burnel had no interest in becoming a spiritual father like a mule. In considering the role of bishop, Burnel pondered the two-horned bishop’s hat known as a mitre. In medieval Europe, an abbot could also wear a mitre. An abbot, however, lacked the sacramental capabilities of a bishop.[3] Burnel respected only fully capable fatherly horns:

No mitre nor its horns shall crown my head,
unless there’s present what accompanies it.
When all things else are lacking which belong,
what joy is there to hold the empty form?
Full bishop I shall be, for I don’t want
his honors as a mule, but as a horse.
…
The mule has genitalia, yet he
is always sterile and can’t reproduce.
So those who have no office, but the name,
have nothing but insignia to bear.
Forbid that I should rise and take such horns
as various ones have for themselves assumed.
…
I’d rather be content with both my ears
than have two horns like those appear on me.
In what they raise up, in that they’re closed off,
so mule and abbot in esteem are equal.
A lappet on an abbot’s head is worth
what testicles that hang from mules mean.
Those who in being bishops are curtailed
are made like abbots with emasculated mitres.

Horns have long been symbols of strength, virility, and cuckolding. Burnel regarded a mitre’s horns, like masculine genitalia, as beautiful and full of grace as they are, to be efficacious signs when linked to seminal action.

In medieval Europe, women and men of religious orders engaged in seminal action. According to Burnel, the secular canons thrust themselves into advocating a double duty of seminal action:

So this they strongly teach should be
observed by all through all posterity:
that as the ancient law provides, no one
should lack one girl, but each might have his two.
They love the world and grasp its fading flower,
and keep it watered lest it droop and die.

The secular canons’ self-emptying love had effects on nuns, particularly abbesses, the shepherds of their convents:

Some bear no children, others do; and yet
they hide it all beneath the virgin’s name.
She who is given the honor of a pastor’s rod,
that one gives birth better and more abundantly.
Scarce one of them is found who can’t conceive
till age denies them this ability.

With strong reason that would have warmed the loins of the Talavera clergy, Burnel sought to establish, for himself and others, a new religious order. Burnel’s new religious order would embrace and celebrate efficacious signs of the masculine grace that perpetuates life:

Surviving orders, apart from all delight,
a woman as my mate in lasting bond.
This order was the first, begun in Paradise,
established by the Lord, and by him blessed.
We would that this be kept forevermore
to which belonged my mother and my sire,
in which my entire race has always been,
and if it fail, the human race will end.

Burnel the donkey never become a bishop. The religious order of Burnel was never officially instituted. We call him a foolish donkey, dumber than a dumb ox, yet the soundness of his doctrine continues to resound in banging and bellowing throughout the entire world.[6]

Even in our sterile, mulish times, courageous laymen continue to engage in seminal action. Their efficacious masculinity is essential for the eternal life of humanity. It deserves to be celebrated.

mules are only stubborn because they are smart. Mules know that running into or away from everything isn’t going to work as well as thinking it through. Many people will tell you “Trust your mule.” Mules are sometimes smarter than people and are highly sensible.

[2] Birth control is vitally important for men because crushing sex payments are socially imposed on men who contribute sperm to a pregnancy. However, no other animal species imposes such payments on males.

[3] From about 1125 in western Europe, mitres began to have pointed horns rising on the sides of the head. Cornua (horns) became a popular medieval term for a mitre. Here’s a medieval drawing of a side-horned mitre inserted as marginalia in a manuscript of the Speculum stultorum. Mitres today more commonly have flaps that rise from front and back to meet at a point in the middle. See a review of the history of mitres, Mozley & Raymo (1960) p. 160, note to l. 1683, and symbols of the Office of Bishop.

In what things they excel, for they fall short,
The mule and abbot are in like esteem.
The fillet means the same on abbot’s head
As signs of masculinity in mules.
Those who from being bishops are deprived
The flattened miter does not abbots make.

Id. Above I’ve attempted a clearer and more literal translation of those lines.

A lappet on an abbot’s head is worth
what testicles that hang from mules mean.

In this couplet, the ecclesiastical accoutrement lappet {infula} is separated by only two Latin syllables from testicles {testiculos}. Testicles hang downward in the front of a man’s body. A lappet (tied around the head) typically hangs downward in two strands at the back of the head. The couplet metaphorically compares the abbot’s lappet to a mule’s testicles. That’s an extraordinarily imaginative metaphor. Moreover, the reversals top to bottom in relation to a man’s trunk and back to front in relation to the man’s ventral plane are a microcosm of the “world turned upside down” theme of the Speculum stultorum. On divine folly and the trickster tricked in the Speculum stultorum, Mann (2009) pp. 133-6.

In a grave scholarly failure, the additional couplet doesn’t appear in Mozley & Raymo’s critical edition. While the couplet in omitted in manuscript A (British Museum, MS. Hareian 2422) of the Speculum stultorum, it apparently appears in manuscript B (British Museum, MS. Arundel 23) and manuscript C (British Museum, MS. Cotton Titus A 20), as well as in the fifteenth-century printed editions from Utrecht and Paris. Mozley & Raymo (1960) pp. 9, 15, 16 (notes to 10, Wright’s edition), which identifies and describes the manuscripts corresponding to Wright’s sigla. Suppressing this couplet is part of the oppressive history of obscuring men’s masculine being and denying men’s intrinsic virtue.

The leading scholarly works on medieval beast literature lamentably don’t cover Burnel’s thoughts on a bishop’s mitre, a mule, and seminal action. Having drawn a chronological line at 1150, Ziolkowski (1993) only mentions the Speculum stultorum peripherally. Mann (2009) spends a full chapter on the Speculum stultorum. Yet like medieval scholarship in general, id. shows little consideration for men’s distinctive being and ignores the Speculum stultorum’s striking references to a male mule’s genitals and testicles.

[5] For Ordine de reliquo placet, Regenos translates “I’m pleased to borrow from the group that’s left.” The Latin phrase seems to me to carry a pun with the natural requirement of a species’s survival. To convey that sense, I’ve translated the Latin as “Surviving orders, apart from all delight.”

[6] Thomas Aquinas is today the most famous and influential medieval theologian. Aquinas’s fellow students, however, reportedly called him a “dumb ox.”  Albertus Magnus, an eminent philosopher and theologian of Aquinas’s time, reportedly stated:

We call him the dumb ox, but he will make resound in his doctrine such a bellowing that it will echo throughout the entire world.

[image] Woman kissing donkey. Image thanks to Jaclou-DL, who generously made it available on pixabay under a CCO Creative Commons license.