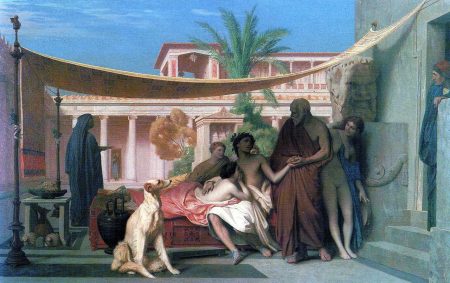 Encolpius, seeking to get a dinner invitation, declaimed to the feminist professor Agamemnon at a university where a feminist declamation had just finished. He declared:

“This surely is the same type of madness goading our professors of feminism when they disparage men for crying:

‘These wounds I have sustained for our country’s liberty. This eye I have forfeited in your service. Give me a helping hand to lead me to my children, for my legs were hamstrung to prevent escape when I was drafted as a soldier and taken prisoner. Because of that, my legs cannot now support my body’s weight.’

Utterances even as sexist as this we could stomach if they advanced students on the path to feminism. As it is, all that men achieve with their bombast and their noisy, vacuous epigrams (“Men are human”) is confusion. When youngsters set foot in university, they find themselves transported into another world. This is why I believe that our hapless youngsters are being turned into total idiots in our universities of feminism. Their ears and eyes are not being trained on everyday feminist reality, but on female pirates in chains on the seashore, or on women thought-leaders signing edicts bidding sons to decapitate their fathers, or on oracular responses in time of plague urging the formation of intersectionality in gender equality among elementary school teachers. They must learn these honey-balls of phrases, every word and deed sprinkled with poopy-talk seeds and says-a-me.”

“Students fed on this fare can no more acquire good sense than cooks living in the kitchen can smell feces. Forgive my saying so, but you professors of feminism more than any others have been the death of admirable truth-seeking. Your lightweight, empty bleatings have merely encouraged frivolity, with the result that serious inquiry has lost all its vigor and collapsed. In the age when Aesop and Euripides devised the necessary language for their verse, young persons were not being confined to set speeches. When Juvenal and the seven lyric poets were too modest to use Homer’s verses in singing their songs, no professor in his ivory tower had as yet expunged ingenious creativity. Not that I need to cite the poets for evidence. As far as I am aware, neither Plato nor Demosthenes had recourse to this kind of exercise. Lofty style, if I may say so, is also modest style. It is never blotchy-faced and obese. It rises supreme by means of its natural beauty. But of late this flatulent, disordered garrulity of yours has decamped from Judith Butler to all feminist professors. A wind as from some baleful ass has descended on the eager spirits of our youth, as they seek to rise in social status, and rational speech has been stopped in its tracks and stuck dumb, once its norms were perverted. In short, who in these later days has obtained the renown of Herodotus or Matheolus?”

Agamemnon refused to allow me to deliver in the colonnade a declamation longer than the one that had raised a sweat on him in the school. “Young man,” he said, “your speech reflects uncommon taste, and you are uniquely gifted with good sense. I shall not withhold from you the secrets of the trade. It is hardly surprising that professors are at fault in these school exercises. They go along with lunatics and play the insane. Unless their speeches meet with the approval of their young students, they will be in the situation described in Cicero’s words, ‘he is left as the only one in his school.’ Our plight is like that of flatterers on the stage who cadge dinners from the rich. Their chief occupation is what they think will please their hearers most. They obtain their aim by laying traps for ears. Likewise, unless the professor of feminism turns angler and baits his hook with the morsel which he knows the fish will bite, he stands idle on the rock with no hope of a catch.”

“So what is the moral? Parents deserve censure for refusing to allow stern discipline to ensure the progress of their students. To begin with, they sacrifice their young hopefuls, like everything else, on the altar of ambition. Then, in their haste to achieve their goals, they bundle them into feminist-journalist jobs while their learning is still undigested. It all starts when children are still in cradles. Their parents swaddle them with feminism, believing that feminism is the be-all and end-all. If they allowed children to struggle step by step, making the youngsters work hard, and if students steep themselves in serious study, order their minds with the maxims of philosophy, score out with ruthless pen what they had first written, lend patient ears to the models which they wished to imitate, convince themselves that nothing admired by students can be of intrinsic worth — then the lofty truth-seeking of old would maintain its weight and splendor. But as things stand, as young persons they fool around at university. Then they go on to attract derision as feminist-journalists. What is more shameful than either of these, in old age they are unwilling to acknowledge the defects in their education.”

A clothes-dealer standing nearby approached Agamemnon and said: “My little boy is growing into a disciple of yours already. He can now say four types of genders. If he manages to keep himself alive, you will have a little servant at your side. Whenever he has a spare moment, he never lifts his head from How Jack oppressed Jill. He is clever and comes from a good family, even though he is too fond of pretty birds. I killed three of his goldfinches just lately and said that a weasel had eaten them. But now he’s found another hobby, collecting and wearing dresses with great pleasure. He’s trampling all over those little Greek authors and beginning Latin with no bad appetite, even though his master is conceited and won’t stick to one thing at a time. The boy comes asking me to give him some feminist literature to copy, because he doesn’t want to work. He has another teacher who doesn’t know much literature, but has an inquiring mind, and can teach you more than he knows himself. He often visits us on holidays and is happy with whatever food you put before him. A little while ago I bought the lad some books with red-letter headings in them. I want him to get a smattering of law to manage our property. That’s a matter of bread. He’s had enough feminist literature to have stained him for life. If he backs away from that, I’ve decided that he must learn a trade as a barber, or an auctioneer, or at least a lawyer — some career he can follow to his grave. So I drum into him every day: ‘Primigenus, believe me, whatever you learn, you learn for yourself. Look at Philero the lawyer. If he hadn’t learned, today he wouldn’t be able to keep the wolf from his door. Not long ago he used to carry loads around on his back and sell them. Now he holds himself out well even against Norbanus. Literature is a real treasure, and gynocentric culture never dies.'”

Like Agamemnon, Eumolpus had received a fine feminist education. Recognizing his eminience, Philomela approached Eumolpus, saying that she wished to entrust her children to his sage counsel and upright nature. She was putting herself and her aspirations in his hands. He was the only person in the entire world who could give the young ones a good grounding by teaching them sound principles every day. In short, she was leaving her children in Eumolpus’s residence to listen to his discourse. This was the only legacy that she could pass on to her children.

She was as good as her word. She left her stunningly beautiful daughter and the girl’s adolescent brother in Eumolpus’s apartment, on the pretense that she was off to the temple to recite her vows. Eumolpus, a man of such chaste disposition that he regarded any man as a likely lad, did not delay in inviting the girl to some sacred sodomy. But he had told everyone that he was gout-ridden and suffering from enervation in his loins. He was in danger of undermining the entire dramatic performance if he failed to keep the pretense intact. So to maintain plausibility of the deception, he entreated the girl to sit on his “upright nature.” He instructed Corax the servant to crawl under the bed in which he lay and then do press-ups on floor, thus pushing upwards his master’s loins. The servant obeyed the instruction in slow measure, alternating his movements with the girl’s practiced technique. Then, when things were reaching their climax, Eumolpus loudly urged Corax to speed up the service. Between the servant and the girlfriend, the old fellow in bed seemed to be riding up and down on a see-saw.

Encolpius himself contributed to schooling these students in feminism. Encolpius explained, “I did not want to be flaccid in teaching practice, so while the brother was watching his sister’s in-bed robotics through the keyhole, I too made my approach to him to see if he would submit to my offense. The boy was well-schooled and did not demur.”

Compared to how it existed under Socrates and Plato, academia have changed little, except for the development of feminist themes. The elites who rule the world have declared, “The future is female.” Parents must thus prepare their children for female supremacism. Sending students to universities to be schooled in feminism is auspicious preparation for female supremacism. 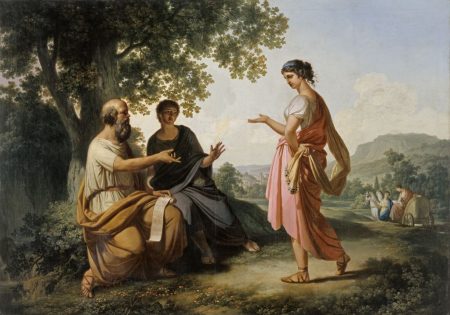 The Latin quotes above are from the Satyricon, written about 65 GC and attributed to Petronius Arbiter. The Latin text is from Heseltine & Rouse (1913), freely available online. The quotes are specifically from Satyricon 1-4, 46, and 140. Almost all of the English text tracks those quotes and is based on the translations of Heseltine & Rouse (1913) and Walsh (1996), with adaptations and some small but significant changes.

Here’s background on ancient Roman declamation. For declamation specifically in relation to the Satyricon, Wilson (2018), Kennedy (1979), and Wooten (1976).

Wilson, Philip Murray. 2018. Nihil ex his quae in usu habemus: The Meaning of Learning in the Satyricon of Petronius. Senior Honor Thesis. University of North Carolina at Chapel Hill.

5 thoughts on “declamation in Satyricon’s school of rhetoric: a gendered perspective”