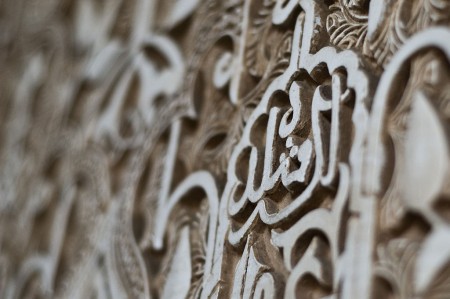 Somehow sensing his absence from their bed, ibn Rawahah’s wife awoke. She dressed and went in search of him. She espied him having sex with their maid. Enraged, she ran to the kitchen, grabbed a knife, and ran back to the maid’s quarters. She was ready to kill her husband.

Ibn Rawahah and the maid finished their sexual activity. When ibn Rawahah was returning to his room, he encountered his wife carrying a kitchen knife. He asked what she was doing. She answered:

If I had caught you now where I saw you before, I would have plunged this knife right between your shoulder blades!

She said that she saw him on top of the maid. He responded:

You did not see me thus, {and I can prove it}: for the Messenger of God has forbidden us to recite the Qur’an when we are sexually impure.

His wife then challenged him to recite the Qur’an. Ibn Rawahah recited:

The Messenger of God came to us
declaiming his Book,
Like the brilliant flash of the rising dawn,
He came bearing guidance in wake of the darkness,
And our hearts are sure
that what he said is the truth.
All night long he jumps up out of bed,
While the polytheists sleep soundly!

Ibn Rawahah’s wife mistakenly thought that her husband had recited actual Qur’anic verses and thus could not have just concluded sexual activity. She apologized to him and exclaimed, “I believe in God! My eyes are mistaken!” The tale concludes:

The next day, ibn Rawahah went to see the Prophet and told him all that had transpired. The Messenger of God laughed so hard that you could see his molars.

European literature, like other literature from around the world, contains many tales of wives guilefully cuckolding their husbands. Stories of husbands guilefully saving themselves from their wives’ premeditated domestic violence are much more rare.

Islamic learning was pivotal to ibn Rawahah’s guile. The story of ibn Rawahah is recorded in the writings of al-Qurtubi, a thirteenth-century Islamic scholar from Córdoba. Hammam ibn Munabbih, an Islamic scholar who died in 748, preserved a related saying of Jesus:

Jesus saw a person committing theft. Jesus asked, “Did you commit theft?” The man answered, “Never! I swear by Him than whom there is none worthier of worship.” Jesus {then} said, “I believe God and falsify my eye.” [2]

Ibn Rawahah’s wife apparently followed this saying of Jesus. Jesus is a highly respected prophet in Islam. Appreciating sayings of Jesus, however, isn’t sufficient to avoid being intimately deceived by one’s spouse. In the story of ibn Rawahah, lack of Islamic learning (knowledge of the Qur’an) enabled ibn Rawahah’s wife to be deceived.

The story of ibn Rawahah helps to enlarge listeners and readers understanding of the world. While women are generally superior in guile to men, men too are capable of guile. Being able to laugh is necessary to receive the truth.

[1] The story is from Qurtubi, V, pp. 182-83, from Arabic trans. Maghen (2008) pp. 337-8. All the quotes above, except for the final one, are from id. I’ve made some minor modernizations of the English. Ibn Rawahah is more fully named ‘Abdullah ibn Rawahah ibn Tha’labah. Id. uses the variant transliteration ibn Rawaha. In relation to ibn Rawaha, the maid was one “whom his right hand possessed.” Hence “this was probably a licit act of concubinage.” Id. p. 337.

[image] Detail from a wall of the Palacios Nazaries in the Alhambra, Granada, Spain. Thanks to Alexandre Buisse and Wikimedia Commons.