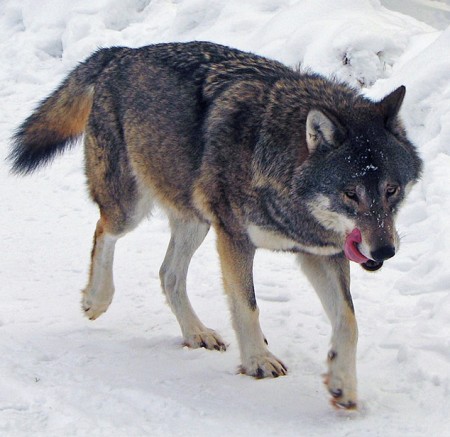 We will soon see if the wolf knows how to guide the sheep better than the sheep did the wolves. [1]

The wolf and wolves in this metaphor are, respectively, Filostrato and the men of the group (the brigata).  The sheep are the women.  Neifile’s metaphorical mixing is pure in abasement.  In the Decameron, wolves are vicious, and sheep are stupid and in need of guidance.[2]  Neifile’s quip spurs jousting between Neifile and Filostrato over whether men’s or women’s sexuality is more wolfish.  Neifile triumphs with the claim that women’s sexuality is more wolfish.

Neifile seems to be taunting Filostrato with his hunger for love.  Filostrato understands himself to be enslaved in unhappy, unrequited love for an unidentified woman of the brigata.  An unidentified man of the brigata loves Neifile.[3]  Filostrato’s passion may be for Neifile.  Neifile orders stories on the theme “people who have relied on their resourcefulness to acquire something they really desired or recover something they had lost.”  Filostrato rigidly adheres to gynocentric rules for love and fails to recognize better ways for men.  In his misery, he orders stories on the theme “those whose love came to an unhappy end.”

Had they listened to me, the wolves would have taught the sheep how to put the Devil in Hell no worse than Rustico did with Alibech.  But you should not call us wolves, since you have not been acting like sheep. [4]

Filostrato is a complete failure in love.  If the other men of the brigata listened to Filostrato’s love advice, which they didn’t, they too would be bitter and frustrated in love.  Dioneo, who lived his life surrounded by women, understands much better how to seduce women.  Moreover, Neifile’s metaphor of wolves and sheep is poorly made.  Filostrato adds to the metaphorical muddle (wolves teaching sheep?) and then complains about the inaptness of the metaphor.

Neifile silences Filostrato with her retort.  She says to him:

if you men had tried to teach us to put the Devil in Hell, you might have learned a lesson from us the way Masetto da Lamporecchio did from the nuns, for you would have recovered your ability to speak at just about the time when the wind would have been whistling through your hollow bones. [5]

In Day 3, Story 1 of the Decameron, Masetto sought a job as a gardener at a convent.  He pretended to be deaf-mute.  Recognizing a good opportunity, all the nuns and the Abbess secretly contrived to have sex repeatedly with Masetto.  Exhausted and unable to satisfy so many women, Masetto broke his silence and begged for a reduction in his sexual work.  Neifile’s retort suggests both that Filostrato wouldn’t have sought relief from continual sexual activity and that he wouldn’t have been able to endure in the flesh such activity.  Filostrato doesn’t respond to Neifile’s figure of women’s wolfish sexual nature.  In that sense, Neifile triumphs in their flyting.[6]

I am sending you out like sheep into the midst of wolves; so be wise as serpents and innocent as doves.

Persons with the inner nature of wolves are dangerous and to be avoided:

Beware of false prophets, who come to you in sheep’s clothing but inwardly are ravenous wolves.

Jesus was the good shepherd who protected the sheep from wolves:

Men figured as wolves are ravenous and dangerous.  Those aren’t good qualities for a guide.[8]  Figuring women as sexually ravenous makes women no better than men.

Women are no better and no worse than men.  With a bad metaphor and sexual antagonism, neither Neifile nor Filostrato understands that inner truth.

[6] Literary critics working as earnest apparatchiks have failed to recognize Boccaccio’s linguistic game with the bad metaphor of wolves and sheep:

Rather than being taken aback by his {Filostrato’s} innuendo, Neifile outdoes him by suggesting that he needs to be taught a lesson. … Neifile shows that she is a force to be reckoned with because she is in full possession of knowledge that would allow her to resist men’s advances.  By implication, she has overturned the paradigm of male mastery and female tutelage by informing him that women are not men’s pupils, eagerly awaiting their instruction. Neifile’s witty retory is so effective that she literally silences him, causing him to desist from his lecture

[8] While figuring Filostrato as a wolf, Neifile selects him as ruler for Day 4.  In Day 4, Story 2, Pampinea ironically describes Berto della Massa as having “changed from a wolf into a shepherd” in becoming Frate Alberto.  Frate Alberto preyed on the persons he pretended to shepherd.

[image] Wolf in a zoo in Stockholm, Sweden.  Thanks to Daniel Mott and Wikipedia.