Marie de France’s twelfth-century lai Equitan tells of equity and the man Equitan, judge and king of Nantes in Brittany. Equitan “delighted in pleasure and love-service {deduit amout e druerie}.” While this unmarried king devoted himself to women, hunting, and hawking, Nantes’s royal responsibilities were managed by Equitan’s seneschal:

A good knight, brave and loyal,
he cared for all the king’s land
and governed it and administered justice.

The seneschal had a beautiful, highly praised wife. King Equitan coveted her:

Many times he made greetings to her
and sent her gifts.
without seeing her, he coveted her,
and as soon as he could he spoke to her.
On his own to amuse himself,
he went hunting in the region
where the seneschal lived.
In the castle where the lady was
the king stayed the night
when he returned from his delight.
He was able to talk to her enough
to show her his feelings and his worth.
He found her very courteous and wise,
lovely in form and face,
attractive and amusing.

Equitan became love-sick for her. He knew that his love for her was wrong:

I think that I must love her,
and if I love her, I’ll do wrong —
she is the seneschal’s wife.
I should maintain love and faith toward him,
just as I want him to do toward me.
If by any means he found out,
I know well that it would upset him greatly.

The king, however, simply reasoned to his desire: she needs a lover, she would make me better, the seneschal wouldn’t be too upset to share her with me. While that’s the way reason works in our benighted age, it wasn’t generally so in the more enlightened Middle Ages. 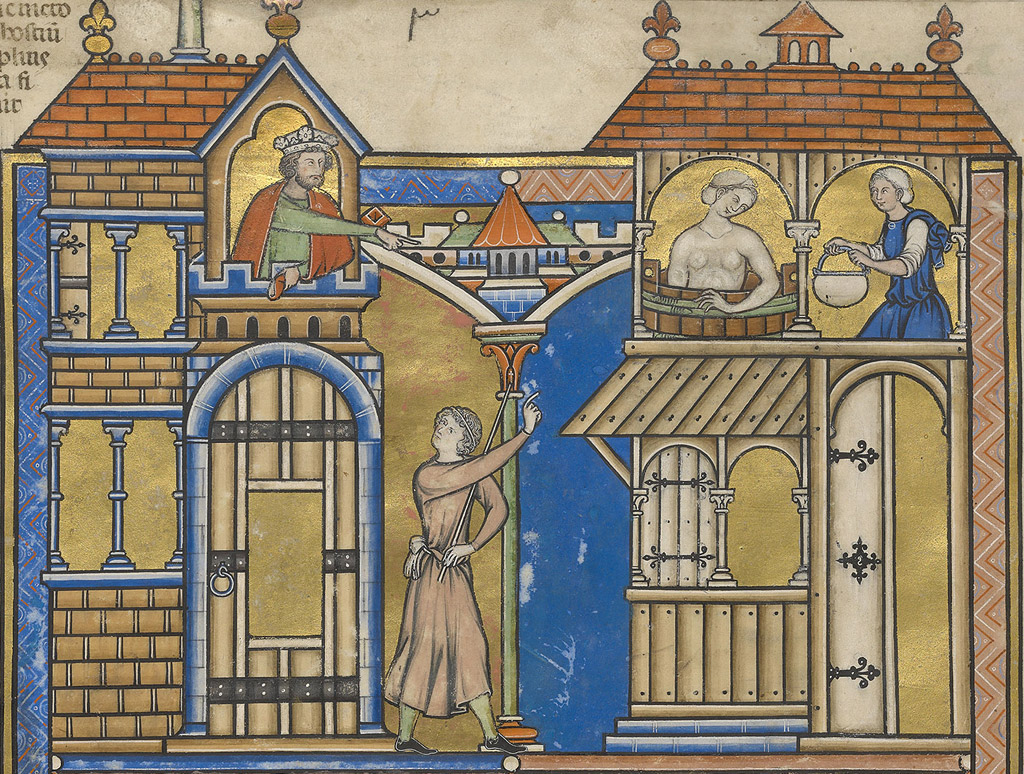 When the king told the seneschal’s wife of his love for her, she engaged in sophisticated reasoning. She said that she was concerned that he would love her and then leave her. She thus sought to get his love commitment in advance of their adulterous love affair. She was also concerned about gender equality in love:

If it were the case that I loved you
and granted your request,
the love affair would not be
equally shared between us two.
Since you are a powerful king
and my husband holds his land from you,
you would expect, I imagine,
to have dominion in love.
Love is not worthy if it is not equal.

Only one person can be the king of a city. Only one person can be the mega-billionaire founder and subsequent leading CEO of Microsoft. No one can be equal to persons in such statuses. Nonetheless, persons can be equal in love in the medieval Christian sense of a conjugal partnership. In considering an extra-marital affair with the king, the seneschal’s wife expressed no concern for her husband and their marriage.

Often among sophisticates, claims for equality obfuscate advantage-seeking. So it was with the seneschal’s wife. The king promised to abase himself in relation to her:

Do not consider me as a king,
but as your vassal and your lover.
I firmly swear and say to you
that I will do your pleasure.
Do not let me die for you.
You will be the lady and I the servant,
you the proud one and I the supplicant.

That was the type of gender equality that appealed to the seneschal’s wife. She and the king became lovers. They had many trysts during those times that the seneschal was away judging pleas and claims in court for the king.

The people were upset that their king Equitan was remaining unmarried. Their concern for him to marry upset the seneschal’s wife. She feared that he would marry a king’s daughter for political advantage. While medieval kings often had mistresses, she thought that he then would stop having trysts with her. Equitan comforted her:

Beautiful beloved, don’t be afraid!
I shall certainly never take a wife
nor leave you for another.
Know this for the truth and believe it.
If your lord were dead,
I would make you queen and lady.
No one could prevent me.

She thanked Equitan for this pledge of loyalty. She then declared that she would kill her husband if Equitan would help her. Showing that his subservience to her had no bounds, he affirmed his abasement to her:

Never will she tell him anything
that he will not do to the best of his ability,
whether it be foolishness or wisdom. 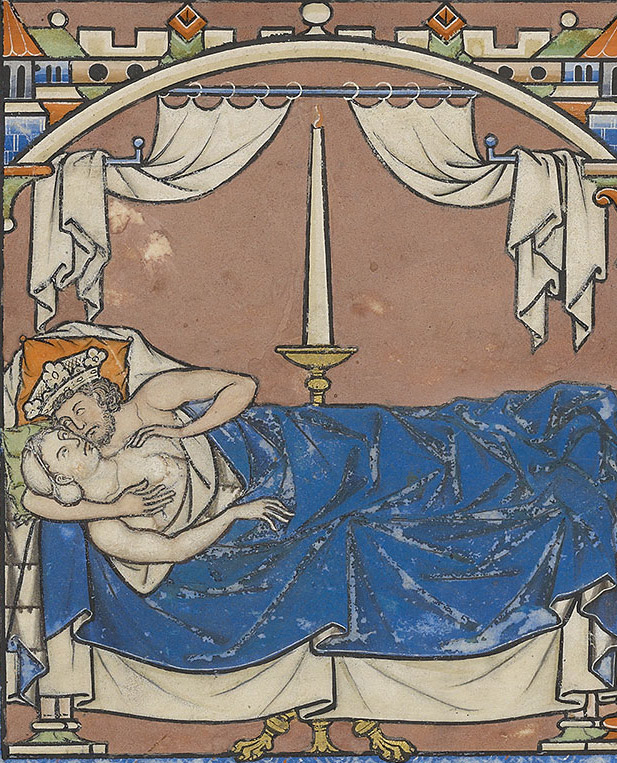 And I will have the baths heated
and the two tubs brought,
his bath so hot and so boiling
that there’s no living man under heaven
who wouldn’t be scalded and destroyed
as soon as he sat in it.
When he is dead and scalded,
send for your men and his.
Show them just how
he died suddenly in the bath.

That’s as ridiculous as the Old French farce The Washtub {Le Cuvier}. The seneschal’s death by scalding would be obvious from his dead body. Then people would ask who set up the scalding bath. Perhaps the king would have tried to prevent any consideration of who murdered the seneschal.

He found the king and his wife
where they lay embracing one another.
The king looked and saw him coming.
In order to disguise his wickedness,
he jumped feet first into the tub,
and he was naked and unclothed.
He never paused to take care,
and there he was scalded and died.
The evil turned back on him,
and the other was safe and sound.
The seneschal saw well
what happened to the king.
He took his wife at once
and put her head first into the bath.
Thus they both died,
the king first, and she with him.

Men have long been punished much more harshly than women for adultery. Marie de France, a great medieval woman writer, had a keen sense for gender and justice. While the king was subservient to the wife in their adulterous affair, both were punished with death. The king, an accomplice to the murder, went into the scalding water feet-first. The wife, the mastermind of the scheme, went into the scalding water head-first. That’s rough justice administered by the seneschal, the person actually responsible for administering justice in the realm.[4] He surely provided more equitable justice than the U.S. criminal justice system currently does.

Marie de France positioned the seneschal’s wife as a cross-gender reference to King David of the Hebrew Bible. David saw Bathsheba bathing and lusted for her. He sent messages to her. She then came to him and had sex with him. After they made her pregnant, he had her husband killed. Her husband had loyally served King David as a soldier, just as the seneschal had loyally served King Equitan.[5]

Marie de France offered her readers an additional example with more critical understanding of gender than that in the story David and Bathsheba. She wanted her readers to learn to be reasonable:

Whoever might listen to reason
could learn by the example here:
one who pursues another’s harm
might find the wrong rebounds on her.

Equitan has survived in only one other manuscript, denoted MS S: Bibliothèque nationale de France, nouv. acq. fr. 1104 (view online). There this lai is entitled Aquitan. For a comparison of the MS H and MS S, and an edition of the latter, Brook (2018).

[3] Bussell called Equitan “feminized” because he was subservient to his wife, as well as because he sought to enjoy his life. Bussell (2003) pp. 36-8. That rhetoric by definition obscures men’s subordination to women and accepts gender ideology reducing men to instrumental beings. Moreover, while lamenting “gender opposition,” Bussell placed women outside of “rhetorical gamesmanship”:

The unflinching punishment of the woman as both a traitor and an adulteress, however, simply reinforces the rhetorical gamesmanship between men without examining either its causes or its progression toward a bad end for everyone.

Id. p. 37. Women arguably are more skilled and more effective in rhetorical gaming than are men.

The seneschal killing his wife for her adultery with the king probably would have shocked Marie de France’s contemporary audience. Such extreme punishment, or the lesser punishment of genital mutilation, was much less acceptable to apply to women than to men. Cf. Bussell (2003). Men continue to be much more likely be subject to the death penalty than women are.

The seneschal killing his wife for her adultery has also tended to shock and dismay modern audiences. “No other lai of Marie de France has suffered more at the hands of critics than Equitan.” Pickens (1973) p. 361. Subsequent criticism, with some exceptions such as Murray & Yancey (2008), has been little better. Shoaf called Equitan “deeply misogynistic.” Shoaf (1992) p. 9, n. 6. One could in turn call Shoaf’s view deeply anti-meninist, but it’s better not to engage in childish name-calling. Marie de France was a medieval women writer with compassionate concern for men.

[5] Murray & Yancey (2008) perceptively pointed to the relation of Equitan to the story of David and Bathsheba. But Murray & Yancey’s evaluation of the seneschal’s culpability and future isn’t warranted:

unless he finds a way to conceal his sinfulness (as David did), he will be condemned for treason and put to death for murdering the king. Marie leaves the seneschal facing a very similar dilemma to that faced by David in the Old Testament: own up to his treachery, or find a way to conceal it.

Murray & Yancey (2008) p. 39. The seneschal didn’t murder King Equitan. Nor is he likely to be put to death for Equitan’s death. The seneschal more likely would remain chief executive of the realm and play a key role in selecting the new king.

The Bible doesn’t say whether Bathsheba privately urged David to have her husband killed. In accordance with women-are-wonderful ideology, scholars typically haven’t considered that possibility.

[6] Leading English translations of Equitan, vv. 309-10, have directed that couplet at men in its gender:

one who pursues another’s harm
might find the wrong rebounds on him.

Old French text (following MS H exactly) and translation of Waters (2018). Burgess & Busby (1999) also translates “rebounds on him {revert sur lui}.” Kline (1999) uses two masculine pronouns in translating the couplet. Shoaf (1992) deploys three masculine pronouns in translating it. But the Old French lui comes from the Latin ille. Neither implies a particular gender. Within the overall text of Equitan and Marie de France’s appreciation for gender, sur lui seems to me best translated here as “on her.”

Bussell, Donna Alfano. 2003. “The Fantasy of Reciprocity and the Enigma of the Seneschal in Marie de France’s Equitan.” Le Cygne. 2: 7-48.

Kline, A. S. 2019. Equitain. In Marie de France: The Twelve Lais. Online at Poetry in Translation.